Mexico saw more murders in 2018 than any other year since nationwide records began some two decades ago, according to the country's Interior Ministry. Mexico might soon get a national guard tasked with combating crime. 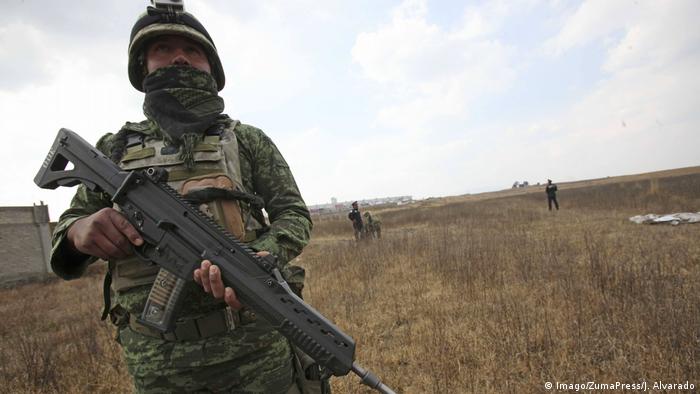 With drug-related crimes and gang violence rife across Mexico, investigators opened 33,341 murder probes in 2018, setting a new record, according to the latest data published by the nation's authorities. Men make up the overwhelming majority of the victims, with 861 women losing their lives last year.

The number of murders logged in 2018 is also the biggest since the national records began in 1997.

The data showed a total increase of some 15.5 percent compared to all murders in 2017. Mexico logged 28,866 murders in 2017, far outpacing the much larger US where the FBI noted 17,284 instances of "murder and non-negligent manslaughter" during the same time.

Mexico's population is about 130 million, compared to the US population of about 326 million.

Despite Mexico's prolonged crackdown on drugs, the authorities have so far failed to rein in organized crime in the Latin American country. The country is especially focused on drug cartels which smuggle and sell illegal substances on the lucrative American market. In turn, cartel leaders use bribery and intimidation to expand their influence among state employees. More than 200,000 people have been killed since the government deployed the military to fight drug traffickers in 2006, including politicians, reporters, and law enforcement officials.

More than 90 percent of all violent crimes go unpunished in Mexico.

On Monday, Mexican officials announced that the first journalist has been killed in 2019. Local radio station director in Baja California Sur, Rafael Murua, was found dead in a ditch after receiving work-related death threats. The 34-year-old enrolled in a state protection scheme after a local mayor threatened him in 2017. Murua was threatened again when a new mayor took office in December, according to media reports.

Under former president Enrique Pena Nieto, the government focused on taking out and arresting leaders of the crime syndicates, such as Joaquin "El Chapo" Guzman who is currently on trial in the US. However, critics say that this strategy fragmented the cartels and prompted infighting among feuding factions.

Mexico's new president Andres Manuel Lopez Obrador is currently pushing a new strategy to combat crime through the nation's legislature. The leader, who took office in December, wants to create a national guard which would take over a large portion of civilian police duties. The new force would also have civilian leadership, but many fear it would add to abuses and crimes which are reportedly often committed by members of the military.

Lawmakers in the lower house of Mexico's parliament backed the plan to create the national guard last week, but proponents of the bill still need to snatch a two-thirds majority in the Senate and win over half of Mexico's 32 state legislatures.