Opinion: A symbol of the US' decline as a world power 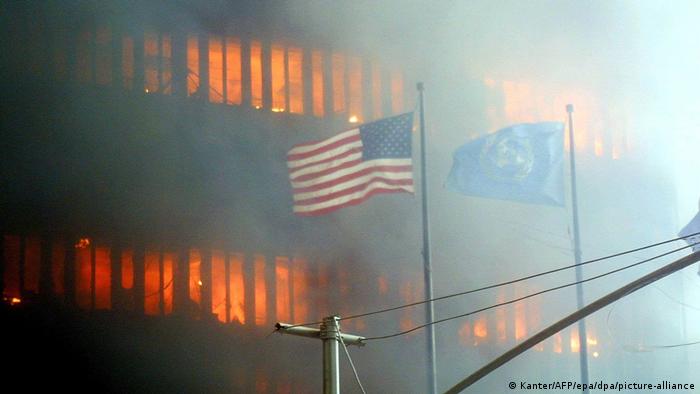 The 9/11 attacks in New York and Washington DC killed almost 3,000 people — and may have marked the end of an era

The terrorist attacks of 9/11 struck at the heart of America. In more ways than one. Never before had there been an attack of this scale on US soil. They were unprecedented both in the number of victims they caused and in the precision with which the terrorists destroyed major symbols of the country's economic and military world dominance in just an hour. It is probably only thanks to a handful of courageous passengers that a fourth plane did not end its deadly flight at the White House or the Capitol after the attacks on the World Trade Center and the Pentagon.

Today, 20 years later, the shock, the existential trauma, would seem almost forgotten — and certainly will have been by anyone younger than 30, who will have few memories of the day and its aftermath. But even for most of those Americans who live far from New York and Washington, DC, the whole train of events has been consigned to history.

DW's Ines Pohl is based in the US

Airport security measures might still be a pain, but people have become used to the long queues, take off their shoes without question and are used to paying exorbitant prices for a bottle of water once they have cleared security.

The 20th anniversary of the attacks would probably have made little difference to this virtual historical oblivion. But then President Joe Biden linked the US' withdrawal from Afghanistan to the fateful date of September 11. He said that all US troops would have left the country by that date this year. He probably did so in a bid to suggest that the mission had been brought to a successful conclusion.

Afghanistan is far from being a success

But in view of thefootage from Kabul, it is hard to talk about a foreign policy success. And on the domestic front, the ongoing debate about what to do with refugees from Afghanistan has once again fanned the flames of Islamophobia. Once again, as in the years directly following the attacks, Muslims have become political pawns who are being instrumentalized in the dirty election campaign ahead of the midterms. Images of the attack 20 years ago are being promulgated with precisely this intention.

It often makes sense to look at the past in order to understand the present. In September 2001, George W. Bush had not been president for even a year. He received a lot of approval for declaring he would use all necessary means to track down the person behind the 9/11 attacks, Osama bin Laden.

Billions flowed into the so-called war on terror. Intelligence agencies and the military received state-of-the-art equipment and plenty of funding. The narrative went that the US was at risk of external attack and everything must be done, once and for all, to put an end to the threat.

And at first, this narrative was largely accepted by the population.  But with each passing year, as the images of the collapsing towers continued to fade, the willingness to sacrifice more lives and funds on wars with seemingly no end in sight dwindled. The political elite was caught in a trap. It could no longer justify the wars by saying they were to combat terrorist networks, at least not since the 2011 killing of bin Laden in Pakistan.

So, gradually, the focus of justification efforts shifted towards the support of democratic forces with the goal of turning Afghanistan into a country with a Western form of government. As had happened with Vietnam, the US once again made the mistake of believing that it could export its political system and protect the world from communism, extremism and terrorism.

The dream is over

This dream is over. Biden has made clear that US foreign policy should serve only US interests. US military involvement will be scaled down even more. The president will devote himself to domestic needs such as improving infrastructure and tackling the climate crisis.

In terms of foreign policy, there is really only one issue that still carries weight for the US, which is its power struggle with China. In Syria, the US has already left the field to Russia and it is also holding back in Libya. Even Israel is trying to become less dependent on its strongest ally by building ties with the Arab states. It is unclear how long these new alliances might hold.

But in the meantime, many experts fear that the further the US moves away from the global game, the lower the barrier inhibiting states from carrying out preemptive strikes will become.

Twenty years after the terrorist attacks, the collapsing towers of the World Trade Center symbolize the disappearance of the world's global policeman. And they are an urgent warning that there will have to be new alliances if the emerging and widening vacuum is not to be filled by anti-democratic forces.