On your bike! Coronavirus prompts cycling frenzy in Germany | Germany | News and in-depth reporting from Berlin and beyond | DW | 19.05.2020

On your bike! Coronavirus prompts cycling frenzy in Germany

Long lines and sold-out stores: Bicycle shops in Germany have never been so busy. The bike is enjoying a surge in popularity as Germans seek to get out and about in safer ways during the coronavirus pandemic. 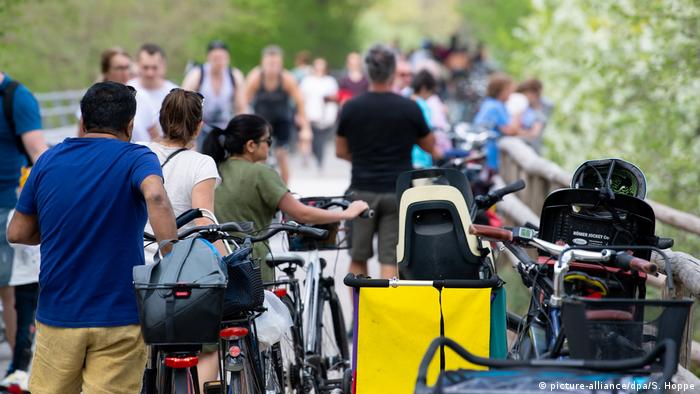 Seven-year-old Mats sits proudly on his bicycle. It's bright blue, just like his helmet, which sits firmly atop his head. "A real police bike," Mats beams as he buzzes through the shop like a police motorcycle, sirens blazing. Mats is lucky. Children's bikes are in short supply in many shops around Cologne. Even adults looking for specific models or parts are experiencing long wait times.

Demand is huge at the moment. "I will never forget the Monday when we reopened the shop," says Christoph Hopp, of Cologne's Radlager bike store. "It was like a dam bursting."

For weeks, bike shops were among the businesses in Germany forced to shut due to the coronavirus pandemic. Unfortunately, it was just as the annual uptick in springtime business was beginning.

"The minute the first crocuses stick their heads out of the ground, people want to get on their bikes," says Hopp. That's how it is every year, but "because of the closures this year, everything was obviously backed up." Now, the rush is "just crazy," he adds. 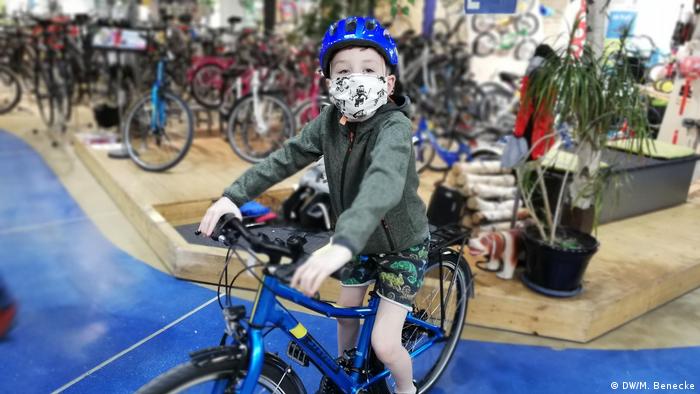 With children's bikes in short supply, Mats was lucky to find just what he was looking for

'The vehicle of the hour'

It's not just the beautiful spring weather and pent-up urge to shop that driving the surge in cycling.

"Because of the coronavirus, the bicycle is the vehicle of the hour," says David Eisenberger of the Zweirad-Industrie-Verband, or ZIV, an interest group that advocates on behalf of the bicycle industry in Germany. "We are noticing that not only on the streets but with the rush at bike shops."

Some people are riding bikes to escape cabin fever or stay in shape, while others want to avoid the mask requirement on public transportation. "That's why people are riding bicycles who perhaps may have previously taken the subway to work," says Eisenberger. In several major cities in Germany, bike paths have also been expanded. 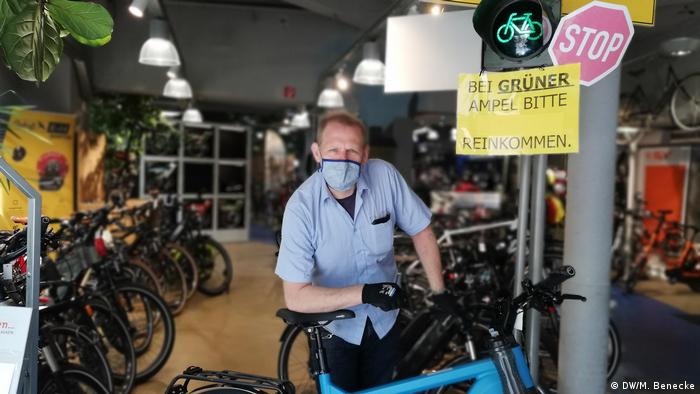 Christoph Hopp says when he reopened his shop in Cologne, 'it was like a dam bursting'

At the southern edge of the ring road that encircles central Cologne, traffic is picking up just as the workday is ending. A cyclist is forced to slam their brakes as a group of pedestrians steps into the path without looking. Just down the road, a young woman walks out of a shop with a new bike she just rented. "I can't go to work at the moment, I still have to work from home," says Ines. Because her fitness class is currently on hiatus, the 28-year-old is planning to cycle along the Rhine River, but she needed a new bike.

At Swapfiets [Dutch for "swap bikes" — the company got its start in the Netherlands — Editor's note], customers can rent a bike for around €20 ($22) a month. Repairs are free and the subscription can also be canceled at any time. "I don't know how long I am going to be staying in Germany, so the plan worked for me," says Ines.

The blue tires make Swapfiets bikes easy to recognize, and around 3,500 of them are currently on the streets of Cologne. In the past week, the company has seen a surge in customers.

"We experienced a real boom in the months of March and April of this year that isn't just down to the good weather and the beginning of biking season," Andre Illmer, the head of Swapfiets in Germany, told DW. 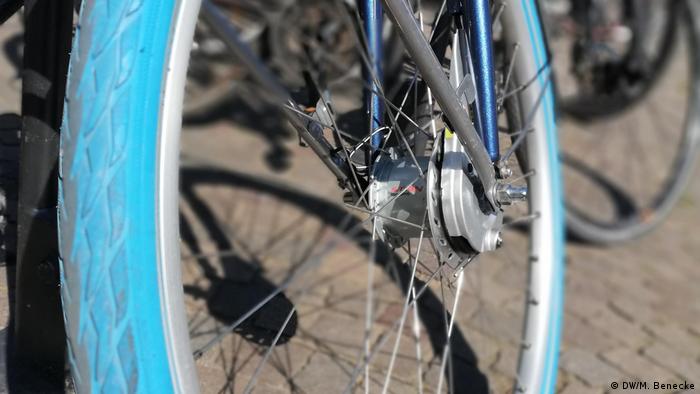 With their bright blue tires, Swapfiets bikes are easy to spot

Making up for lost business

In order to find out what's behind the boom, Swapfiets surveyed 741 new customers over the past few weeks. Some 42% of them said the coronavirus pandemic influenced their decision to start cycling. Of those polled, 45% believe that cycling is simply a better alternative when it comes to getting around — particularly because public transit has had to partially reduce its service.

Whether people are buying or renting, the bicycle business is currently doing well. Now it's up to people in the industry to make up for the weeks of lockdown-enforced closures and resulting loss in output.

"We expect that we can come out of this bruised but not battered," says David Eisenberg of the ZIV. "But only if the summer stays nice — and if there's not a second wave of infections."