Germany’s economy contracted 2.2% in the first quarter of 2020. With most of coronavirus lockdown measures taking place in the second quarter, experts expect future figures to be even worse. 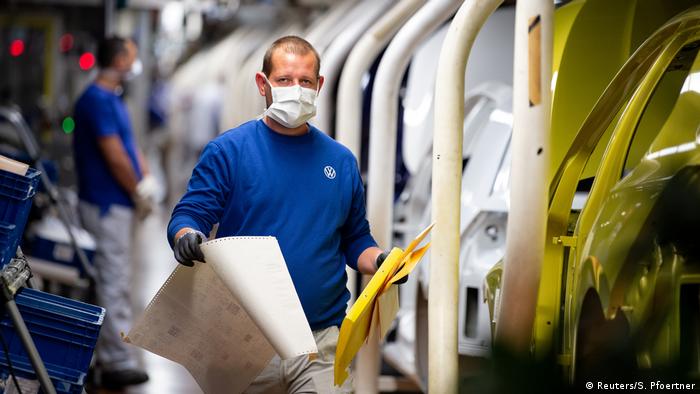 The German economy contracted 2.2% in the first quarter of 2020, the worst result since the 2008 financial crisis.

Experts had expected a contraction of around 2%.

The latest data, released by the federal statistics authority Destasis on Friday, also showed revisions to 2019 fourth-quarter figures from zero growth to a contraction of 0.1%.

This means Germany is now in a recession, defined as two consecutive quarters of negative economic growth.

The first quarter figures are only a partial indication of how much the pandemic has harmed Europe's largest economy.

Effects of the lockdown

Coronavirus lockdown measures were introduced in mid-March, just two weeks before the end of the first quarter.

In an attempt to curb the spread of the deadly virus, Germany had imposed restrictions to public life that brought production lines to a halt and shuttered many business and retail locations.

These measures, which remained in place through early May, drastically reduced exports and consumer spending.

Private consumer spending "declined sharply", the statistics agency said, as did spending on industrial equipment, including machinery and vehicles. Exports and imports both fell drastically compared to the fourth quarter.

Private consumer spending "declined sharply," the statistics agency said, as did spending on industrial equipment, including machinery and vehicles. Exports and imports both fell drastically compared to the fourth quarter.

Government spending had a stabilizing effect on the economy, which prevented the contraction from being even worse, Destasis said.

Employment figures remained stable in the first quarter. The coronavirus outbreak had only a "modest" effect on employment between January and March, the agency said, partly thanks to Germany’s reduced-working-hours program, which allows firms to keep workers at home without laying them off.

German’s economy is particularly dependent on industrial exports, an area that had been suffering prior to the COVID-19 outbreak duue to instability brought on by Brexit and the US-China trade dispute. Industrial orders fell over 9% between February and March, the biggest drop since 1991. The economy recorded zero growth in the last quarter of 2019.

Responding to the figures, Economy Minister Peter Altmaier said economic contraction is expected to accelerate in the second quarter due to the coronavirus. While indicators did not reveal any sign of hope in April, there was a palpable sign of a turnaround at the beginning of May, he said.

GDP is expected to shrink even further in the second quarter, with some economists saying its could contract by 10%.

Despite easing lockdown measures, the German government remains pessimistic about the economic outlook this year.

Officials have predicted a 6.3% contraction for 2020. If so, this would put Germany in its worst recession since records on quarterly GDP figures began in 1970.

The eurozone economy also took a hit in the first quarter. The statistics agency of the European Union, Eurostat, on Friday reported that overall economic performance of the 19 countries that use the euro fell 3.8% from the last quarter of 2019, the largest quarter-on-quarter drop since 1995. The economy of the EU also saw a drop of 3.3%.

The economic impact of the coronavirus crisis means Germany can expect €81 billion less in tax income this year than predicted. The finance minister said he is confident they can "bazooka" the economy back to life. (14.05.2020)

EU officials have forecast "the deepest economic recession" in the bloc's history as a result of the coronavirus. Failure to agree on common solutions for the post-pandemic recovery could undermine the European project. (06.05.2020)