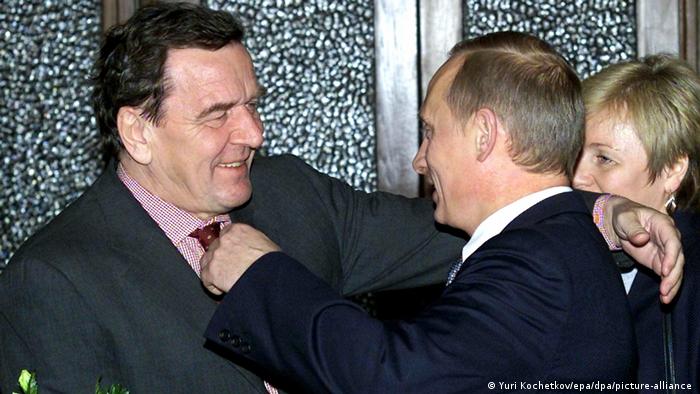 Schröder's relationships with Putin and Russian energy companies have led to a bevy of criticism inside Germany and beyond and have become ever more embarrassing to the German state since Russia invaded Ukraine last week.

On public broadcaster ZDF, Scholz said: "I find that it is not correct for Gerhard Schröder to hold these offices. And I think it would be correct for him to give them up."

Scholz emphasized that even as a private citizen, Schröder is a former head of state, making his business affairs more than a private matter.

Scholz added, "This obligation does not end when one no longer holds the office, but it also continues."

Scholz said he hopes allies of Schröder's can "convince him to reconsider his decisions from the past."

Who is Gerhard Schröder?

From 1998 until 2005, Schröder served as chancellor of Germany. After Angela Merkel succeeded him in the Chancellery following the federal election in 2005, Schröder took a position at Nord Stream in 2006.

Four members of Schröder's office quit earlier in the week due to his connection with Russian state-owned firms.

Bundesliga football club Borussia Dortmund stripped him of an honorary membership to the club it had bestowed upon the former chancellor.

Why is Germany's Russia policy having a difficult moment?

While Germany is in both the EU and NATO, Berlin had long sought to maintain good ties with Moscow due to the country's energy needs and business relationships.

On Sunday, Scholz effectively rewrote Germany's Russia policy following the invasion of Ukraine by sending anti-tank missiles and surface-to-air missiles in security assistance to the Ukrainians as well as €100 billion in investments to shore up the German military, the Bundeswehr.

The reversal, particularly on arms export policy, is notable as previously Germany said it would refuse to send weapons to a conflict zone.

Apart from having a former head of state perceived as uncomfortably close to Moscow, last week, several former senior leaders of the German armed forces said the country's military is not prepared for the new security challenges.