The US president has visited Saudi Arabia, where he offered his condolences for the late king. Obama also held his first formal talks with the newly enthroned King Salman. 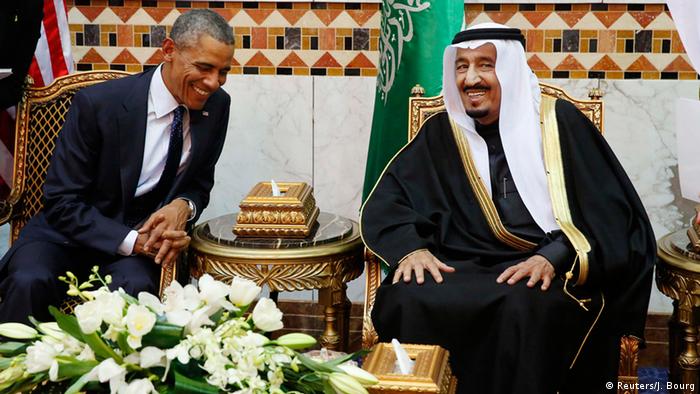 President Barack Obama was in the Saudi Arabian capital of Riyadh on Tuesday, leading an array of current and former US statesmen to pay their respects to late King Abdullah and to hold talks with his brother, the new King Salman (pictured).

The US dignitaries, some of whom flew in separately from Obama, included current Secretary of State John Kerry and several prominent Republicans including Condoleezza Rice and James Baker II, both former secretaries of state, and Senator John McCain. CIA head John Brennan was also in attendance.

Air Force One landed at King Khalid International Airport, where the president and first lady, Michelle Obama, disembarked onto red carpet to a Saudi welcoming delegation that included King Salman and his younger half-brother Muqrin, the heir to the throne. In stark contrast to the niqab, or face veil, and long black abaya worn by Saudi women in public, Michelle Obama left her hair uncovered and wore dark blue slacks.

The two leaders talked privately for about an hour, and the discussion focused mainly on security issues, such as sectarian divisions in Iraq, the campaign against the "Islamic State" jihadists, the precarious situation in Yemen and support for the Syrian opposition fighting President Bashar al Assad.

The situation in Syria has at times strained relations between the two nations, as Saudi Arabia, like most governments in the area, wishes to get rid of the Assad regime. The late Abdullah had more than once pressed the US to take more aggressive action to force Assad from power.

Humans rights issue not on the agenda

Obama had to cut short his trip to India for the Riyadh meeting, but before he left he defended the government's willingness to cooperate so closely with Saudi Arabia despite human rights concerns. Obama told a CNN reporter that he felt the best course was to apply steady pressure about human rights "even as we are getting business done that needs to get done."

"Sometimes we need to balance our need to speak to them about human rights issues with immediate concerns we have in terms of counterterrorism or dealing with regional stability," the president said. The talks with King Salman are likely to cover the ongoing crises in Syria and Yemen.

He added that he would not be raising US concerns over the flogging of liberal blogger Raif Badawi, who was sentenced to 10 years in prison and 1,000 lashes for insulting Islam: "On this visit, obviously a lot of this is just paying respects to King Abdullah, who in his own fashion presented some modest reform efforts within the kingdom."

After his conversation with King Salman, an official speaking anonymously said the president had "raised the issue of human rights with the king but did not discuss specific cases."

Abdullah died at the age of 90 on Friday. His Muslim-only funeral was attended by several region leaders, with Western leaders and dignitaries coming in over the following days to offer their condolences and meet the newly enthroned 79-year-old Salman.

Despite occasionally deep ideological differences between the two nations, Saudi Arabia is a key US ally in the region.