Obama: US could be India's 'best partner'

US President Obama says America could be India's "best partner" as he concludes his three-day visit to New Delhi. He used the opportunity to push India to fulfill its pledge to uphold the "dignity of the individual." 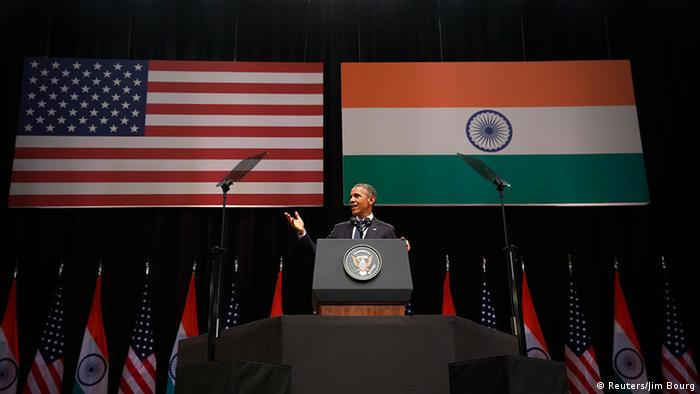 Speaking to an audience of 1,500 young people, US President Barack Obama reiterated that the relationship between Washington and New Delhi "can be one of the defining partnerships of this century," but cautioned the fight against climate change would be doomed if India was not prepared to commit themselves.

"India and the United State are not just natural partners - I believe that America can be India's best partner," Obama told the crowd, which included Nobel Peace laureate Kailash Satyarthi at the Siri Fort auditorium in New Delhi.

Obama also used the opportunity to speak about freedom to practice one's religion, the rights of women and the need for every child to be given an equal opportunity.

"Our world is strongest when we uphold the dignity of all, including of our women," Obama said.

Gently nudging India to fulfill its constitutional pledge to uphold "dignity of the individual," Obama drew on his experiences growing up as a member of a minority in the US.

"There were moments in my life where I've been treated differently because of the color of my skin," the president added, noting the importance of religious tolerance.

The president's speech Tuesday wrapped up his visit to the Asian nation which has seen an upturn in relations with the US in recent years, including the ratification of a new "friendship" declaration between Obama and Prime Minister Narendra Modi.

The highlight of Obama's three-day visit was his attendance as chief guest at Monday's Republic Day parade, the anniversary of India's democratic constitution taking force in 1950, one of the highest honors India can grant a foreign leader.

Later on Tuesday, Obama will fly to Saudi Arabia to pay his respects to the late King Abduallah who died on Friday.

Indian Prime Minister Narendra Modi has brokered a deal with US President Barack Obama to move towards a commercial nuclear power agreement. Both countries came to an agreement in 2008 that stalled due to legalities. (25.01.2015)