King Abdullah of Saudia Arabia has died, aged around 90. His 79-year-old half-brother, Crown Prince Salman, has ascended to the throne of the oil-rich kingdom at a time of great regional turmoil. 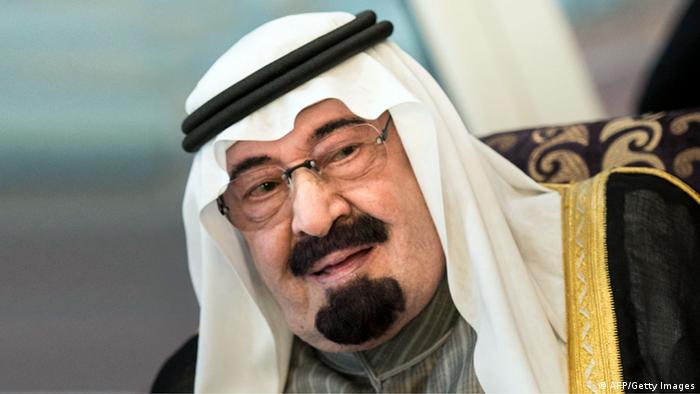 "His Highness Salman bin Adulaziz al Saud and all members of the family and the nation mourn the Custodian of the Two Holy Mosques King Abdullah bin Abdulaziz, who passed away at exactly 1 a.m. (2300 UTC) this morning," a statement attributed to Crown Prince Salman read.

Salman, who is King Abdullah's half-brother, is the country's new king. There had been speculation that his poor health might prevent him from taking the throne.

'Courage of his convictions'

US President Barack Obama was among the first world leaders to express his condolences.

"As a leader, he was always candid and had the courage of his convictions," Obama said in a statement, praising his "steadfast and passionate belief" in close ties with Washington.

King Abdullah was born in Riyadh in 1924, one of the many sons of King Abdulaziz Al Saud, who founded Saudi Arabia in 1932.

In the decades before he became the ruler of the nation, he held a variety of political posts, eventually becoming first deputy prime minister in 1982.

He officially became king in 2005. However, his ascension to the throne was preceded by a nearly decade-long tenure as de facto leader due to his half-brother King Fahd's inability to rule after suffering a stroke in 1996.

King Abdullah's rule was characterized by a strong presence in the region and at home.

As leader of one of the world's top oil exporters and of an ultraconservative Sunni Muslim nation, the Saudi king used his money and influence to form a stronger alliance with Washington in the face of power grappling in the Middle East and Central Asia.

He also used Saudi Arabia's oil wealth to fund mosques around the world, many of which have been found to promote extreme views.

In the wake of the 9/11 attacks, King Abdullah strengthened ties with US President George W. Bush - even though 15 0f the 19 hijackers were Saudis.

Saudi Arabia subsequently led a campaign against al-Qaeda in 2003 when the terrorist organization attempted to weaken the kingdom. The militants fled after a three-year battle against Saudi forces, moving south into Yemen, where they formed a new stronghold.

He was a strong opponent of Shiite-ruled Iran and by proxy, Tehran's Syrian ally, President Bashar al-Assad. Saudi Arabia's backing of the Syrian opposition has drawn criticism in recent years, on the grounds that it allegedly funded terrorist organizations.

At home, King Abdullah left a legacy both as a modernizer and a traditionalist.

Critics point to Saudi Arabia's dismal record on human rights, particularly regarding women. But the late ruler did promote an expansion of women's rights to education and participation in politics.

In 2009, he launched the country's first co-ed university. He also advocated the appointment of women to serve on the Shura Council, which advises the government on new laws.

Despite these signs of progress, the king, like other regional monarchs, opposed the Arab Spring. In 2011, authorities clamped down on activists and crushed demonstrations.

His successor, Salman, reportedly holds a reputation as a moderate who might follow a similar course to the late king's.