The US president has hailed German Chancellor Merkel's "moral leadership" among a slew of crises in Europe. But as Obama arrives in Germany to secure key aspects of a transatlantic trade deal, he faces opposition. 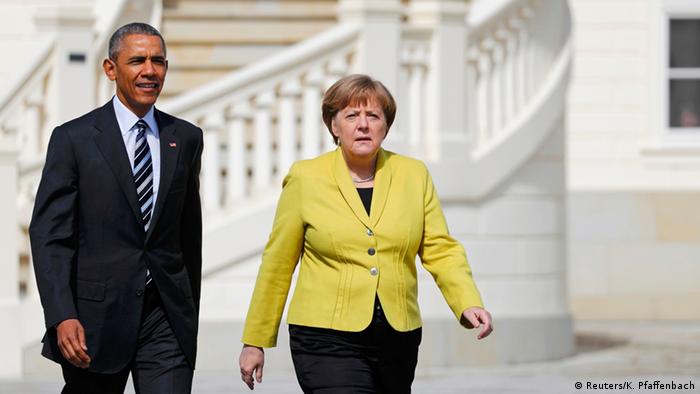 US President Barack Obama arrived Sunday in Hanover in what is likely his last visit to Germany before leaving office in January.

He is expected to meet with his "friend" German Chancellor Angela Merkel upon arrival before opening the Hannover Messe, the world's largest industrial technology trade fair.

Demonstrators have taken to the streets of Hanover to protest a planned free trade agreement ahead of Obama's visit to Germany.

Prior to arriving, he hailed Merkel's leadership amid a host of politically-charged European affairs, including a wave of migration that has led to a political deadlock among EU members states on the question of refugees and asylum.

"She's demonstrated real political and moral leadership," Obama said in an interview with the German newspapers "Bild" published on Saturday.

"The politics around refugees and immigration is hard in any country, but I believe the best leaders are willing to take on the toughest issues, especially when it's not easy," the president added.

Obama is set to push for developments on the Trans-Atlantic Trade and Investment Partnership (TTIP) negotiations, he said in an interview with the BBC.

"There's still barriers that exist that prevent businesses and individuals that are providing services to each other to be able to do seamlessly," the president said.

"The main thing between the United State and Europe is trying to just break down some of the regulatory differences that make it difficult to do business back and forth," Obama added.

However, the trade deal has been met with strong opposition in Germany, with tens of thousands demonstrating against the TTIP in Hanover on Saturday.

German Economy Minister Sigmar Gabriel, who also serves as deputy chancellor, told the German business newspaper "Handelsblatt" that the trade deal would "fail" if Washington did not offer concessions.

"The Americans want to hold fast their 'Buy American' idea. We can't accept that. They don't want to open their public tenders to European companies. For me that goes against free trade," Gabriel said.

"If the Americans hold fast to this position, we don't need the free trade treaty. And TTIP will fail," he added.

This week, the G7 summit was held for the second time in the Alpine castle of Schloss Elmau in southern Germany. What makes the five-star luxury hotel so special? We found out.