North Korea has test-fired its fifth missile in less than two weeks. The launch came a day after US President Donald Trump said he had received a beautiful letter from Kim Jong Un apologizing for previous tests. 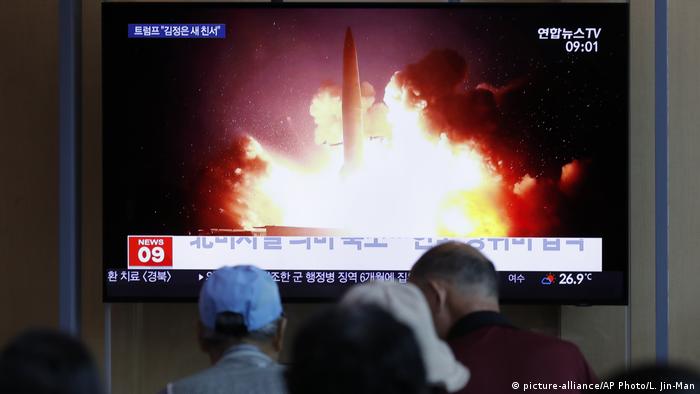 The missiles were launched near the northeastern city of Hamhung and flew 400 kilometers (250 miles), reaching a maximum altitude of 48 kilometers (30 miles) before crashing into the sea between the Korean Peninsula and Japan.

The regime has conducted five missile tests in the past two weeks in response to joint US-South Korean military drills, which began on Monday.

A North Korean state media report said leader Kim Jong Un personally supervised the testing of an unspecified new weapons system, and the country has claimed in the past that the joint military drills compel it to "develop, test and deploy the powerful physical means essential for national defense." The launch came a day after US President Donald Trump told reporters that he agreed with North Korea's opposition to the military drills after receiving a "very beautiful letter" from Kim Jong Un.

In a pair of tweets posted on Saturday after the missile launches, Trump went on to reveal further details of the letter. He said his North Korean counterpart had expressed an interest in meeting again to start negotiations over North Korea's nuclear program.

He also said that Kim Jong Un had offered a "small apology" for the previous tests that took place in recent weeks and had promised they would stop when the military exercises end.

Trump had also downplayed previous missile launches on Friday, when he said: "There have been no nuclear tests. The missile tests have all been short-range. No ballistic missile tests. No long-range missiles."

The South Korean military said there was a "high" possibility of further missile launches and that it was "monitoring the situation in case of additional launches while maintaining a readiness posture."

The European Union also condemned the North's latest missile test, saying it undermined global efforts to achieve peace on the peninsula. "We expect the DPRK [Democratic People's Republic of Korea] to refrain from any further provocations, abide by its stated commitments, and fully implement its international obligations as determined by multiple United Nations Security Council Resolutions," the EU said in a statement.

The EU also urged Pyongyang to take "concrete and credible" steps toward abandoning its nuclear and missile programs, and called for more talks.

North Korea says the joint US-South Korean military drills violate agreements made between Kim and Trump at their first face-to-face meeting in Singapore in June 2018. The US and South Korea scaled down the exercises following the summit.

The fallout comes amid an overall lack of progress in denuclearization talks since Trump and Kim's third and most recent meeting on June 30, at the Demilitarized Zone (DMZ) between North and South Korea.

North Korea has been supporting its weapons program using sophisticated cyberattacks to hack banks and cryptocurrency exchanges. The attacks are reportedly getting more sophisticated and harder to trace. (06.08.2019)

North Korea has fired off yet another round of short-range ballistic missiles, the third round of tests in a week. Earlier, Germany, France and the UK urged the regime "to take concrete steps" toward denuclearization. (01.08.2019)

The missile tests, which have been condemned by the German government, were in reaction to war games being conducted by the US and South Korea. The North has slammed the maneuvers as a violation of peace efforts. (06.08.2019)