After receiving a letter from Kim Jong Un, US President Trump said he was "never a fan" of joint US-South Korea war games. Trump indicated new talks could be ahead, even as North Korea continues to launch missiles. 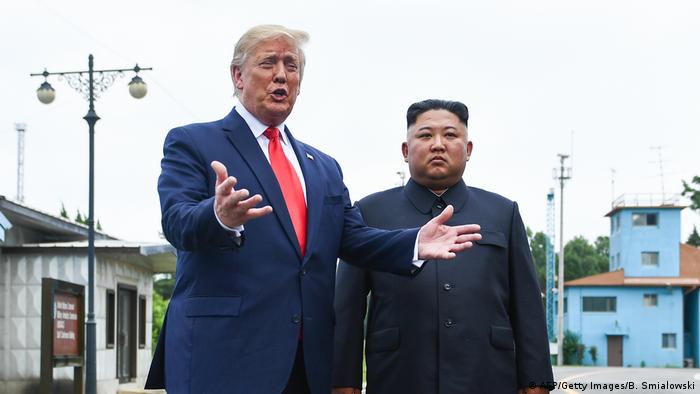 US President Donald Trump told reporters Friday that he received a three-page letter from North Korean dictator Kim Jong Un, and that the two would have more talks to resolve the impasse over Pyongyang's nuclear weapons program. Trump did not specify the contents of the letter, or when talks with Kim would resume.

Speaking to reporters,Trump said that the "really beautiful" letter was delivered by hand and that it was "very positive."

During his statements, Trump seemed to mirror North Korea's criticism of this month's joint US-South Korea war games, saying he has "never been a fan" of the maneuvers.

"I don't like paying for it. We should be reimbursed for it and I have told that to South Korea."

North Korea has repeatedly condemned the war games, saying they violate the tentative peace agreement with the US.

Trump has downplayed the significance of North Korea's recent missile launches, and has previously referred to the launches as "standard" and not in violation of any agreement the US has with North Korea.

North Korean missiles are seen as a significant threat to neighboring South Korea and Japan, both of which are US allies. The fact that Trump has downplayed Pyongyang's missile tests, while also criticizing military cooperation, has caused consternation in both Seoul and Tokyo.

Friendship for little in return

After threatening North Korea with destruction amid heightened tensions in 2017, Trump has taken a softer tone towards the rogue regime, while emphasizing his close personal relationship with Kim.

In June, during Trump's Asia trip for the G20 summit in Japan, the US president made a surprise stop at the demilitarized zone (DMZ) between North and South Korea.

When meeting Kim at the demarcation line, he called him "my friend" before becoming the first sitting president to cross into North Korea.

At the DMZ meeting, the two leaders agreed to restart the stalled negotiations. However, since June 30, North Korea has conducted four short-range missile launches.

And despite the 2018 Singapore summit, and February's summit in Hanoi, there has been little progress in resolving the key issues. The US insists on complete denuclearization, while North Korea has called for the US to lift sanctions.

Although Trump has often pointed to the cessation of long-range missile launches and nuclear weapons tests as a testament to his North Korea strategy, Pyongyang has also threatened to continue the tests as talks have stalled and US-South Korea war games continue.

According to international observers, North Korea has not yet given up any of its nuclear arsenal, or shown signs that it intends to begin dismantling its ability to produce nuclear weapons. Critics say that the regime in Pyongyang has been using the time provided by stalled negotiations to develop its weapons program, while the US gains little in return.