North Korea has fired off yet another round of short-range ballistic missiles, the third round of tests in a week. Earlier, Germany, France and the UK urged the regime "to take concrete steps" toward denuclearization. 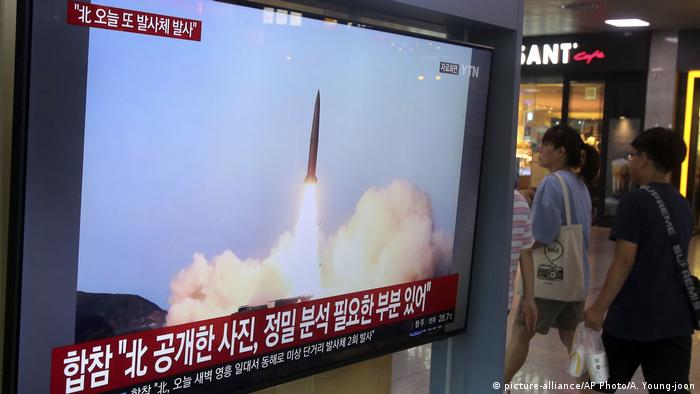 Germany, France and the United Kingdom have condemned North Korea for violating UN sanctions with its latest string of ballistic missile launches, and urged Pyongyang to engage in "meaningful negotiations" with the United States on denuclearization.

In Friday's early morning launch, the third round of missile tests in the span of a week, two short-range ballistic missiles were fired from North Korea's east coast 220 kilometers (135 miles) into the Sea of Japan, Yonhap reported.

They urged the North "to take concrete steps towards complete, verifiable and irreversible denuclearization."

Pyongyang confirmed Thursday that leader Kim Jong Un had supervised the first test firing of a new multiple rocket launcher system that could potentially enhance its ability to strike targets in South Korea and US military bases there.

North Korea is barred by UN sanctions from using ballistic missiles and on Thursday, the three European countries defended the sanctions.

"International sanctions need to remain in place and be fully enforced until North Korea's nuclear and ballistic missile programs are dismantled," Britain's UN Ambassador Karen Pierce said, alongside her French and German counterparts.

"It is vital that the Security Council shows unity in upholding its resolutions," she told reporters.

US Secretary of State Mike Pompeo said the Trump administration is still ready to resume talks with North Korea.

Trump and Kim Jong Un last saw each other in late June in an impromptu meeting at the Demilitarized Zone that divides the two Koreas.

On Thursday, the US president signaled he wasn't too concerned about the recent missile launches. "I have no problem, we'll see what happens but short-range [missiles] are very standard," Trump told reporters at the White House.

Since 2006, the 15-member Security Council has unanimously backed sanctions on North Korea, with the goal of choking funding for Pyongyang's missile programs. The sanctions have banned exports including coal, iron, lead, textiles and seafood, and capped imports of crude oil and refined petroleum products.

A trooper who risked his life crossing the Korean border has expressed his desire to defect. Unauthorized border crossings are rare with armed guards and landmines making the journey almost impossible. (01.08.2019)

North Korea has conducted two ballistic missile tests in less than a week, in violation of UN resolutions. The missile tests come as the US and North Korea are trying to restart stalled denuclearization talks. (01.08.2019)

North Koreans to return home after sailing to South Korea

Three North Koreans who sailed into South Korean waters with a white flag said the journey was a mistake. Relations between the two countries remains cool after North Korea tested a ballistic missile last week. (29.07.2019)