North Korea has conducted two ballistic missile tests in less than a week, in violation of UN resolutions. The missile tests come as the US and North Korea are trying to restart stalled denuclearization talks. 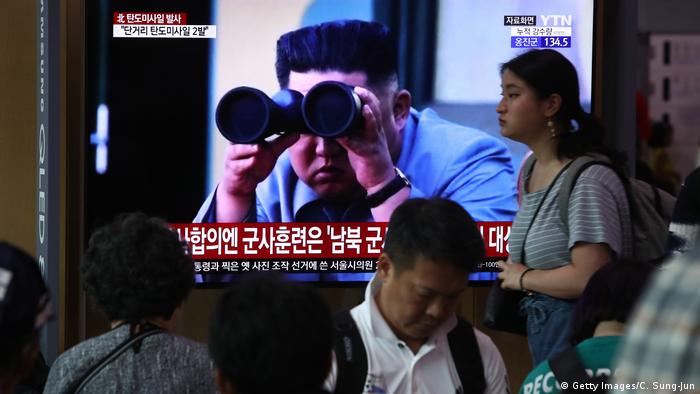 The UN Security Council will meet Thursday behind closed doors at the request of the United Kingdom, France and Germany, to discuss recent North Korean ballistic missile launches, diplomats said.

North Korea's state media agency, KCNA, said Thursday that leader Kim Jong Un supervised the test of a "newly developed large-caliber multiple launch guided rocket system" the day before. It reported the system would "play a main role in ground military operations" and create "inescapable distress to the forces becoming a fat target of the weapon."

The report contradicted the South's military assessment that the North tested two short-range ballistic missiles that flew about 250 kilometers (155 miles) at a height of 30 kilometers.

Wednesday's test followed similar ones six days earlier, which North Korea said were meant as a "solemn warning" to South Korea over its high-tech defense purchases and planned joint military exercises with US troops in August.

The test missile launches threaten to derail US-North Korea attempts to revive working-level talks on denuclearization following the June 30 meeting between US President Donald Trump and the North's leader at the Demilitarized Zone (DMZ) separating the two Koreas. It was the pair's third meeting in less than a year.

Trump and Kim had agreed at the DMZ to resume nuclear diplomacy in coming weeks, but that effort appears to have stalled.

North Korea has called for an end to joint US-South Korean military exercises as a precondition for denuclearization talks.

The Trump administration has sought to downplay the North's missile launches, saying they do not violate an agreement between the two sides committing the North to not conduct nuclear or intercontinental ballistic missile tests.

Pyongyang called the purported turnout a sign of the "single-minded unity" of its people. Voters are only allowed to select "yes" or "no" to a single candidate already chosen by the ruling communist party. (22.07.2019)

South Korean officials reported two projectiles being launched into the sea. A United States official has described them as "short-range." It comes as the North ramps up diplomatic pressure on Washington. (25.07.2019)