Kim Jong Un supervised the launch of "a new type of tactical guided weapon," North Korean media have reported, in a warning to Seoul. The US and South Korea have urged Pyongyang to avoid provocations and resume talks. 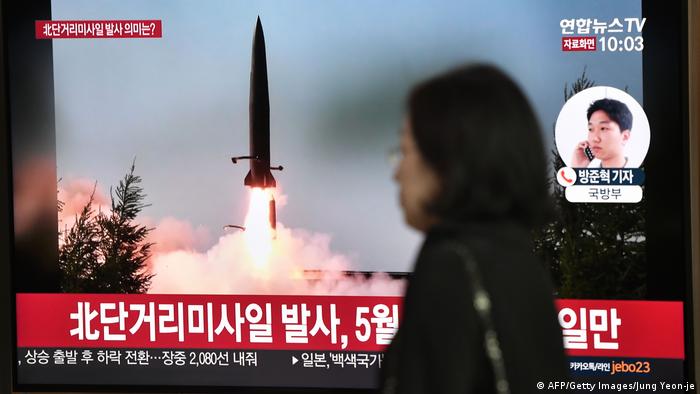 North Korea's test of "a new type of tactical guided weapon" was intended as a warning to South Korea over arms purchases and plans to hold military exercises, state media KCNA said Friday. On Thursday, South Korea's Joint Chiefs of Staff confirmed the launch of two new ballistic missiles into the waters off the east coast of the Korean Peninsula. The US said the missiles were short range.

The missile launch is the first by North Korea since the country's leader, Kim Jong Un, and US President Donald Trump  met late last month in the Demilitarized Zone (DMZ) in a bid to revive denuclearization talks.

KCNA did not mention Trump, but Kim reportedly criticized planned South Korean military drills that are usually conducted with US troops.

Kim accused South Korea of showing "strange double-dealing behavior" by talking peace, but then "behind the scenes, shipping ultra-modern offensive weapons and holding joint military exercises," according to KCNA.

The North Korean ruler was reported to have overseen the development of the missiles and the launch.

"We cannot but develop nonstop super-powerful weapon systems to remove the potential and direct threats to the security of our country that exist in the South," Kim said, calling the missile tests a "solemn warning to South Korean military warmongers."

North Korea has called for an end to joint US-South Korean military exercises as a precondition for denuclearization talks. On Thursday, the United States and South Korea urged Pyongyang to avoid escalating tensions and to resume working-level talks on denuclearization.

Asked about the short-range missile launch on Thursday, US Secretary of State Mike Pompeo told Fox Newsthat when Kim met Trump at the DMZ the North Korean leader had agreed to "avoid launching intermediate-range and long-range ballistic missiles" and "put his negotiating team back in the game."

Pompeo said the two sides could resume talks in the near future.

"I think we're still going to go sit down and have a conversation about this," Pompeo said. "North Korea has engaged in activity before we were having diplomatic conversations far worse than this — more importantly, far more dangerous for America and Japan and for South Korea than this."

"You know, lots of countries posture before they come to the table," he said.

Read more: North Korea: Fake news on both sides is the norm

Speaking at a banquet in his honor, Chinese President Xi Jinping wrapped up his visit to North Korea by praising economic development. However, he also issued a warning over efforts to denuclearize the peninsula. (21.06.2019)

Pyongyang called the purported turnout a sign of the "single-minded unity" of its people. Voters are only allowed to select "yes" or "no" to a single candidate already chosen by the ruling communist party. (22.07.2019)

Russia and South Korea give conflicting claims over airspace spat

Russia has said it didn't apologize for an alleged intrusion into South Korean airspace, contradicting earlier statements reported by South Korean media. The incident has triggered a diplomatic dispute in the region. (24.07.2019)