South Korean officials reported two projectiles being launched into the sea. A United States official has described them as "short-range." It comes as the North ramps up diplomatic pressure on Washington. 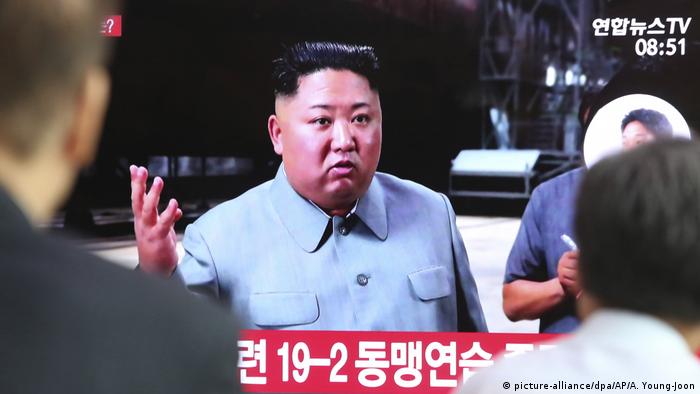 The ministers added that the projectiles originated from near the east coast city of Wonsan and went in excess of 430 kilometers (267 miles) before landing in the sea off its east coast.

The reported firing comes as US and North Korean officials work to restart nuclear talks, and as the North has also sharply criticized planned joint military drills between US and South Korean troops. The country had warned it might resume missile tests in protest at the drills, which it sees as a threat. North Korea's last weapons testing was in May.

"We have confirmed they were missiles. One missile flew 430 kilometers (267 miles) and the other is estimated to have flown a little further," the officials told AFP, adding that a joint analysis with the US was underway.

"It's not clear whether Kim Jong Un oversaw the launch on-site," the official said, referring to the North Korean leader.

"Our military is closely monitoring the situation in case of additional launches and maintaining a readiness posture," the South's Yonhap news agency quoted the Joint Chiefs of Staff as saying.

A United States official also confirmed the reports but refused to say when the incidents occurred.

The official, who wished to remain anonymous, said the White House was aware of a "short-range projectile launched from North Korea. We have no further comment."

President Trump’s security adviser John Bolton did not mention the launches when he tweeted in reference to "productive meetings" with South Korean officials on regional security and building a stronger relationship.

A Japanese government source, meanwhile, shed more light on the nature of the projectiles, saying they were short-range ballistic missiles.

The source said the missiles did not reach Japan's exclusive economic zone (EEZ) and had no impact on national security.

Nevertheless, Japanese Defense Minister Takeshi Iwaya told reporters the actions were "extremely regrettable," and that  "if they were ballistic missiles, that would violate a UN security council resolution."

"We will continue to make efforts to collect and analyse information while coordinating with the United States and South Korea," Iwaya added.

Pyongyang fired two short-range ballistic missiles into the East Sea on Sunday, according to South Korea's military. It comes a day after the North condemned a planned joint naval exercise between the US and South Korea. (13.07.2014)

More progress has been made to end the Korean conflict under US President Donald Trump than in 60 years. If Trump's unconventional approach secures peace, he deserves recognition for it, writes DW's Alexander Freund. (30.06.2019)

US President Trump and North Korean leader Kim have met once again, this time in the Demilitarized Zone. In a largely symbolic meeting, Trump and Kim hailed their personal close relationship amid stalled nuclear talks. (30.06.2019)