On a trip to Israel, US national security adviser John Bolton has warned Iran and said the US military was rebuilt and "ready to go." Increased US sanctions on Iran are expected on Monday. 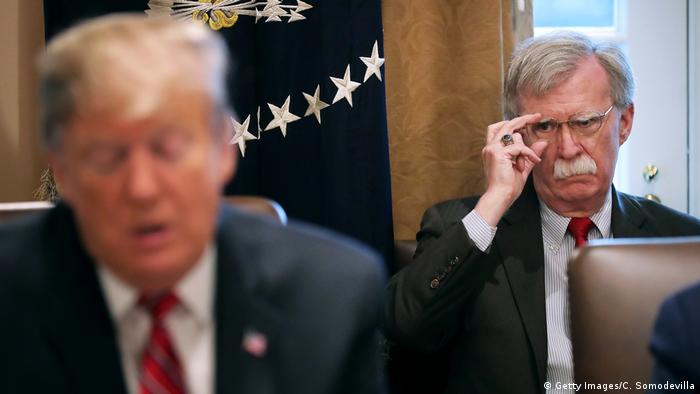 US national security adviser John Bolton warned Tehran on Sunday it should not "mistake US prudence and discretion for weakness."

"No one has granted them a hunting license in the Middle East," Bolton said of Iran ahead of a meeting with Israeli Prime Minister Benjamin Netanyahu. "Our military is rebuilt, new and ready to go."

US President Donald Trump claimed Friday that he rescinded the order for airstrikes on Iran after he was told 150 people would die in the attacks.

The United States launched an offensive cyber strike against Iranian missile control systems and a spy network on Thursday, amid escalating tensions between the two countries, US media said Saturday.

Bolton said sanctions against Iran were having an effect. "Sanctions are biting, and more added last night. Iran can never have nuclear weapons, not against the USA and not against the world," he said.

The US is expected to enact new sanctions against Iran on Monday.

Bolton is due to meet with security advisers from Israel and Russia in Jerusalem on Monday and Tuesday when he takes part in a security summit.

Tensions run high after Iran shoots down US drone

The US has confirmed that Iran's Revolutionary Guards shot down a maritime surveillance drone, but denied that it had been flying over Iranian airspace. US military officials called the incident an "unprovoked attack." (20.06.2019)