Why is North Korea 'cracking down' on 'foreign influence'?

In North Korea, a new "thought law" gives authorities the power to crack down on what they consider foreign haircuts, fashion and slang, while adults caught with CDs or USBs from abroad are being executed. 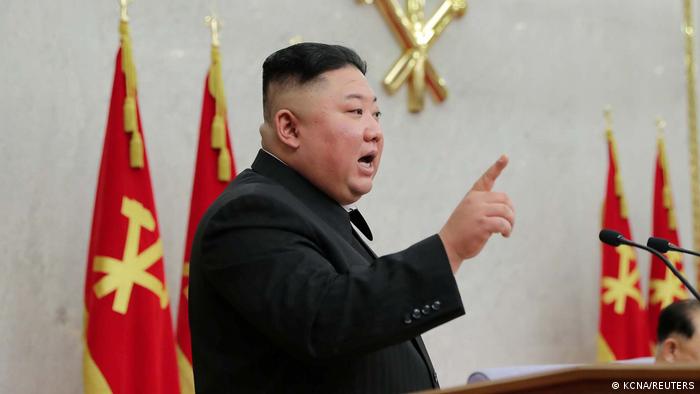 North Korea has ramped up efforts to stop citizens from seeing news, movies and other programs from abroad

Six children were recently dragged into a North Korean court in shackles and had clearly been harshly interrogated since their arrest, a source from within the country told NK News. The public trial for the three boys and four teenage girls in Nampo was perfunctory, with the state prosecutor detailing the reasons why they were before the court, which he insisted were "serious crimes."

The children were sentenced to five years at one of North Korea's notorious re-education camps.

The youths were fortunate, however, as the "crimes" for which they were convicted usually carry a punishment of a "life sentence of re-education through labor" or "execution."

The children were found guilty of watching South Korean films and television series over the past year and sharing them with classmates, reported NK News, which employs a network of contacts within the North to obtain news for one of the most respected dissident media outlets.

Over the last three years, the North Korean government has dramatically ramped up efforts to stop its citizens from seeing news, movies and other programs from beyond the borders of the isolated state.

Police have been detaining anyone deemed to have a haircut influenced by South Korean actors; who wears clothes in a way that is considered foreign, or who uses slang or everyday terms more common south of the Demilitarized Zone that divides the Korean Peninsula.

Acting on tip-offs, secret police conduct raids on homes where people are suspected of having watched programs on DVDs or USBs that have been smuggled into the country from China or sent over the border attached to balloons released in the South by defectors and human rights activists.

The force of the crackdown reveals that the regime of Kim Jong Un is genuinely concerned that younger generations of North Koreans are being influenced by events beyond the nation's borders. Armed with information and proof of their leaders' lies, the thinking goes, resentment and resistance might gradually grow among young people until North Korea suffers an internal rupture similar to the revolution that toppled Romanian dictator Nicolae Ceausescu in December 1989.

Fear of outside influences

"Kim and the upper echelons of the North Korean regime are very afraid of messages and information from outside getting into the country and influencing the way that people think," said Toshimitsu Shigemura, a professor at Tokyo's Waseda University and the author of a number of books on the Kim dynasty.

"They fear that young people will turn their backs on North Korean culture — which essentially means devotion to the Kim dynasty — and their political system, which could very easily be fatal," he told DW.

"They are cracking down hard on anyone they catch because they know that if the military is 'infected' with outside ideas and that spreads to the party, then the whole thing could come down," he added.

Rah Jong-yil, a former diplomat and head of the South Korean intelligence department charged with monitoring North Korea, pointed out that Pyongyang has managed to stave off intense geopolitical, military and economic pressures over the last half-century.

They include ongoing international sanctions imposed over its nuclear weapons and missile programs.

It would therefore be "deeply ironic" if the regime was finally brought to its knees by smuggled South Korean soap operas, he stressed.

"In a totalitarian state like North Korea, something as simple as this is a very serious threat to the regime's survival," Rah said. "And no matter what their secret police do, I think it will be virtually impossible to put the genie back in the bottle now; too many people in North Korea have been able to glimpse what life is like in the rest of the world."

Rah said there are clear parallels between what is happening today in North Korea and the collapse of the Soviet Union.

He said the signs of the collapse of communism can be traced back to the 1950s, and a cultural exchange program that saw the United States and the Soviet Union hold exhibits in each other's countries to showcase their greatest achievements.

While the Soviets displayed a model of the Sputnik satellite, the US displayed a fully fitted kitchen from a middle-class home. The response among residents of Moscow was "incredible," Rah said, with a kitchen turning out to be one of the most powerful weapons in the propaganda war between the two superpowers.

Foreign television programs will have the same impact on North Korea, he predicted.

"They are trying very hard to suppress external influences, but the technology has gotten to the point that it is easy to smuggle it into the country and then hide it," he said. "But the fact that they are so worried and are passing such powerful new laws is telling. It shows how serious the threat is."

In March, the official Rodong Sinmun newspaper printed a series of articles condemning the "degenerate" way in which many North Koreans now dress, speak and wear makeup.

"The use of dishonorable language harms the harmony and unity of the communists and has a bad influence on society," the paper declared. Protecting the nation's culture "is a matter of whether we will be able to protect our national identity from an invasion by all kinds of unhealthy and degenerate ideologies and lifestyles."

And if the enticing carrot is not enough to force the North Korean people to submit to Kim's demands, then the stick is also increasingly being employed.

In May, the wife, son and daughter of a man only identified by his family name, Lee, were forced to stand in the front row as he was executed by a firing squad in Wonsan after being found guilty of selling CDs and USBs containing South Korean films, dramas and music videos.

Lee's surviving family collapsed as the sentence was carried out, NK News reported, before they were picked up and forced into a vehicle to be transported to a camp for political prisoners for the crime of not reporting him.