Coronavirus absentees took their toll as RB Leipzig's disappointing season continued with defeat to Leverkusen in an empty stadium. Diaby and Wirtz excelled for the visitors, Szoboszlai missed a penalty for the hosts. 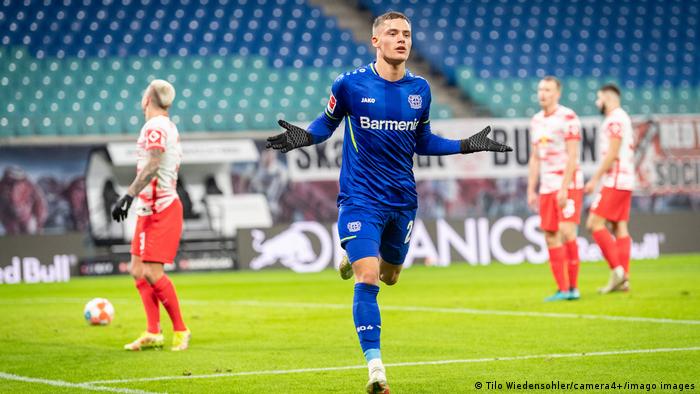 Ghost games returned to the Bundesliga on Sunday on a haunting evening for RB Leipzig, who were deservedly beaten 3-1 by Bayer Leverkusen.

All were unavailable for the game, which took place in an empty stadium after local authorities in the eastern state of Saxonyincreased restrictions in response to sky-rocketing coronavirus cases.

The seven-day incidence rate per 100,000 people in Saxony was over 1,200 this weekend, over double the national average of 438. Saxony also has the lowest vaccination rate in Germany at just 58%, compared to 68.3% nationally.

"We can never get used to playing without fans," RB Leipzig striker Andre Silva told DAZN. "Football is about having fans and support, not about hearing our own voices in our own stadium."

Wirtz and Diaby strike for Leverkusen

In hindsight, home fans may have been glad they stayed at home as their team were routinely taken apart on the counter-attack by a highly efficient Bayer Leverkusen side.

Frenchman Moussa Diaby had already had a goal narrowly ruled out for offside by the time German starlet Florian Wirtz did give Leverkusen the lead with his fifth goal of the season. Diaby himself got on the scoresheet not long after, demonstrating a delicate first touch before a solid finish.

Leipzig pulled a goal back through Silva in the second half, but Leverkusen immediately restored their two-goal cushion when Jeremie Frimpong's deflected effort looped in. Dominik Szoboszlai's missed penalty summed up the hosts' evening, as Leverkusen went third in the table.

"Bayer Leverkusen played well, they got in quickly behind our lines and caused us lots of problems," said RB assistant coach Achim Beierlorzer, standing in for Marsch. "The plan was to win the battles in the transitional moments and we didn't do that, so we deserved to lose." 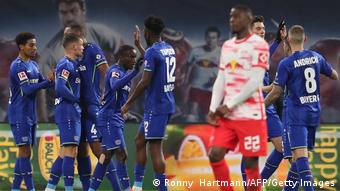 Frustration for RB, joy for Leverkusen

Frustration in Leipzig on and off the pitch

With impressive recent results against Borussia Dortmund (2-1), Club Bruges (5-0) and Paris Saint-Germain (2-2) balanced out by less impressive performances against Hoffenheim (0-2), Eintracht Frankfurt (1-1) and Freiburg (1-1), not to mention an early exit from the Champions League, RB Leipzig are consistently inconsistent and stranded in eighth.

"If I had the answer, I'd act on it, and if you have the answer, please tell me," said Silva when asked why that was. "Even in this game, despite the defeat, we showed we are capable of having the ball and creating chances."

Under the current pandemic restrictions, RB Leipzig will play at least two more home games behind closed doors before the end of the year, against Manchester City in their final Champions League group game and Borussia Mönchengladbach in the Bundesliga.

"We understand that everything must be done to stop the further increase of corona infections," the club said in a statement last week, expressing anger at the situation.

"But what we do not understand is why the government of Saxony allowed this situation to come about in the first place.

"The highest infection rate of all federal states, combined with the lowest vaccination rate, is proof that politicians in Saxony have not yet managed to implement sound concepts to effectively control the pandemic."