Ahead of this weekend's Super Bowl, the NFL has announced that the cities of Munich and Frankfurt will host two regular season games each over the next four years. The move comes 15 years after the end of the NFL Europe. 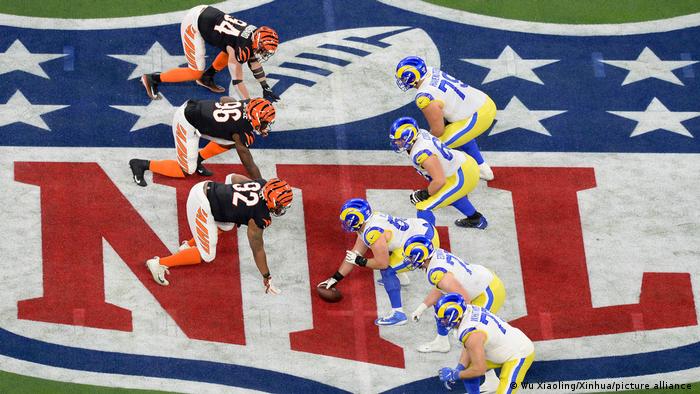 For American football fans in Europe getting a kick out of spectacular tackles, touchdowns and tailgating, watching a live game in the US or London has been an expensive exercise. Ticket costs alone can reach into the thousands, let alone flights and accommodation.

But good news arrived on Wednesday, as the National Football League (NFL) announced that it will hold its first-ever regular season games on German soil in Munich and Frankfurt over the next four years.

The much-anticipated announcement came four days before the Super Bowl, the biggest single sporting event in the world, and 15 years after the last NFL Europe game took place in Germany.

With its large and growing NFL fan base, as well as being one of the world's biggest economies, Germany is a key market for the sport's global expansion plans. NFL Germany managing director Alexander Steinforth told DW that fans could "expect an all-American experience," with year-round activities such as team tours, fan fests and watch parties planned.

"You can expect people from the UK, Spain and elsewhere to travel there for the games," Uhrich said. "This means additional income opportunities, international awareness and other benefits, all without much of an investment."

With some $15 billion in revenue in 2019 — close to three times more than the UK's Premier League brought in — the 32-team National Football League is the highest-grossing sports league in the world. According to Forbes, 11 of the 25 most valuable sports teams worldwide are NFL franchises.

Uhrich said the trend of highly professional and commercialized leagues' expanding to foreign markets started about two decades ago. "There's a natural saturation in their domestic markets, so at some point, the only way to gain a large number of new fans and substantially increase revenues is by internationalizing your brand."

A growing number of NFL players with ties to Germany have helped in this regard. In the past season, at least six players with German roots had a contract with an NFL team, among them New England Patriots fullback Jakob Johnson, who was born in Stuttgart.

The NFL is not without its own controversies, however. Former quarterback Colin Kaepernick's kneeling protest and the subsequent collusion lawsuit is a black mark against the organisation. While the adverse effects of the collision sport on players' health, such as links to neurodegenerative disorders due to repeated head trauma, led to a $1 billion settlement.

77 years of American football in Germany

For the first three decades after World War II, American football was played exclusively by GIs stationed in Germany. In 1976, a series of games between US college teams gave thousands of Germans a first glimpse of the US sport. A year later, the first American football club — the Frankfurter Löwen — was founded before others followed and the first regular competition formed in 1979.

The NFL played the first of five preseason games in Berlin's Olympiastadion in 1990 and even kick-started a global league a year later, rebranding it to NFL Europe in 1995 with six European teams. The five teams in Germany helped popularize the sport, partly because they stuck around longer and were more successful than the four non-German NFL Europe teams. 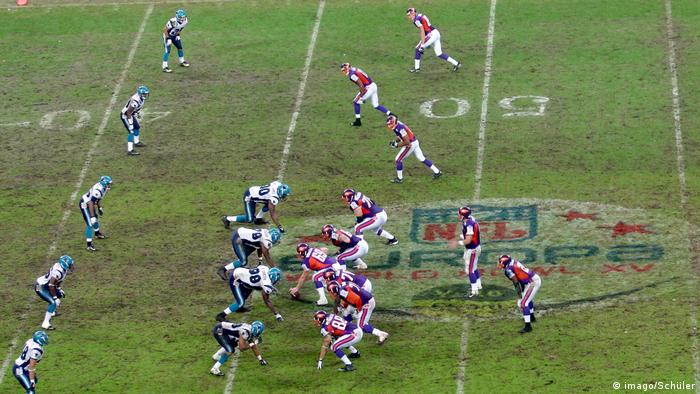 Nevertheless, the NFL shut down its loss-generating European cousin in 2007, the same year it staged its first regular season game at London's Wembley Stadium. According to Steinforth, up to 15% of people attending the hitherto 30 games came over from Germany.

Today, there are 500 registered teams with more than 70,000 members in Germany, according to the German Olympic Sports Confederation. The annual championship game, the German Bowl, attracted more than 20,000 fans in 2019. A new professional European League of Football, a kind of NFL Europe 2.0 launched last year, expanded to a dozen teams this season, including two in Austria and one in Turkey.

Elena Kassel, 28, told DW that she fell in love with the NFL and American culture when she attended games while working as an au pair in Washington, DC. She has been hooked ever since. 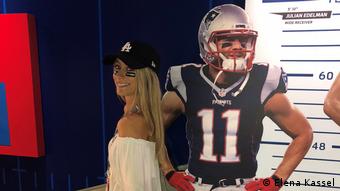 "I like the NFL partly because of all the social activities around the games like tailgating," the avid Green Bay Packers fan said. "American football is also a really strategic sport, with unique team traditions like the Lambeau Leap."

Still, the number of people staying up late to watch the Super Bowl has been climbing steadily: Viewership quadrupled from 580,000 in 1999, the year the annual spectacle was first broadcast on German free TV, to an impressive 2.23 million last year. 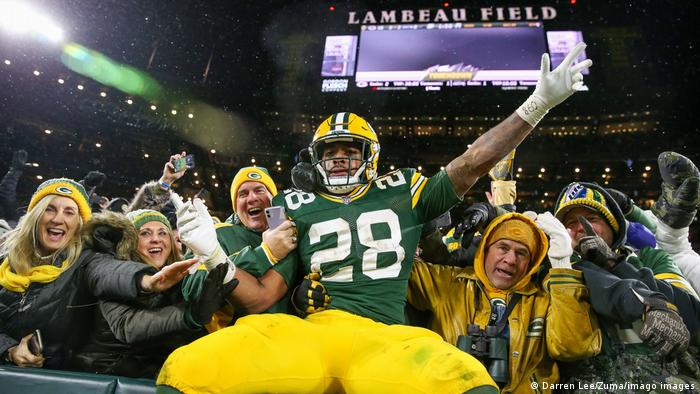 A major driver behind this increase has been the popularity of homegrown TV personalities such as two-time Super Bowl champion Sebastian Vollmer and on-screen social media guru Icke Dommisch. The crew of the "ranNFL" show, now in its 10th year, has found a way to cater to seasoned supporters and newbies alike by engaging viewers and explaining the rules in an often cheeky way.

To adapt or to stay authentic

Steinforth said the NFL would try to emulate some marketing strategies that it used during the 2007 London series. One such gimmick was using the Union Jack in merchandising and on the pitch. 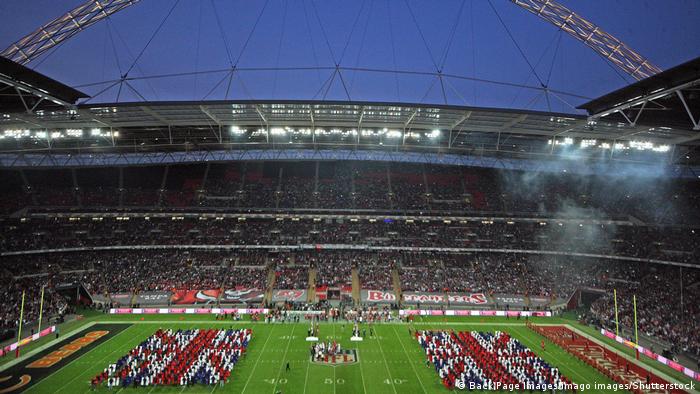 The Union Jack, seen here created on the Wembley pitch before an NFL regular season match in 2011

"I expect Germans to want the stars and stripes, the original character of the NFL," Uhrich said. He recommends opening stores in Germany and offering merchandise in German sizes.

How much will the NFL grow in Germany?

Given the steadily growing interest in American football among Germans and the NFL's presence over the past three decades, it's not a question of if the NFL will further grow its fan base through the Munich and Frankfurt games, but by how much. 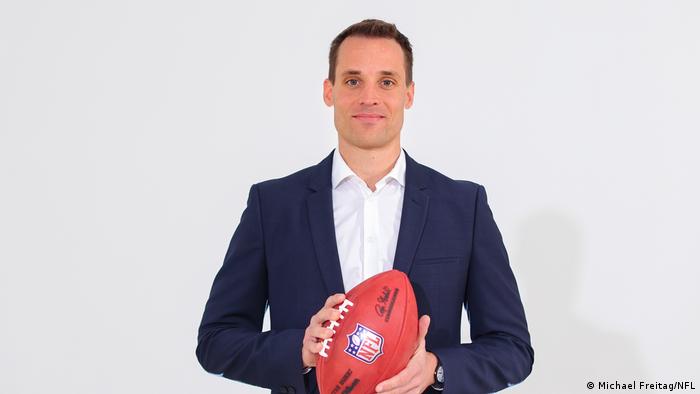 "Depending on how the first four games go, the plan is to turn those four years on the ground into many more," Steinforth said.

Sports marketing expert Uhrich, meanwhile, doesn't expect too much growth from the NFL in Germany in the short and medium term.

"I can see the NFL gaining a bit more market share, but the German sports market is quite traditional and saturated," Uhrich said.

"There's a huge dominance of soccer, which I don't expect to vanish anytime soon," he added. "Plus, many other team sports like handball, hockey or basketball have been trying to become more attractive for quite a while, and they only partly succeeded."

Washington's NFL team will take the field on Sunday for the first time since dropping its controversial name. Though the rebranding was a historic win for American Indians, the debate over team names remains unsettled.

Germany Embraces the 'Other' Football

The NFL Europe last month made Germany the continental stronghold of the sport by adding a fifth team. The hope: that American football's surprising success here will keep the league around longer.

Mixed messages: Bundesliga boss 'not ruling out' playoffs or a Super Cup in Saudi Arabia

The new head of the German Football League, Donata Hopfen, has sent mixed messages about the future of football, insisting that it must remain 'the people's game', but not ruling out new commercial activities.

As the world prepares for Super Bowl 51, the NFL sets its sights on the world

Hundreds of millions around the world will tune in to watch Super Bowl 51 between the New England Patriots and the Atlanta Falcons, but the NFL is hoping to capture the world's attention for more than just one game.

Medical experts have demanded annual brain screenings for all footballers playing for first and second division clubs in Germany. They also recommend checking youth players, according to Bild newspaper.

American football in Europe shows NFL who is boss when it comes to women in the boardroom 02.06.2022

Tom Brady playing in Munich on November 13 is the headline for American football in Germany this year, but the general managers of the European League of Football (ELF) are changing the game for women in sports.

The legendary coach had guided the Oakland Raiders to a Super Bowl victory and pioneered a popular video game franchise.