NFL set for most popular season yet, and Germany leads European support

With four representatives in the NFL and a lasting impact from a now disbanded NFL Europe, Germany are Europe’s biggest American football fans. DW's Jonathan Harding tracks the growth of the gridiron in Germany. 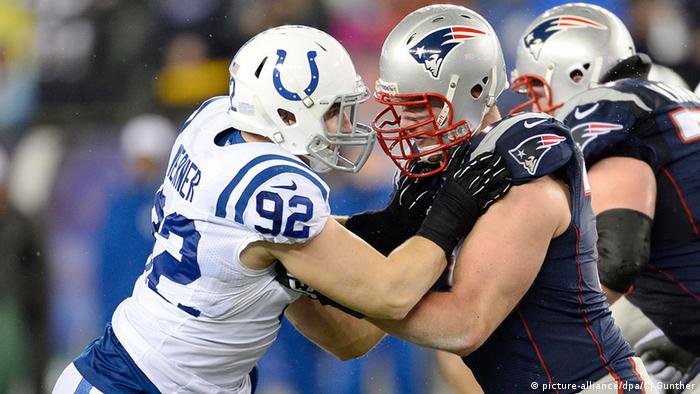 The most recent Super Bowl (number 48) was watched by approximately 82,500 people in the MetLife Stadium in New Jersey, while 111.5 million Americans tuned in from the comfort of their sofas. It was the most-watched event in US television history, beating the previous record set by none other than the previous Super Bowl.

Whisper it quietly, but American football is becoming trendy beyond the borders of its fame. Long has the Super Bowl been a reason to host late-night parties and purchase quirky logo-related merchandise.

Now though, along with knowing the latest death on Game of Thrones, knowing who beat the Dallas Cowboys last weekend is threatening to become cool. Global interest in the National Football League (NFL) is beginning to extend beyond the sport's grand February finale.

This week that interest is set to peak all over again as NFL fans this side of the Atlantic finally welcomed in the 2014/15 season during the early hours of Friday morning. The current Super Bowl champions Seattle Seahawks dominated the Green Bay Packers 36-16. With the new season comes the undeniable fact that outside of US borders, that committed, often sleep-reducing support is starting to spread. America's Game, which begins en masse this weekend, looks set to enjoy its most popular season of international interest. 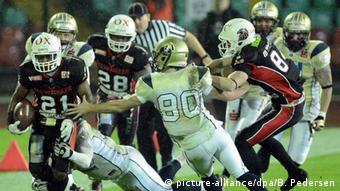 It's not been without its hiccups though. The game itself has struggled to gain traction because of two leading principles. Firstly, because the games last too long. An average encounter can last anywhere between three to four hours, with the Super Bowl effectively being an all-nighter for most Europeans. Part of the reason the games aren't over in 90 minutes - football has seemingly set the bar for just the right amount of sports-related entertainment - is because the game is stop-start.

This can be a stumbling block when it comes to attracting new fans, something that is made worse by the fact that advertising - very much a part of modern sport - has seized on these breaks to increase revenue. According to US broacasting company FOX, four million US dollars was the price for a 30 second advert in Super Bowl 48. The barrage of truck adverts is sadly simply part of the game.

The second principle that struggles to entice is the rule set. The confusion starts with the fact there are three parts to each team - an offense, a defense and a special teams. Add to that the numerous sets of on-screen changing and ticking numbers, flying red and yellow flags and referee explanations, and even the most modern of television viewers struggles to stay excited.

Despite these hurdles, that excitement seems to have the legs in Germany. Eric Böhm, online editor at Sport1 and a US sports expert, argues that four Germans are largely responsible for the increase in gridiron popularity in Germany. 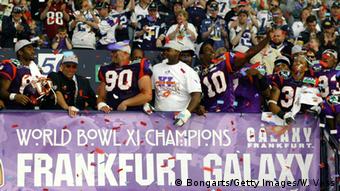 The World Bowl was the European version of the Super Bowl, but struggled to contain interest

"Having four players in the NFL makes a big difference - Vollmer and Werner in particular as they play important roles in the team. Edebali has been good in preseason and the Saints coaches are excited about him featuring in special teams. But it's Werner who is really Germany's ambassador (for the sport)," said Böhm to DW.

All have caused a stir back home, none more so than Werner.

Having impressed in a show game in the US, he received numerous college offers before deciding on Florida State. He wasted no time there and was elected in the first round of the 2013 draft by the Indianapolis Colts. This year, Werner has become an experienced, leading part of the Colts defense.

The birth of the pigskin in Germany

Having been briefly introduced to the shape of an American football after the Second World War, Germany all but forgot about the sport until the late 1970s. In 1979, the first domestic season was played in Germany, and in Dusseldorf Sportverein 04's stadium, 4,400 fans watched Frankfurt's Lions rout Dusseldorf's Panthers 38-0. The Lions went on to win the first German Bowl at the end of the year, and by 1981 Germany had an international team (beating Italy 12-6 in their first ever game). 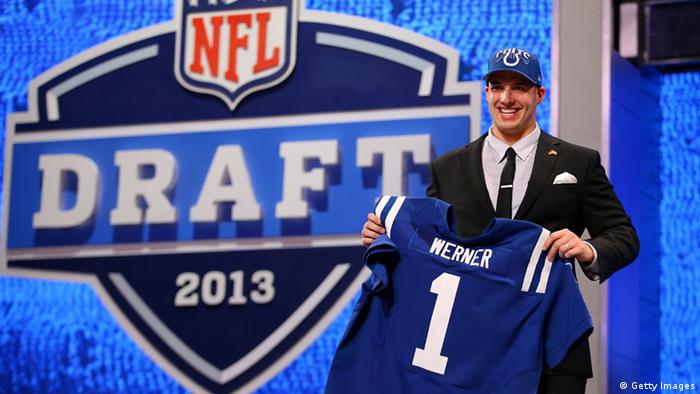 A year later the AFVD - Germany's American football association - was created. Just shy of a decade after that, America joined the party, launching NFL Europe. After a failed attempt in the 1970s, the US finally felt Europe was ready for American football and, using NFL Europe, tried to promote the game in a league system including European teams.

The glitz, glamour and glory of NFL support led to a boom of popularity during the mid 90s. After name changes, financial losses and decreasing interest from the US though, the league folded in 2007, with Germany the only winners. They had the most teams in the league (five), hosted seven World Bowls (the Super Bowl equivalent) and won the trophy the most often (Frankfurt Galaxy claimed four titles). In short, NFL Europe might as well have been called NFL Germany.

And so out of the seeds of this sporting love affair grew a fan base. NFL Europe may have fallen by the wayside, but the German Football League (GFL) was born - hauling in 360,000 fans in the 2000 season - and with it an informed and sustainable coaching staff. 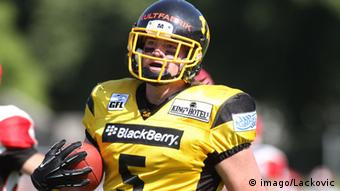 Garrett Andrews, formerly of the Munich Cowboys, is one of many US college players who moved to Europe to play

Garrett Andrews, wide receiver for the Kiel Baltic Hurricanes, is one of the leading players in the GFL and, as an American who made the leap across the Atlantic after leaving Middle Tennessee State University, Andrews has experienced the growth first hand.

"I'm starting to see the NFL becoming more and more popular overseas and it's very exciting! Whether it's a person wearing a hat or just a shirt, it's still cool. I know that NFL Europe wasn't as successful as it could have been, but I'm positive that if they brought it back it would be for good," said Andrews to DW.

For all of the aforementioned hurdles, the sport's "big hits, long runs and spectacular catches" have sparked intrigue. According to Andrews, it's the part of the game "people love so much!"

"Slowly but surely, people are enjoying the game more and more, which is helping the growth of the GFL as well," added the wide receiver.

The GFL remains Europe's best American football league and gives players like Andrews the chance to "play the game they love" and give "guys in Germany a chance to face better talent and get a comparison to what's its like to play in the US."

Andrews believes some of his German teammates "could easily start" for his college team back home - the step many dream of making.

Werner has already taken that step and is loving every minute. The 24-year-old linebacker recently offered two Facebook fans the chance for an all expenses paid trip to meet him and watch the Indianapolis Colts live. For Germany, he's the Dirk Nowitzki of American football. Even Spiegel have sat up and taken notice.

For all the marketing in the world, you can't beat poster boys. Germany drew a great deal from NFL Europe, but without Werner and co. that interest would have likely stagnated.

Wembley Stadium in London, England has hosted three NFL regular season games since late 2007, but the country remains starless. Former Olympian Lawrence Okoye trained with the San Francisco 49ers and was involved this pre-season, but was cut from the final 53-man roster.

Hope turns to Manchester-born Menelik Watson, who was drafted by the Oakland Raiders in round two of the 2013 draft. The offensive lineman is set to become a starter this season.

An NFL spokesperson agreed that “a continued increase in interest from the German market” was down to the German players in the league, but added “engagement through proliferating digital platforms” has also been a factor. 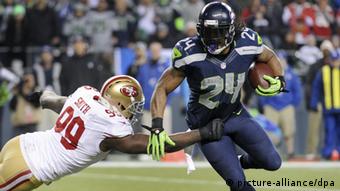 More European fans are tuning in for regular season and playoff games, not just the Super Bowl

The games at Wembley, social media platforms and licensed product sales have also contributed to Germany being one of the “strongest markets in the world from a media perspective.”

A “double digit year-on-year growth on digital platforms including nfl.com” proves the sport has successfully harnessed technology to promote its brand.

From Werner to games in Europe, fans now feel closer to the NFL, and that's got broadcasters and sponsors making moves. “Many of the league's international sponsors are now looking to expand their rights more broadly,” added the NFL spokesperson.

"The likes of AB InBev, Microsoft, Bose and Visa have recently signed deals with rights that include Germany, and we expect more partners to follow suit.”

In August 2013, German television channel Sport1 created a new channel solely for the broadcasting of American sports - Sport1 US. Until 2015, they have the rights to show seven games a week, including the playoffs, the Pro Bowl and the Super Bowl.