A new app will allow the average citizen to follow - and contribute to - tracking storks on their migratory journeys. Researchers say this latest generation of technology can boost conservation efforts for many species. 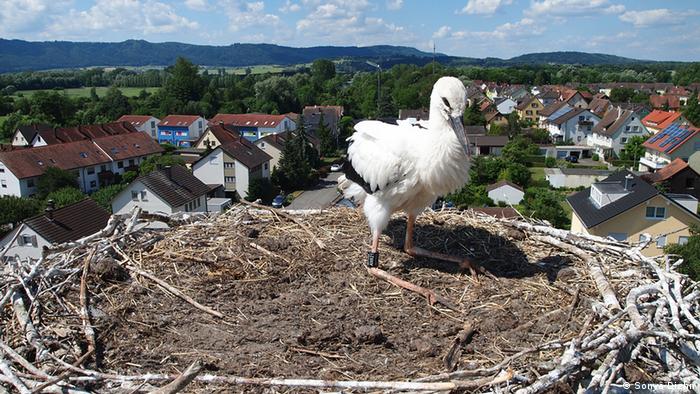 The villagers of Böhringen call Wolfgang Schäfle the "stork father." The retiree, who volunteers with the Max Planck Ornithological Institute, is keenly watched by a crowd of parents and small children as he's lifted in a fire truck ladder to a stork nest on the roof of a local church. He carefully reaches out and grabs one of the birds, placing it swiftly into a cardboard box for the journey to the ground.

"I'm the bad guy," Schäfle jokes in describing what the storks might think of him - he's tagged hundreds over the years and says some even recognize him. "Storks don't forget anything," he quips. 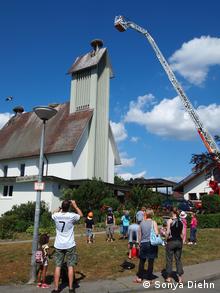 The fire service helps with the annual stork tracking

But this year's stork-tagging campaign in Germany includes something new: The Movebank app is giving ordinary people the chance to follow migratory species as they undertake their epic journeys across the globe.

The past few years have seen a revolution in animal tracking, thanks to development of micro-GPS (global positioning system) tags that use second-generation cellular networks and communicate with satellites to provide extremely detailed information about animals' movements.

The Max Planck Institute developed the app, which uses the GPS technology, as part of ongoing research that centers on the annual tagging of juvenile white storks in Germany. The institute has a brief window to access young storks that spend spring in Germany: They must be near-adult size but not yet have fledged, or flown from the nest for the first time. This occurs in mid-June, when the juvenile storks are about seven weeks old.

Schäfle delivers the storks to Wolfgang Fiedler, a post-doctoral researcher with the institute, who attaches the transponder to the juvenile animals with a heavy-duty band.

"We affix the logger that collects the GPS coordinates to the stork like a backpack," Fiedler says, adding that it disappears into the bird's plumage over time. For identification purposes, they also attach rings to the bird's legs. "The ring is the stork's passport," Fiedler said, explaining that the codes printed on them can be easily read with scopes in the field.

The "passport" and "backpack" will accompany a tagged stork on a migration that takes it from the heart of Europe to a whole other continent. 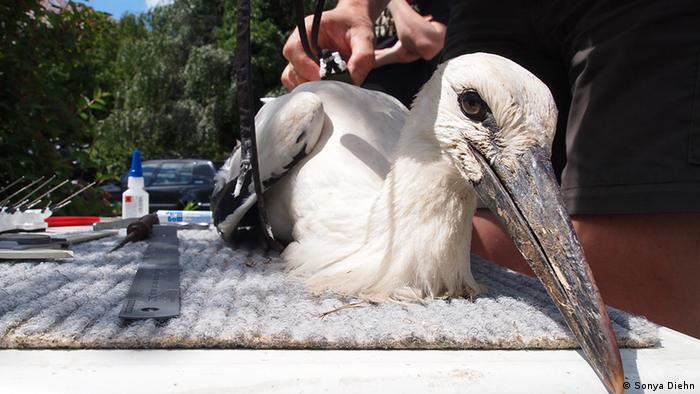 Starting in August, white storks in Europe will migrate to Africa. Although the shortest route runs directly south over the Mediterranean Sea, that would require them to spend a lot of energy flapping across the water.

So instead, the large birds soar on thermal updrafts along two different land routes: east across the Bosphorus, along the Levant, and up the Nile valley; or west through the Iberian Peninsula, across the Strait of Gibraltar and into Morocco.

Like the political divide that once split Germany into east and west, a migratory divide runs north to south through the country. But don't think Berlin Wall - it's actually more of a zone about 200 kilometers wide, Fiedler explained. "We even had a few cases where one of the breeding partners came via the western route and the other from the eastern," he said.

This is one factor that makes Germany particularly important for white stork research, Borja Heredia, head of the avian species team for the Convention on Migratory Species with the United Nations told DW.

"The white stork has played a very important role in the history of research and conservation of migratory birds," Heredia said. Its large size, relative robustness, and closeness to humans mean people have been tracking the species for more than a century.

This has built up a repository of data that has helped scientists understand threats to migratory avian species over time, Heredia explained. Use of satellite telemetry represents a huge "leap forward" in stork tracking methodology, he continued.

Fiedler explained that the logging unit sends a text message with the stork's GPS coordinates every five minutes or so - down to an accuracy of a few meters. "We can even tell in which field the stork was in Africa," he said. Such high-resolution data is only available through this new generation of technology.

The researchers are hoping the app will inspire birdwatchers to contribute their own observations to the tracking effort. "It's a kind of citizen science," he said. Loggers attached to storks can't capture all important information - the app allows anyone to upload details about the storks they've observed, such as their health status, feeding habits and social behavior, he said. 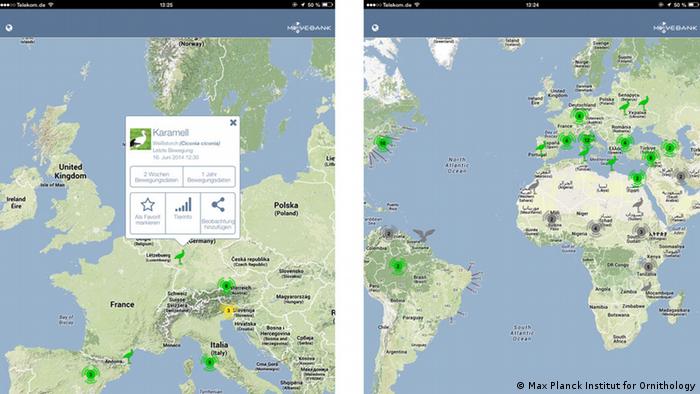 Heredia called it a significant effort. "It will multiply the amount of data," he said. This is especially important for conservation, he pointed out, as the white stork can act as an umbrella species. "If we are protecting white storks, we will be protecting these habitats and other species and biodiversity will benefit."

Although the International Union for Conservation of Nature (IUCN) defines the white stork as a "species of least concern," industrialization and draining of wetlands had pushed it toward the brink of extinction in Europe several decades ago.

Burgeoning European environmental awareness in the 1970s led to recovery efforts that made the white stork a conservation success story. This year there are more than 5,000 breeding pairs in Germany alone. 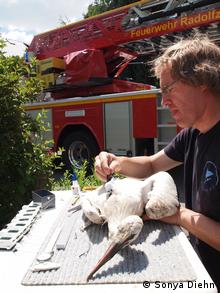 Fiedler works quickly to minimize disturbance to the storks

Although storks are relatively well-liked - in part because their return to Europe comes in spring, signaling the end of the bad times and symbolizing fertility - it's not all smooth sailing for the big bird. "A large threat is pesticides on the fields," said Andrea Flack, another post-doctoral researcher with the institute. Fewer pests mean less food for the predatory species.

Research indicates that the white stork's migration patterns have also been changing, including behavior like overwintering on the European continent or shorter migratory journeys. This may be due to climate change, although there are many possible reasons. Continued tracking will help "disentangle the different factors," Fiedler said.

While the storks are captured for tagging, "stork father" Schäfle takes the opportunity to clear the young birds' beaks of muck that builds up from feeding. "That's my personal service," he said.

When it comes to knowledge of bird populations, a large part of continental Europe is off the map. Now, ornithologists and enthusiasts in Russia are working to fill the information gap by creating a bird atlas. (26.05.2014)

Spain to build resort on its last wild beaches

There's one pristine beach near Spain's southern tip that's consistently been voted among Europe's top ten beaches, mainly because it's been spared from the country's rampant commercial development - until now. (13.05.2014)

ICARUS: Tracking animals from space could warn of epidemics and natural disasters 02.10.2020

Hiking, camping or a stroll along the beach might seem like the perfect way to enjoy the natural world. But these activities can have unintended consequences.