The leader of Thuringia in eastern Germany says people's right to assembly should be redefined to combat right-wing extremist music events. This comes after some 6,000 neo-Nazis attended a concert in the town of Themar. 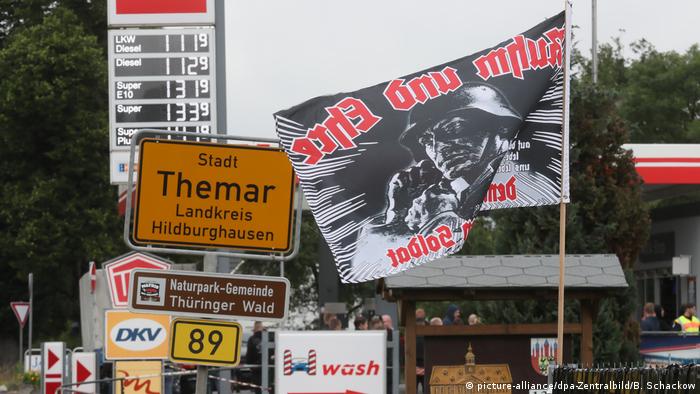 "Sad" and "helpless" - that was how Thuringia State Premier Bodo Ramelow of the Left Party described his emotions after right-wing radicals chanted "Sieg heil" at the "Rock against Being Swamped by Foreigners" event on Saturday. In an interview with the eastern German regional state television broadcaster MDR, Ramelow said that measures needed to be taken to prevent such concerts from enjoying the same protections and advantages as political protests.

"I find it intolerable that they staged a giant right-wing extremist rock festival under the guise of a demonstration and earned money for their political network while all the costs were passed on to taxpayers," Ramelow said.

The German constitution guarantees the right of people to assemble, and the state bears the costs of police presences to maintain order at political demonstrations. Ramelow suggests rewriting those rules to exclude concerts like the one in Themar, which he cast as a commercial event that had attracted 6,000 violent right-wing extremists from all over Europe. 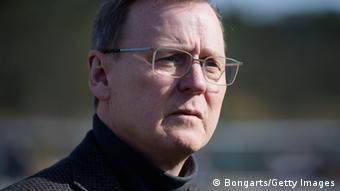 "I think we have to define the right to assembly precisely enough that in future local authorities, licensing offices and courts don't see things like this in terms of freedom of speech and treat a gigantic concert as a nice neighborhood demonstration," Ramelow said. "We calculate that it took in between 300,000 and 400,000 euros ($344,000-$458,000)."

Thuringia has the option of modifying Germany's federal Law of Assembly as states such as Berlin and Bavaria have done. And while it is unclear whether Ramelow's statements were an off-the-cuff response or a serious call to action, it is certain that Thuringia is the center of the right-wing extremist music scene in Germany.

It is no coincidence that Saturday's concert was staged in this part of the country. People in the formerly communist eastern part of Germany are generally more receptive to right-wing extremism than elsewhere. Henning Flad, project director of the Federal Working Group for the Church and Right-Wing Radicalism, says Thuringia has been a perennial "hot spot" for right-wing extremist music.

"It always had particularly active, ambitious structures of people who organized concerts like this," Flad told DW. "It has always been an infrastructural point of connection."

The organizer of Saturday's concert, Tommy Frenck, who owns an online clothing shop featuring neo-Nazi items and has the word "Aryan" tattooed around his neck, comes from Thuringia. The owner of the property where the festival was held, Bodo Dressel, the mayor of a neighboring town, was until recently a member of the right-wing populist Alternative for Germany (AfD), who was criticized from within his own party for being too extreme.

Flad says that there has been a small comeback in right-wing extremist music in the past two years, "which thanks to this well-attended concert has become more visible." Jan Raabe, perhaps Germany's leading expert on the radical right and music, says there are some 200 extreme right-wing bands and singer-songwriters active in the country. He puts the number of people in the scene, narrowly defined, at around 15,000.

"What we, of course, don't know is how many young people have this sort of music on MP3 players and other devices," Raabe told DW. 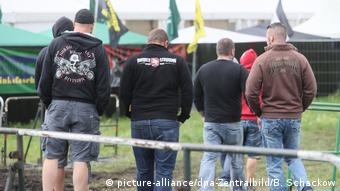 Thuringia is the center of Germany's right-wing radical music scene

Local authorities initially refused to grant permits for Saturday's event in Themar, but that refusal was overturned by a higher Thuringia authority. Organizers are planning another far-right event for July 29 with the title "Rock for Identity."

The mayor of Themar, Hubert Böse, organized a protest action with other local leaders against last Saturday's concert and says he'll do the same if the upcoming festival is allowed to go ahead.

"It would be terrible if we didn't come together in a peaceful counteroffensive," Böse told DW. "We don't want this sort of thing and are of the opinion that, in terms of content, it has nothing to do with Themar."

Böse said he couldn't say whether he supported Ramelow's ideas without knowing the details. But he added that his town, which has just over 3,000 residents, was too small to cope easily with large-scale right-wing extremist music festivals.

"In general, we should ask whether events of this size, which significantly exceed the number of inhabitants, should be considered examples of people assembling," Böse said. "We had 1,000 police officers here. In the end it all costs a lot of money."

To change the law - or better enforce it?

Video footage from the festival, which was shared on social media, shows a crowd shouting "Sieg Heil.

Critics have questioned why police officers didn't intervene and shut down the concert since expressions of support for National Socialism are forbidden in Germany.

The Central Council of Jews in Germany praised the community of Themar for "bravely" opposing the concert and said it agreed with Ramelow that a "radical right-wing music concert should not be classed as a political demonstration covered by the freedom to assemble."

But Ramelow's suggestion also attracted considerable criticism from detractors who argued that it would do nothing to combat the problem. Raabe, for instance, said he didn't see any "direct advantages" of changing laws on assembly for combating right-wing extremism and the associated music scene. Existing laws, he proposed, should be better enforced.

The residents of Themar now must wait to find out whether another event will be held in their town in two weeks time.