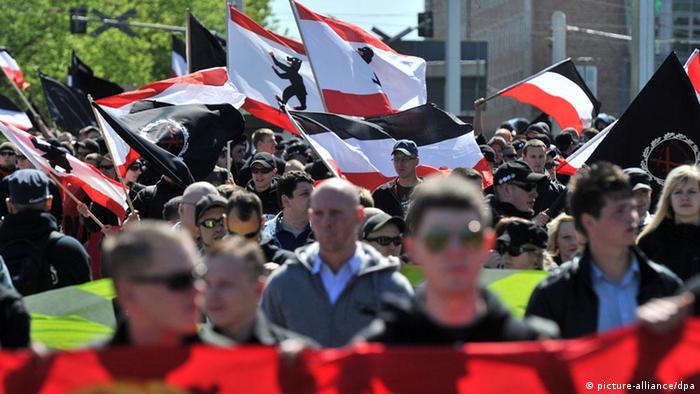 DW: Mr. Schedler, you are an expert on current forms of neo-Nazism, like the so-called autonomous nationalists, and you research how they create their image. What role does style play for young members of the far-right?

Jan Schedler: Its new style has made the far-right scene more attractive for young people in recent years. They've departed from the skinhead image of the 1980s and the proportion of far-right skinheads is diminishing. For young neo-Nazis, the combination of clothing, hair style and logos is very important in forming their own identity.

What characterizes their style?

Young right-wing extremists orient themselves according to what is trendy in the leftist scene. They wear modern street wear, like cargo pants, hoodies, caps and sneakers.

That's because the clothing style is closely tied to the music that's currently popular in the scene, which is a neo-Nazi form of hardcore that originated from punk. The music is known as NS-hardcore or NSCH (national socialist hardcore). NSHC incorporates a wide spectrum of bands that see themselves not just as musicians but also as political activists. Their lyrics are accordingly radical. 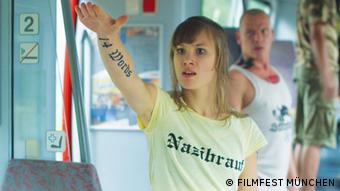 Inciting lyrics are forbidden in Germany. So how are these bands able to get away with it?

A number of trends can be observed at the moment. First of all, many professional bands that have been around for a long time are having their texts checked by lawyers who are familiar with the scene. As a result, the meaning behind the texts is clear to those who are involved in the scene, but the copyright holders can't be prosecuted.

We're also seeing the trend that bands try to cover up their members' identities and then make underground music that intentionally uses extremely inciting lyrics - like the band Landser. They were recently convicted not just for incitement and for disseminating extremist right-wing propaganda, but also for being a criminal organization. They are the exception, though.

Others, like the Weisse Wölfe (White Wolves), sang anti-Semitic lyrics with references to the national-socialist genocide against the Jews. But prosecutors weren't able to prove that they had actually been involved in producing the album, so they were acquitted of the incitement charges - a fatal signal [for other groups].

So the music doesn't just have an impact on young right-wing extremists' style, but also on their politics?

Yes, in the past few years, the music has grown in popularity and, for many youths, it serves as a gateway into the scene. They continually hear the texts and the propaganda they contain. Young people who already have a tendency toward racism quickly start dealing more intensively with the political intentions [behind the music].

There seem to be parallels between the extremist right- and left-wing scenes, at least in terms of fashion and music. Do both groups use symbols similarly?

Neo-Nazis like to take symbols from their political opponent and then modify them, like the logo used in the popular "Kein Bock auf Nazis" (No Interest in Nazis) campaign against right-wing extremism among youths. The neo-Nazis used the same graphic design, but with the text: "Kein Bock auf Israel."

They also take buttons from the punk scene. You have to look very closely to notice the far-right motives, with slogans like "Revolution since 1933." At a demonstration in Berlin and Dortmund, neo-Nazis used the Antifa symbol - black and red flags in a white circle - except that there was a white circle on the red flag. Even without a swastika, the association was clear - but legal.

Jan Schedler is a member of the faculty in the Social Science department of the Ruhr University Bochum.

David Wnendt's debut film, "Combat Girls," goes behind the scenes of right-wing extremist gangs in eastern Germany and hits a bit too close to home. Audiences are left both shocked and bewildered. (24.01.2012)

An accomplice of a neo-Nazi gang has confessed to providing the weapon used to kill nine people of immigrant background in Germany. The murders went undetected by authorities for a decade. (24.02.2012)

Families of the victims of neo-Nazi terror spoke of their grief in front of the German people on Thursday. Chancellor Merkel asked them for forgiveness, symbolized by a candle lit in "hope for a better future." (23.02.2012)