The Nebra sky disk was long thought to be the oldest known concrete depiction of the cosmos, but if the findings of archaeologists Rupert Gebhard and Rüdiger Krause turn out to be true, then that will no longer be the case.

The disc, found by treasure hunters in 1999 on a hill known as the Mittelberg near Nebra in Saxony-Anhalt, was included in the UNESCO Memory of the World Register in 2013. The article published by Gebhard and Kraus in the Archaelogical Information journal could change that listing.

Their meta-analysis, or assessment of the results of existing previous research on the disk, combined with a study of the history of the motif, led the researchers to come to the following conclusion: It is unlikely that the sky disc, as previously assumed, dates back to the early Bronze Age. They assert that it was rather produced in the Iron Age. Based on their findings, it would only be around 2,600 years old and therefore a millennium younger than previously assumed.

The archaeologists also claim that the other artifacts allegedly found with the Nebra disk, including two bronze swords, do not belong together. They therefore doubt the specified location of the archaeological find. 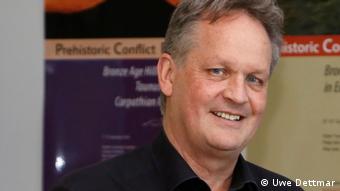 Rüdiger Krause: Previous metal analyses couldn't determine without doubt that the sky disk was found at the Mittelberg site

"The disc must be assessed as an individual find," Rüdiger Krause, who is also professor of European prehistory and early history at the University of Frankfurt, told DW. "It just does not have the background to have been found in a depot with the other accompanying items that ultimately served to date it. This can no longer be asserted based on strict scientific criteria." As an expert in studies on metal analyses, Krause was primarily responsible for this part of the assessment.

Both Krause and Gebhard, director of the Munich State Archaeological Collection and professor of prehistory at the University of Munich, did microscopic observations of the various finds of the artifacts several years ago. The items were deemed through previous observations to have been made of the same type of copper, but Krause and Gebhard have their doubts, especially because of the lead isotopes in the sky disc which do not match the ones in other pieces.

Dubious find: Where does the disc come from?

Another factor triggered the researchers' doubts: They consider the hole in the site where the disc was allegedly found next to the other objects to have been "too small," Krause said.

The find is known for its questionable context: The two treasure hunters who found the artifacts in 1999 were operating illegally. Their loot circulated on the black market for a few years before it was seized in 2002 during an illegal sale in Basel, Switzerland.

The original finders were traced, and they led authorities to their discovery site. The items are now part of the collection of the State Museum of Prehistory in Halle, in Saxony-Anhalt. The Nebra sky disk is an important cultural asset in Germany

A reevaluation of cultural history

Based on Gebhard's comparison of the history of imagery on items from the Iron Age, the disk would have been made between 800 and 50 BC. There were for instance similar depictions on the sword of the Celts of Allach from the 5th century BC. Rupert Gebhard classifies the depiction as one from the Iron Age

His colleague Krause also added that, as previous interpretations have suggested, it should not be viewed as a concrete astronomical depiction of the sky: "In our opinion, it is only a symbolic representation of individual stars."

According to the website of the German UNESCO Commission, the image on the disk contains "a complicated message — the exact comparison of the lunar and solar years of different lengths." It is still described there as an "astronomical instrument" that served to precisely determine cosmological events over the years.

However, the presentation of the item also indicates that written evidence of this technological skill only appeared 1,000 years later — which also corresponds to the period identified by Gebhard and Krause.

New finds, from Stonehenge to Jerusalem

In July 2020, David Nash and his team from the University of Brighton revealed that the UK's West Woods, 25 kilometers (15.5 miles) away from the site, was the most likely origin of the major part of the stones used to create Stonehenge.

Finds from excavations on Mount Zion in Jerusalem have also determined that the city in Old Testament times was smaller than previously believed.

If the Nebra Sky Disk loses its classification as the oldest concrete celestial representation, that title could go to a star clock in a grave's wall painting found in Thebes, Egypt, dating back to the year 1463 BC.

The artifacts reveal how Germany was at the center of major developments on the European continent.