The Bronze Age astronomical clock will move to London temporarily as part of an exhibition highlighting recent archaeological discoveries. Researchers uncovered the disc's original purpose in 2006. 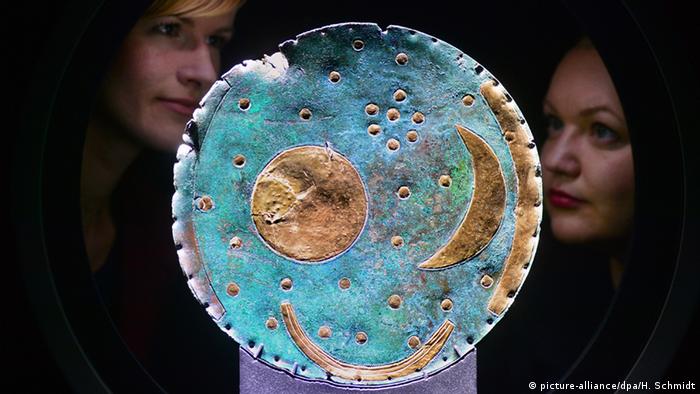 The State Museum of Prehistory in Halle in the eastern German state of Saxony-Anhalt will loan out the archaeological wonder to the British Museum in London for several months, the two museums agreed on Monday.

The Nebra Sky Disc dates back to the Bronze Age and is thought to be the world's oldest obvious depiction of the cosmos.

The loan will take place as part of a special exhibit, "The Nebra Sky Disc — New Horizons," highlighting discoveries made in the last 20 years. The exhibit will begin in Halle in November this year and feature artifacts from Saxony-Anhalt as well as objects on loan from the British Museum and other museums. It will move to London for its final phase in 2021.

The Nebra Sky Disc was discovered in 1999 by two convicted looters while treasure hunting in Saxony-Anhalt. It then changed hands several times before the authorities seized it and other Bronze Age objects in a raid in Switzerland in 2002. The disc has lived at the museum in Halle since 2008.

After years of speculation as to the disc's purpose, in 2006 research revealed evidence that suggests the disc was an astronomical clock used to harmonize the solar and lunar calendars.

A lunar year is 11 days shorter than a solar year. The disc would have helped determine when a 13th month should be added to the lunar calendar to keep it in line with the seasons.