Scientists have reexamined the skeleton of the prince, who died 3,846 years ago. They say injuries found on his bones point to the "oldest political assassination in history," probably by an "experienced warrior." 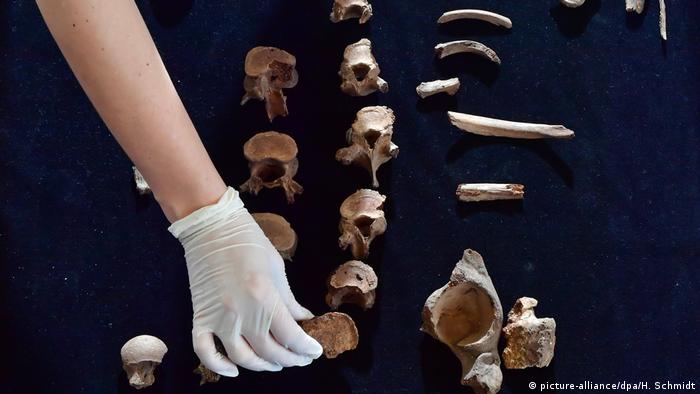 A group of archaeologists and forensic researchers in the eastern German city of Halle, Saxony-Anhalt, announced Tuesday that after reexamining the bones of the prince of Helmsdorf they have concluded that he was murdered. The attack, carried out 3,846 years ago, is now the world's oldest known political murder.

The forensic examination took place at the urging of Kai Michel, who co-authored a new book on the Nebra Sky Disc with Saxony-Anhalt State Archaeologist Harald Meller. The two suggest that the Bronze Age Unetice culture, which produced the disc depicting the cosmos, was the first high culture to evolve north of the Alps.

Speaking of the importance of the examination, Kai Michel says: "Ultimately we are dealing with the only known remains of someone directly linked to the Nebra Sky Disc. And as far as we can tell, we have now found evidence of the oldest political assassination in history."

The work of an experienced warrior

Although anthropologists inspecting the prince's bones in 2012 suspected signs of injury, they were unable to find conclusive evidence. But on Tuesday, Frank Ramsthaler, deputy director of the University of Saarland Institute for Forensic Medicine, said: "We have been able to verify three clear injuries to the bones. There were likely more injuries, but all three of those we confirmed would have been lethal. The murder weapon may have been a dagger, the blade of which would have to have been at least 15 centimeters (just under 6 inches) long."

Ramsthaler said the prince was likely stabbed by a powerful and experienced warrior who thrust his dagger through the prince's stomach and into his spine, as evidenced by a six millimeter wide and three millimeter deep wound in the eleventh thoracic vertebra. Ramsthaler says the intensity of the injury indicates that the prince would have been stabbed as he stood against the wall, or perhaps while lying on the floor. The forensic scientist says the stabbing would also have severed arteries, leading to certain death.

Archaeologist Meller says a second injury, which came from above and behind the collarbone, splitting the prince's left shoulder blade and likely seriously injuring veins and portions of the lungs, "suggests an experienced warrior," pointing out, "That's also where Roman gladiators would set their death blow."

Surprised by the attacker

Although scientists will never be able to tell which of the injuries came first, they say that an arm injury would suggest that the prince may have been surprised by the attacker and tried to defend himself.

Meller, speaking to the issue of who may have killed the prince, said: "It must have been a trusted person close to him. Perhaps a relative, friend or body guard," adding, "The ruler was unsuspecting and surprised by the attack. It could well be that he, like Julius Caesar in ancient Rome, was the victim of a conspiracy."

Despite the prince's murder, the Unetice culture survived its leaders death and went on to flourish, as evidenced by the quality of the Nebra Sky Disc, which was discovered in 1999. The disc was added to the UNESCO Memory of the World Register in 2013.

The prince of Helmsdorf was buried in the Leubinger mound discovered by Friedrich Klopfleisch in 1877 and dated around 1940 BC. It is regarded as one of the richest Early Bronze Age graves in the whole of Western Europe.

Archaeologist Harald Meller announced that the full findings of research undertaken on the skeleton will be published in the first half of 2019.