German archeological treasures from tomb of Celtic princess on show

The princess' jewelry had been hidden for thousands of years, but now they're highlights of an ambitious exhibition in Berlin's Gropius Bau museum. Here's a look back at the milestone discovery from 2010. 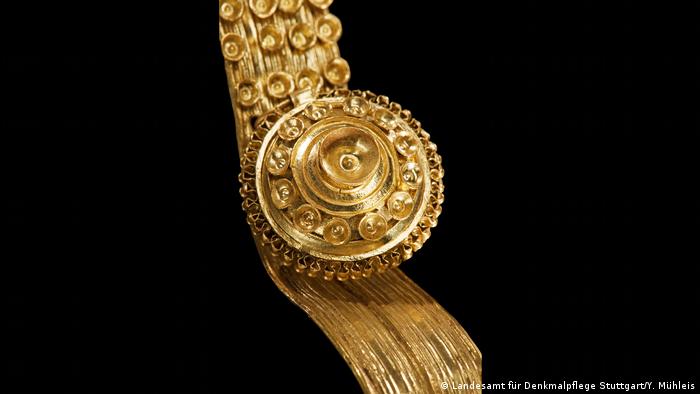 "Restless Times. Archaeology in Germany," the upcoming major exhibition at Berlin's Gropius Bau, features the most spectacular finds uncovered from German archaeological sites over the past 20 years.

Some particularly heralded items on display are the finely worked gold and amber jewelry found near the skeleton of a Celtic princess. These had been kept hidden for over 2,600 years in her four-by-five-meter subterranean tomb near the prehistoric hill of Heuneberg in southern Germany, right by the Danube River.

After discovering the chamber, archaeologists determined that the best way to explore its contents would be to remove the entire room from the earth as a block and send it to a research facility.

The entire 80-ton chamber was lifted by cranes, becoming the largest archaeological block recovered in Germany to this day.

The results of the following years of research revealed so many artifacts and information about Celtic culture that experts described it as an "archaeological milestone."

The oak floor of the room and organic materials were unusually well preserved by flowing water. The tomb could therefore be exactly dated to the year 583 B.C.

The jewelry worn by the Celtic noblewoman came from Italy and even further abroad, demonstrating that Heuneburg, one of the most important Celtic settlements in Germany, was a vital trading center during the period between 620 and 480 BC.

What came first, the bread or the beer? Archaeologists who found a 13,000-year-old alcohol-production site may have an answer. But the ancient brew made there bears little resemblance to today's tall cold ones. (13.09.2018)

Egypt says archaeologists have unearthed one of the oldest villages ever found in the Nile Delta. The find indicates that humans were living in the area as early as 5,000 B.C. — well before Giza's pyramids were built. (02.09.2018)

The sketch was drawn on a tiny piece of rock some 73,000 years ago by hunter-gatherers in South Africa. The abstract design has a vague resemblance to a popular symbol of the internet age — the hashtag. (13.09.2018)