Egypt says archaeologists have unearthed one of the oldest villages ever found in the Nile Delta. The find indicates that humans were living in the area as early as 5,000 B.C. — well before Giza's pyramids were built. 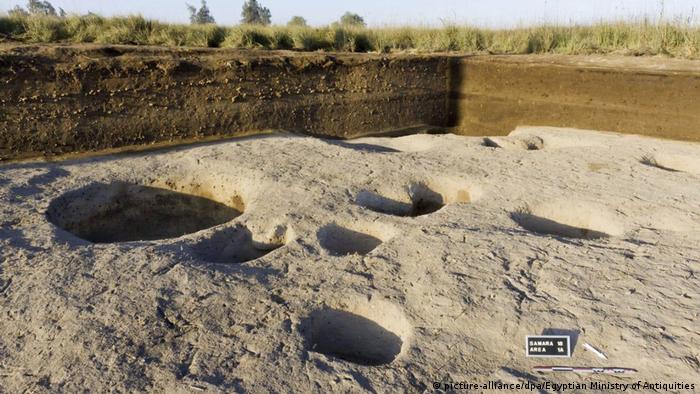 Archaeologists working in Egypt's Nile Delta have discovered the remains of an ancient village that predated the era of the pharaohs, the country's Antiquities Ministry said Sunday.

The Neolithic hamlet was uncovered in the Tell el-Samara area, about 140 kilometers (87 miles) north of the capital, Cairo.

Frederic Gio, who led the dig, said his team found several silos containing animal bones, vegetative remains, pottery and food. The remnants suggest stable societies lived at the site as far back as 5,000 B.C. — some 2,500 years before the famed pyramids were built at Giza.

"Analyzing the biological material that has been discovered will present us with a clearer view of the first communities that settled in the Delta and the origins of agriculture and farming in Egypt," said Nadia Khedr, a ministry official responsible for Egyptian, Greek and Roman antiquities on the Mediterranean.

The find is the latest in a series of ancient discoveries announced by Egypt's government in recent months.

In February, a team of German and Egyptian experts uncovered an ancient cemetery near the southern city of Minya that contained more than 1,000 statues and eight tombs. Other significant finds include a mummification workshop near Giza's Saqqara necropolis and a 4,400-year-old tomb near the pyramids.

The number of visitors to Egypt has plummeted amid the unrest following the 2011 uprising against dictator Hosni Mubarak. The government hopes the publicity surrounding its ancient finds will help boost the struggling tourism industry.

A major museum under construction near the Giza pyramids is expected to open, at least partially, later this year. It will house a large number of ancient Egyptian artefacts.