Experts from Egypt and Germany have found an ancient necropolis, containing more than 1,000 statues and eight tombs. It's the fourth major discovery in a year, and could eventually prove a much-needed boon to tourism. 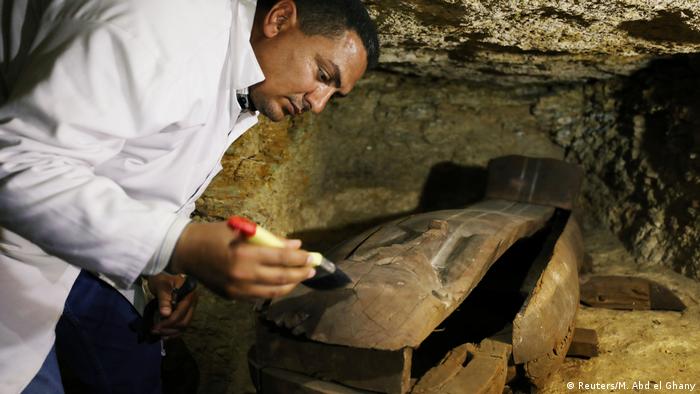 After several months of excavation work, Egypt's antiquities ministry said on Saturday that an ancient cemetery had been discovered near the city of Minya, south of Cairo.

The large necropolis is located 4 kilometers (2.5 miles) north of the Tuna al-Gabal area, a vast archaeological site on the edge of the western desert. The area is known to house ancient catacombs from the Pharaonic Late Period and the Ptolemaic dynasty.

The minister told reporters the uncovering was the beginning of what he thought would be a much bigger discovery.

He hailed the initial find as "important, as it explains several aspects of the life of the ancient Egyptians," adding that excavators would need at least five years to complete the project.

Mostafa Waziri, head of the archaeological mission, said eight tombs have been uncovered so far and he expects more will be discovered soon.

Four well-preserved alabaster canopic jars were singled out for mention, inscribed with hieroglyphics and designed to hold the mummified internal organs of their owner, who would have been a high priest of the ancient Egyptian deity Thoth, the god of the moon and wisdom.

The priest's mummy was also found decorated with blue and red beads and bronze gilded sheets.

Archaeologists from Egypt and missions from the German cities of Munich and Hildesheim took part in the excavation. 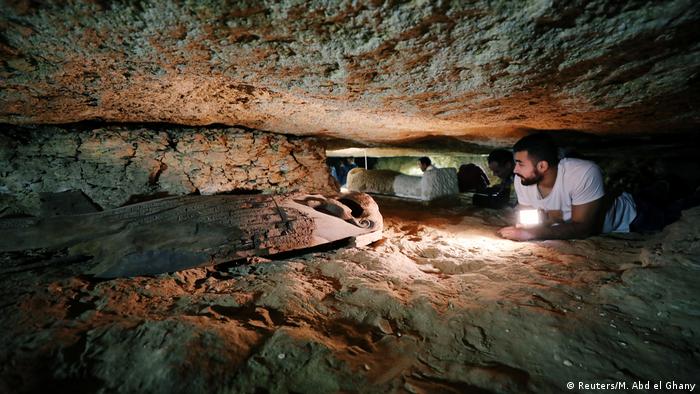 Work began in the area late last year as part of a project to find the remainder of the cemetery of Upper Egypt's 15th nome (district) during ancient times. Ancient Egypt was divided into Lower, Middle and Upper Egypt, which each region having around 20 nomes.

Several other ancient discoveries have been made across Egypt in recent months, including a separate necropolis in the area of Tuna al-Gabal, which holds at least 17 mummies.

Earlier this month, a 4,400-year-old tomb was discovered near the famed Giza Pyramids south of Cairo. The tomb is that of a female priest called Hetpet from the pharaonic Fifth Dynasty.

Late last year, several tombs were uncovered in the southern city of Luxor, on the west bank of the Nile, in a cemetery for noblemen and top officials

A major museum, under construction near the Pyramids, will house a large number of ancient Egyptian artefacts. It is due to be partially opened later this year.

The discoveries could help turn around Egypt's battered tourism image following the political turmoil that followed the 2011 uprising against long-time dictator Hosni Mubarak.

Attacks by Islamist militants against its Coptic Christian community, conflict in the troubled Sinai peninsula, the 2015 downing of a Russian passenger jet after take off from Egypt's Sharm el-Sheikh, and terror attacks on Egypt's famous Red Sea resorts in 2015 and 2016, have put off many visitors from travelling to the country.

Although tourism rebounded sharply last year, the 8.3 million arrivals were still almost half the number who visited Egypt in 2010, before the uprising.