Although ancient Egypt and China never communicated with each other, they had many things in common. The exhibition "China and Egypt. Cradles of the World" shows inventions made in both countries a long time ago.

Plagiarism and industrial espionage may in some cases explain why a particular invention turns up far away from where it was originally invented. But what about such cases when these possible explanations have been ruled out and two inventors incidentally develop the same idea?

Take, for example, horse snaffles - a longish mouth piece made of bronze that is kept flexible by two interlocking rings in the middle enabling the rider to steer the horse to the right or left. Two such snaffles can be admired in the special exhibition "China and Egypt. Cradles of the World" that runs in Berlin's Neues Museum from July 6 to December 3, 2017. One of them, dated to 1,200 BC, was found in Egypt, and the other one, dated a bit later, in China. The possibility that the Chinese copied the invention from the Egyptians has been ruled out as these two ancient civilizations had no contact with each other at this stage. 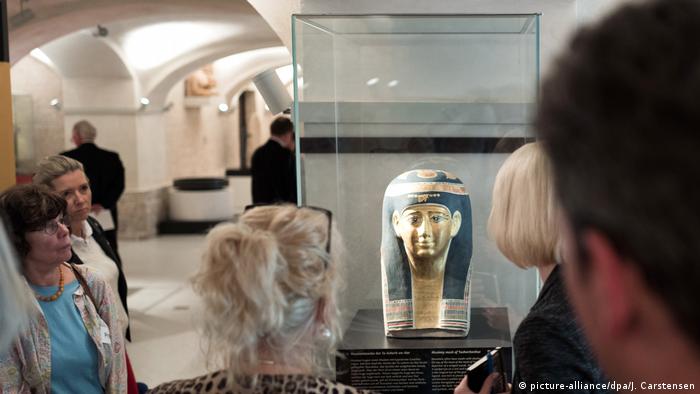 The partly golden mummy mask of Ta-Scherit-en-Hor (323-30 BC) in the exhibition "China and Egypt. Cradles of the World"

The same solutions to the same problems

Back then, traveling merchants and couriers were capable of bridging enormous distances of up to 3,000 kilometers. But they could never have overcome the 8,000-kilometer distance between China and Egypt. And yet, these two civilizations seen as the world's earliest ones, developed numerous similar inventions, institutions and traditions - not only concerning instruments of daily life, but also religious rites like the death cult and other religious concepts.

"When people feel an urge for having a stable roof over their heads, or cloth that embellish and protect them, they are quite likely to come up with similar solutions," explains Friederike Seyfried who, together with curator Mariana Jung, is in charge of the exhibition. Sooner or later, almost every culture has invented the needle after experimenting with fish bones, pin feathers or little bones. And in the same way, people came up with similar answers to abstract questions about God and the hereafter. 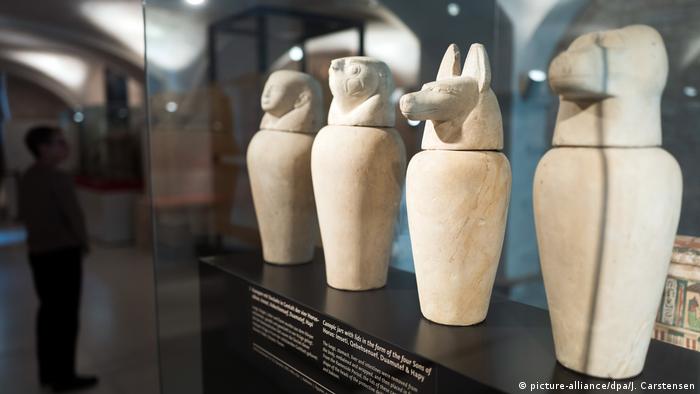 From Shanghai to Berlin

Friederike Seyfried is the director of the Egyptian Museum and the papyrus collection. Roughly half of the 250 exhibits of the current Berlin exhibition originate from there. The other half comes from loans of the Shanghai Museum with whom Berlin's state museums are cooperating. Both museums came up with the idea to initiate a common exhibition including items from 4,500 BC until 300 AD in the Greek-Roman era.

After all, it's an important social anthropological question that makes this exhibition so interesting. How do human civilizations develop? And what are man's solutions to particular problems?

The exhibits are not presented chronologically, but in terms of five big topics: daily life, writing, power, death cult and deities. Fireclay models in one of the first display cases show that the structure of simple dwellings in China resembled the ones used in Egypt. And in both cultures, people kept dogs.A wide variety of statues, jewelry, ceramics and cosmetic vessels illustrate daily life patterns of the societies of both countries.

The Chinese and the Egyptians used pretty much the same type of instruments for washing, a set consisting of a vessel with a handle, and a water bowl. Almost the only thing that differs is how these bronze vessels were decorated.

What also differs are the materials used by both cultures, as available local raw materials were different. Along with bronze, the Chinese used varnish for their typical luxurious goods. In Egypt, by contrast, this material was not available. That's why the Egyptians resorted to glass for their luxurious objects, as demonstrate 3,500-year-old bottles of opaque glass that were used to keep oils and perfumes. 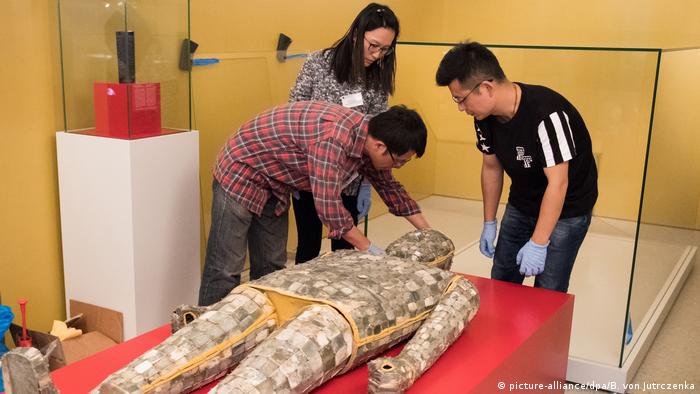 Great care is taken with the precious jade robe, a loan item from China's Xuzhou Museum

A comparison between Chinese and Egyptian cultures is particularly interesting when it comes to death cults. As precious burial objects show, both societies developed very complex rites and funeral customs. One of the most impressive loan items from Shanghai is a jade robe in which a man called Liu He was ceremoniously buried in the era of the western Han dynasty. The greenish robe made of 2,216 little jade plates held together by silver threads recalls a suit of armor intended to protect the soul and the body of the dead in the afterworld. After all, the Chinese considered jade as a symbol for immortality.

Contrasting with this Chinese exhibit is a mummy casing of an Egyptian woman called Nes-Chons-pa-cheret who is believed to have died 700 years earlier than Liu He. Winged deities painted on her cartonnage were believed to protect and conserve the mummified body for eternity.

The exhibition "China and Egypt. Cradles of the World," running from July 6 until December 3, 2017, shows exhibits from ancient Egypt and ancient China, some of which are shown in Europe for the very first time.

Archaeologists have uncovered an Ancient Egyptian city dating back more than 7,000 years near Abydos, thought to be one of Egypt's earliest capitals. Officials hope the find can help the suffering tourism industry. (24.11.2016)

The surprising similarities between ancient Egypt and China

A Berlin exhibition explores how people in ancient Egypt and China had more things in common than commonly assumed - including death cults and funeral rites, drinking habits and cosmetics. (12.07.2017)

Amid a surge of cases caused by the omicron variant of the coronavirus, 34 countries are reporting record numbers of weekly cases since the start of the pandemic. Follow DW for the latest.

Are election posters obsolete? Researchers don't think so. These campaigning staples are a proven game-changer for political parties and go back a long way.