Archaeologists have uncovered an Ancient Egyptian city dating back more than 7,000 years near Abydos, thought to be one of Egypt's earliest capitals. Officials hope the find can help the suffering tourism industry. 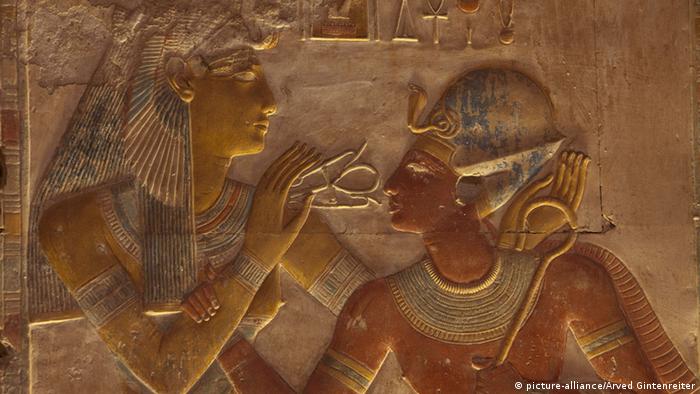 Archaeologists working in Egypt announced on Wednesday that they had discovered a city dating back more than 7,000 years about 250 miles (390 kilometers) south of Cairo. The site includes 15 large tombs, indicating a high social standing for those buried there, as well as domiciles and pottery.

The tomb of a previously unknown Egyptian queen has been discovered by Czech archaeologists. It is thought to belong to Khentkaus III, the wife of Pharaoh Neferefre who ruled 4,500 years ago. (05.01.2015)

Egypt vows to step up hunt for Nefertiti

Egyptian authorities have given credence to a theory that Nefertiti's tomb lay behind a wall in Tutankhamun's burial chamber, by vowing to investigate. Egyptologist Nicholas Reeves first made the claims in August. (01.10.2015)

The find was located near the well-known ancient Egyptian city of Abydos, most famous for its temple dedicated to Seti I, the father of the most famous pharaoh in history – Ramesses the Great.

"This discovery can shed light on a lot of information on the history of Abydos," said Antiquities Minister Mahmoud Afifi in a statement.

"The size of the graves discovered in the cemetery is larger in some instances than royal graves in Abydos dating back to the First Dynasty, which proves the importance of the people buried there and their high social standing during this early era of ancient Egyptian history," he added.

Experts hope evidence may help prove their theory that Abydos was Egypt's capital in the pre-dynastic and early dynastic periods.

The discovery could prove a much-needed boon to Egypt's key tourism industry, which has suffered in the unrest that has followed the 2011 uprising against strongman Hosni Mubarak. A 2015 terrorist attack that killed 224 tourists aboard a Russian plane that took off from a Red Sea resort further dented tourist numbers.