A group of German scientists has deciphered the meaning of one of the most spectacular archeological discoveries in recent years: The mystery-shrouded sky disc of Nebra was used as an advanced astronomical clock. 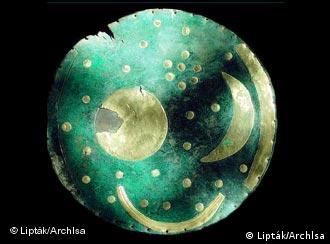 3,600 years ago, this sky disc was used as an astronomical clock

The purpose of the 3,600 year-old sky disc of Nebra, which caused a world-wide sensation when it was brought to the attention of the German public in 2002, is no longer a matter of speculation.

A group of German scholars who studied this archaeological gem has discovered evidence which suggests that the disc was used as a complex astronomical clock for the harmonization of solar and lunar calendars.

"This is a clear expansion of what we knew about the meaning and function of the sky disc," said archeologist Harald Meller. 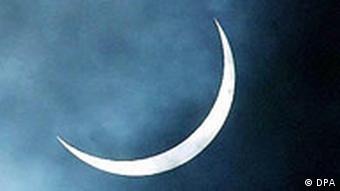 The sky disc of Nebra was not all moonshine

Unlike the solar calendar, which indicates the position of the earth as it revolves around the sun, the lunar calendar is based on the phases of the moon. A lunar year is eleven days shorter than the solar year because 12 synodic months, or 12 returns of the moon to the new phase, take only 354 days.

The sky disc of Nebra was used to determine if and when a thirteenth month -- the so-called intercalary month -- should be added to a lunar year to keep the lunar calendar in sync with the seasons.

"The functioning of this clock was probably known to a very small group of people," Meller said. 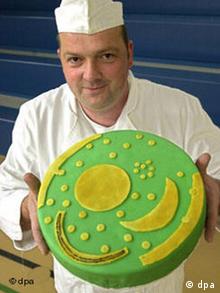 A slice of prehistory for romantic sky gazers

The 32-centimeter-wide (12.6-inch) bronze disc with gold-leaf appliqués representing the sun, the moon, and the stars is the oldest visual representation of the cosmos known to date. A cluster of seven dots has previously been interpreted as the Pleiades constellation as it appeared 3,600 years ago.

The explanation of the disc's purpose sheds new light on the astronomical knowledge and abilities of the Bronze Age people, who used a combination of solar and lunar calendars as important indicators for agricultural seasons and passage of time.

"The sensation lies in the fact that the Bronze Age people managed to harmonize the solar and lunar years. We never thought they would have managed that," Meller said.

According to astronomer Wolfhard Schlosser of the Rurh University at Bochum, the Bronze Age sky gazers already knew what the Babylonians would describe only a thousand years later.

"Whether this was a local discovery, or whether the knowledge came from afar, is still not clear," Schlosser said.

From Saxony-Anhalt to Babylon 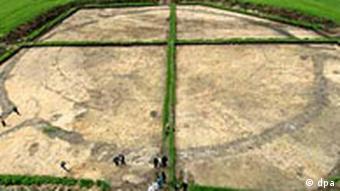 Ever since the disc was discovered, archaeologists and astronomers have been puzzled by the shape of the moon as it appears on the disc.

"I wanted to explain the thickness of the crescent on the sky disc of Nebra because it is not a new moon phase," said Hamburg astronomer Ralph Hansen.

In his quest to explain why the Nebra astronomers created a sky map with a four or five days old moon on it, Hansen consulted the "Mul-Apin" collection of Babylonian documents from the 7th and 6th centuries B.C.

These cuneiform writings represent, according to Hansen, a compendium of "astronomic knowledge from the earliest times." They also contain a calculation rule for the crescent that looks strikingly similar to the one from Nebra.

According to the ancient Babylonian rule, a thirteenth month should only be added to the lunar calendar only when one sees the constellation of the moon and the Pleiades exactly as they appear on the Nebra sky disc. 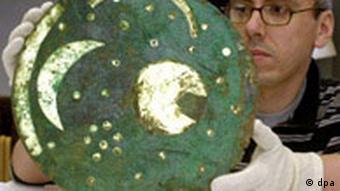 The sky disc of Nebra was first discovered by treasure hunters

The Bronze Age astronomers would hold the Nebra clock against the sky and observe the position of the celestial objects. The intercalary month was inserted when what they saw in the sky corresponded to the map on the disc they were holding in their hands. This happened every two to three years.

But the German researchers also discovered that in the 400 years that the disc was in use, its status had evolved. The perforations on the edge of the object as well as a ship that was later added to the map suggest that the knowledge about the lunar calendar's shortage of days was lost along the way.

"That means, that in the end the disk became a cult object," Meller said.

The disc was found in 1999 by two previously convicted treasure looters. It was seized by the authorities in 2002 along with other Bronze Age objects in a police operation in Switzerland.

A project to faithfully reconstruct a 7,000 year-old solar observatory, the oldest of its kind in Europe, began this week at Goseck in the German state of Saxony. (June 3, 2006)