There has been an unexplained spike in deaths in Germany's blue tit bird population. One NGO is now advising "social distancing" for birds. 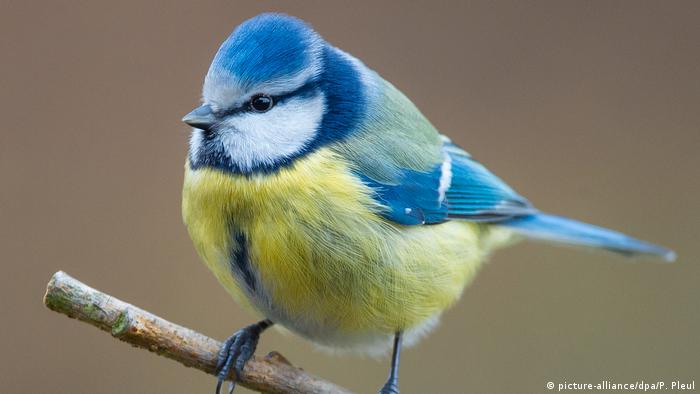 An unknown contagious disease is affecting Germany's blue tit bird population, said conservation non-governmental organization NABU. It received over 11,000 reports from the public of sick or dead birds between April 9 and April 17.

The Eurasian blue tit is a small bird native to Europe. It is around 12 cm (4.7 in) long with blue and yellow feathers. A spate of blue tit deaths in Germany, first noted on March 11, prompted NABU to launch the self-report survey.

Particularly hard-hit are blue tits in the lower Mosel wine region and the region around the city of Oldenburg, in Lower Saxony. "At least in these regions there is a noticeable death rate above all among the blue tit population," said NABU on its website.

The disease appears to mainly affect blue tits, but the great tit and other small song birds are sometimes infected.

Is a lung disease causing the deaths?

NABU is not sure what is causing the blue tit deaths. It appears the disease is transmitted where birds congregate – sick birds are often found on the ground near to bird feeders. Some birds appeared to be experiencing breathing difficulties, said NABU.

NABU has ruled out other illnesses because this one has appeared at a different time of year and it targets a different bird species. The Usutu virus is prevalent in summer and affects black birds. The West-Nile virus is also only prevalent during mid-summer.

NABU is expecting laboratory tests back on April 27 to provide further information on the cause of the disease. In the meantime, the organization advises "social distancing" for birds: people should stop providing feed trays, tables and drinking spots if sick birds are spotted during feeding.

Despite the illness, the Eurasian Blue Tit is classified as a species that is "increasing" by the International Union for Conservation of Nature's Red List of Threatened Species (IUCN red List) – the world's most comprehensive inventory of the global conservation status of biological species.

Wadden Sea in the era of climate change

The Wadden Sea is known for its millions of birds. Some stay all year, others are just passing through the intertidal zone off northwestern continental Europe. Here are a few of our favorites. (16.01.2020)

Known as a symbol of love, peace and happiness, the turtle dove, sometimes knowns as a love bird, is flirting with extinction. A German environmental protection group has named it the 2020 bird of the year. (11.10.2019)