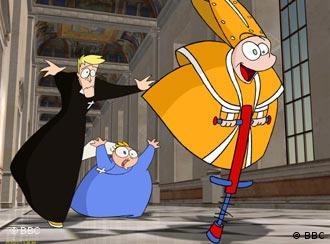 The hopping pope has some Catholics hopping mad

Father Nicolas, a clerk at the Vatican caters to an infantile Pope who loves horror movies and pogo sticks. He tries to stay righteous in spite of his attraction to vixen Sister Penelope and the evil machinations of three money-obsessed cardinals.

It's a cartoon series called "Popetown," a parody of the Vatican. And it is so controversial that the Catholic Church in Germany, where it is to be aired in May, is already trying to persuade MTV not to air the show.

"We have not given up hope that dialogue with the direction of MTV will lead to a decision to cancel the screening of the series and to consideration for the feelings of Christians in our country," the German Bishop's Conference, the Catholic Church's highest office in the country, said in a statement.

It said it would also complain to the relevant authorities about an advertisement for the cartoon series, saying it mocked the Christian faith. 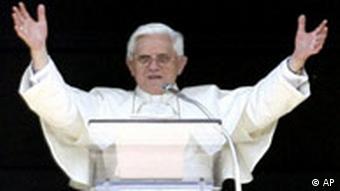 Pope Benedict would most likely not be amused by "Popetown"

The advertisement, which shows a laughing man with a crown of thorns watching television, "mocked and ridiculed the central tenets of the Christian faith," it added.

The latest cartoon to court controversy because of its irreverent take on religion, "Popetown" was originally produced for the BBC but the British broadcaster decided in 2004 not to screen it because it was too controversial.

Referring to the recent controversy over the publication of caricatures of the prophet Mohammed in European newspapers, Joachim Herrmann, a leader of the Bavaria-only Christian Social Union party, said MTV would have thought twice about poking fun at Muslim clerics in a similar way.

"I demand that the broadcaster stop trampling on the religious feelings of Christians, and to shelve the program as well as the tasteless advertisement," Herrmann said.

"It is not acceptable that the Christian faith in particular is dragged into the dirt just because it is easier and less dangerous," he added.

Sister Penelope doubles as a journalist in the show

MTV plans to start screening the 10-part series, which is billed as the story of a "crazy pope" running a deeply corrupt state, in Austria, Germany and Switzerland on May 3. 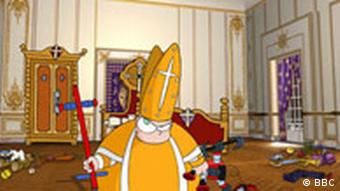 The series depicts an infantile pontiff

Earlier on Monday, Germany's lay Catholics also protested against the planned "Popetown" season and the advertisement.

"We call on all Christians in Germany to join our call that the series 'Popetown' should not be shown," the Central Committee of German Catholics said.

It called the advertisement a "repulsive mockery of the Catholic Church" and an attack on the Christian faith.

A spokesman for MTV in Berlin said the Catholic group had on Monday threatened legal action unless the music channel cancelled the series.

"So far we do not have any plans to change our schedule. We will still start screening on May 3," he told AFP.

"Popetown" has already been released on DVD in the UK and Australia and first aired in New Zealand.

The EU's foreign policy chief has begun a tour of the Middle East to defuse the row over caricatures of the Prophet Mohammed. Meanwhile, new cartoons in a German paper have sparked anger from Iran. (Feb. 15, 2006)