Europe No Stranger to Blasphemy | Europe| News and current affairs from around the continent | DW | 07.02.2006

Violent Muslim protests over cartoons published in European papers have left the continent reeling. But it's not the first time Europe has a raging blasphemy controversy on its hands. 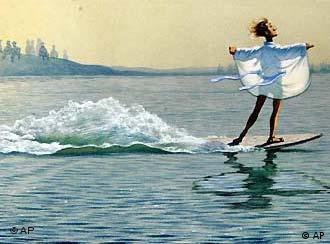 Not everyone likes depictions of Jesus by Austrian cartoonist Gerhard Haderer

Burning European embassies, incensed mobs, boycotts of Western goods and a tight security ring around journalists fearing for their lives -- the events of the past week are certainly not what Danish paper Jyllands-Posten envisaged when it printed 12 cartoons satirizing the Prophet Mohammed last September. Now European newsrooms are grappling with the issue of press freedom and how far they can go in its name.

"It's the burning question of the day," said Robert Shaw, information and human rights officer at the Brussels-based European Federation of Journalists. "The media needs to openly discuss the effects of the affair and also key things, like the importance of not compromising on editorial independence."

Yet the matter appears to be more than an open-and-shut case about press freedom.

As violent protests by Muslims spark disbelief in Europe and politicians agonize over a "clash of cultures and values," others point out that it's not the first time Europe has faced a "blasphemy" controversy.

"These things have an old tradition. It's really not a new story," said Götz von Olenhusen, a Freiburg-based expert on media law.

Von Olenhusen pointed to one of the most famous cases, in the 1920s, involving three graphics by famous German artist George Grosz.

One of them showed Jesus on the cross with a gas mask and army boots and the slogan "Hold your tongue and continue serving." The trial lasted three years and Grosz appealed twice until he was finally acquitted.

The media law expert pointed out that even in recent years, the authors of satirical works on Christianity and the Church have ended up in court. 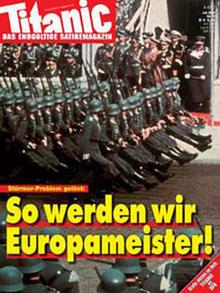 "This is how we'll become European Champion," says one Titanic cover about soccer

The German satirical magazine Titanic has been dragged to court eight times in 15 years by church groups -- four times for denigrating the pope, thrice for ridiculing religion and once because a bishop felt personally insulted. However, none of the suits ended in favor of the church groups.

But German regional courts have successfully used an anti-blasphemy law dating back to 1871 in a few less prominent cases.

One involved a drawing of Jesus on the cross in the form of a mouse trap and another of the crucified Jesus with the words "Masochism is Curable." A musical play by the cabaret group "3 Tornados" which ridiculed the Catholic doctrine of the immaculate conception by portraying crucified pigs was also banned.

The anti-blasphemy law says that anyone who publicly or through written works "insults the religious beliefs of another in such a way that it disturbs public peace" can be fined or face a prison sentence of up to three years.

Though the law is not confined to the Christian religion, experts point out that it's been largely Christians who have invoked it.

At the same time experts stress that, in Germany, cases of blasphemy are largely played out in public debate rather than ending up in court.

On a European level, Germany also has very liberal laws when it comes to freedom of expression and art, von Olenhusen added. 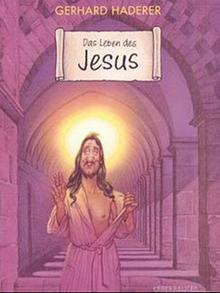 Austrian caricaturist Michael Haderer, for instance, was sentenced in absentia to six months in prison in Greece for his comic book "The Life of Jesus." The work showed Jesus as a marijuana-smoking hippie. In Austria too, the tough anti-blasphemy law prohibits ridiculing religion and punishes the offense with six-month jail terms.

Experts also remain certain that the controversy over the Mohammed caricatures couldn't be deemed blasphemous in Germany.

Michael Schmuck, a media law expert in Berlin, pointed out that instances of blasphemy found in satirical works are covered by the German constitution's article on artistic freedom and are practically unassailable in most cases.

"When it comes to artistic freedom, the courts usually admit only a personal injury towards a living religious person, such as the pope, and not just generally insulting a religion, as is the case in the Mohammed caricatures, since the Prophet isn't a living person," Schmuck explained.

"Also the person who created the works must deliberately intend to disrupt the public peace," Schmuck said. "That can hardly be said of the Danish caricaturists who were merely trying to draw attention to a social problem."

Denmark itself, where the Mohammed drawings were first published, has a law providing for fines and up to four months in jail for anyone who "publicly offends or insults a religion that is recognized in the country."

However, a court case brought against Jyllands-Posten by 11 Muslim groups last October was thrown out; The judges said freedom of expression was more important than the ban on blasphemy.

"A question of good taste"

In light of the controversy over the Mohammed cartoons, experts agree that the only question for the media is one of ethics and sticking voluntarily to self-imposed press codes.

"At the end of the day, it's a question of good taste whether to publish such caricatures or not," said von Olenhusen.

"You have to ask yourself what kind of statement you're making once the satirical elements have been stripped away," he said.

Some Muslim leaders have urged Europe to use blasphemy laws against newspapers that publish cartoons containing representations of the Prophet Mohammed. Here's a look at the differing laws in European countries. (Feb. 7, 2006)