Osama Al-Habahbeh has been in the thick of the controversy over the cartoons published in Danish newspaper "Jyllands-Posten" that have enraged Muslims worldwide -- both as a reporter and as a Danish Muslim. 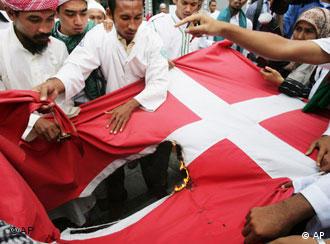 Osama Al-Habahbeh said he understood the offense the drawings had provoked but he condemned the extreme reactions to the cartoons from the Muslim world as being "over the top" and denounced the violence and the flag-burnings.

"That's not the way of having a dialogue, a conversation," said the journalist, who has reported for Arab media from Denmark for more than 20 years.

While the cartoon row has exploded in a wave of protests across the Middle East and opened a debate around the world, Danish analysts say closer to home, they represent the problems Denmark has regarding immigration, particularly of its Muslim community.

He is one of the co-initiators of a so-called "alternative network," a group of Danish Muslims who started to meet recently to provide journalists and others a wider spectrum of views from the Muslim community.

"Some call us moderate Muslims, some call us secular Muslims, we call ourselves Muslims," said Al-Habahbeh. "We don't go to mosques. We are European Muslims and don't want to be represented by the imams. Our aim is to offer an Islamic voice in the dialogue."

When it comes to Muslims, Denmark is in the midst of a crisis, which has been provoked by the Danish government, according to Al-Habahbeh. The populist anti-immigrant Danish People's Party has played a prominent role in antagonizing Danish Muslims.

Leading members of the party have openly said Islam is not a religion but a terrorist organization. And without the far-right party's support, Prime Minister Anders Fogh Rasmussen's minority coalition of liberals and conservatives would neither have been able to come to power nor to stay there. 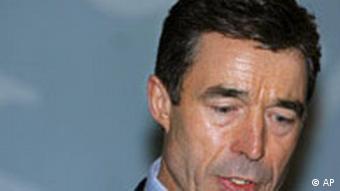 Rasmussen could have prevented the conflict, Al-Habahbeh said

An opinion poll carried out between Monday and Wednesday this week, when the controversy reached a climax with riots in the Gaza Strip, showed that the People's Party has profited. Danish support for the party increased from 12.1 percent to 14.5 percent, Greens polling group said. Both of the governing parties' standings remained stable.

On the opposite side from People's Party, the centrist Det Radikale Venstre -- whose most vocal personality in the current conflict, parliamentarian Naser Khader, is also a co-initiator of the alternative network of Muslims -- saw its support increase from 9.2 to 10.7 percent.

"The Mohammed drawings go straight back to the immigrant debate," political scientist Lars Bille of Copenhagen University told Boersen newspaper. "The fronts are becoming sharper. And here people are looking towards (Det Radikale Venstre) and the People's Party, which each make up a pole in the debate."

Fodder for the taking

In such an inflamed atmosphere, the offending cartoons themselves weren't the real issue, Al-Habahbeh said. Instead they merely offered fodder to Muslim extremists as well as to the Danish right-wing.

"The right-wing groups are using them to say that a Muslim can never be a democrat," he added. "The actions taken by those in some Arab countries, like flag-burning, are also being used to strengthen racist arguments here in Denmark."

Message to the Danes

The journalist said the government could have prevented the whole conflict from escalating three months ago when 11 Arab ambassadors asked to see him concerning the cartoons. Instead Rasmussen sent a message to the Danes. 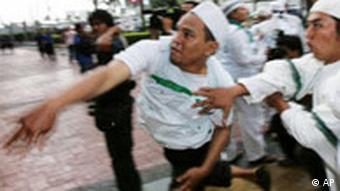 Though the current conflict may eventually be overcome, Al-Habahbeh said, he doesn't have high hopes that the deeper crisis will be resolved anytime soon.

"Even though the paper apologized, it won't make a difference. Because Muslims in Europe demand some respect as human beings, as Danes," he said. "Without fulfilling these demands I don't think the crisis will stop."

The Danish government plans to swap a controversial law targeting immigrant neighborhoods for another that cracks down harder. Rights groups warn that such moves could violate current laws against discrimination.