Mass protests, threats of violence and boycotts in the Arab world are exaggerated reactions to the Mohammed cartoon and an example of how governments instrumentalize hatred against the West for political purposes. 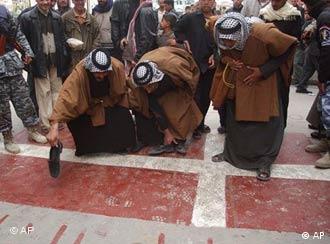 The publication of a Mohammed cartoon in the Danish newspaper Jyllands-Posten has deeply offended the religious sentiments of the Muslim community, who regard it as a Western affront to their beliefs. Not only does Islam forbid the illustration of the prophet, it sharply condemns any form of blasphemy. Many Muslims see in the cartoon a demeaning connection between their religion and terrorism and have responded with angry protests.

In more than 25 countries, enraged Muslims took to the streets to protest the caricature. They burned Danish flags and called for a boycott of Danish products. There were even numerous threats, including bomb threats targeting western citizens and diplomatic missions. Some, such as the Kuwaiti Islam scholar Sheik Nasem Almisbah, even called for the death of the cartoonist.

The majority of Arab governments only made matters worse by adding fuel to the fire of angry protestors rather than seeking to calm them. Saudi Arabia, Kuwait and Libya, for instance, recalled their ambassadors to Denmark and demanded a severe punishment for those responsible as well as an official apology from the Danish government.

No separation of church and state Muslims feel personally offended by the caricatures and the attitudes behind printing them.

Such demands show that Arab governments are incapable of understanding the relationship between the state and freedom of expression as it is practiced in Europe. While the right to free speech is anchored in European constitutions and a clear separation between church and state defines daily life, Islam dominates daily life in the Arab world. As a result many Muslims cannot comprehend the differentiation in Europe. They feel personally offended as soon as their religion is presented in a hurtful manner. They also do not understand that politicians in the western world have no direct influence over the media, as is commonly the case in the Arab world.

However, the harsh reactions to the cartoon overstep the boundaries of acceptable protests. Even though the Mohammed caricature provokes, it by no means justifies an incitement to murder or a call for boycotts. It is also not reason enough for the Arab world to instrumentalize the protests for political purposes.

In the Arab world, particularly in Iraq, hundred of people are killed and mosques and churches attacked weekly. But neither politicians nor mass demonstrations criticize the situation. Thus, one could presume political rather than religious motives are behind the exaggerated reactions to the Mohammed cartoon.

Islamist groups are attempting to channel the hatred against the West to bolster their own political influence. Through their apparent solidarity with the wave of protest Arab governments can detract from domestic failure and discredit western calls for reform. Most likely they will also take advantage of the situation to cut back on freedom of the press in their countries.

The escalation of events in the Palestinian territories on Thursday is a good example of how political groups have instrumentalized the raging sentiments. It wasn't Hamas or jihad that fueled the violent protests, but rather the militant arm of the secular Fatah party, which lost last week's parliamentary election. For them, the protests offered the perfect opportunity to express frustration over the lost ballot. 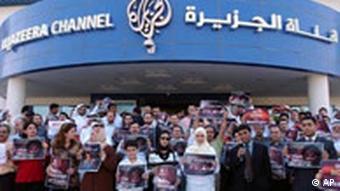 Up until now, the Arab media has taken a differentiated approach to covering the dispute. While well-known media groups such as Al Jazeera addressed the topic in the most prominent manner, even the renowned, trans-Arabic newspaper alhayat placed the topic in the second and third most visible positions. Media close to the government as well as relatively independent media quickly showed solidarity with their readers that the illustration of the prophet was both deeming and offensive. Critical voices remained the exception.

The editorialist for the Jordanian newspaper al-Shihan was one of the exceptions. In an opinion piece, he provoked readers by asking: "What damages Islam the most: these drawings or pictures showing hostage takers decapitating their victims in front of running cameras, or a suicide bomber who decides to detonate himself at a wedding in Amman?"

Europe -- and Germany in particular-- have gone to great extents in recent years to intensify their dialogue with the Arab and Islamic world. But now the dispute over the cartoon threatens to reverse any progress in bringing the two sides together. It is the view of many Arab commentators that such publications only help the extremist groups who are not interested in interacting with the West. According to Abd Albari Atwan, editor-in-chief of the pan-Arabic newspaper al Quds Al-Arabi, targeted offenses such as the caricature only serve to poison the relationship between Islam and the West. Further publications in other European countries will only widen the rift between the two sides.