Protests in the Muslim world continued on Thursday, as many editors and leaders in the region denounced European newspapers for reprinting cartoons depicting the prophet Mohammed. In Germany, press freedom was stressed. 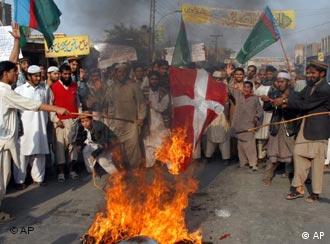 The wave of protests, some threatening violence, continued to spread across the Middle East on Thursday as Muslims expressed their outrage over the cartoons first published in a Danish newspaper last year.

The issue, which has highlighted the stark differences of opinion between the secular West and the Islamic world, is now feeding a sharpening debate over freedom of expression and human rights.

In Tunisia and Morocco, copies of French tabloid France Soir, which on Wednesday reprinted twelve cartoons published by Denmark's Jyllands-Posten, were banned. In Pakistan, hundreds of protestors gathered to chant "Death to Denmark" and burn Danish and French flags.

The offending cartoons, originally published in September in Denmark and reprinted last month in Norway, include drawings of Mohammed wearing a headdress shaped like a bomb. Another picture shows suicide bombers being told by Mohammed that paradise is running short of virgins.

Muslim tradition considers any pictorial depiction of the Prophet Mohammed to be blasphemous.

In one of the more alarming protests, Palestinian gunmen on Thursday scaled the surrounding walls of European Union offices in the Gaza Strip, firing their guns in the air and demanding an apology for the caricatures. 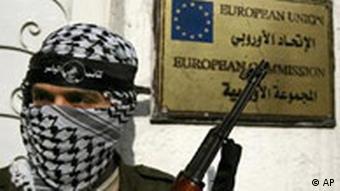 "We will watch the office closely and if European countries continued their assaults against Islam and against the Prophet Mohammed, we will turn this office into ruins," a spokesman for the Yasser Arafat Brigades, an armed faction of the Fatah party, told Reuters.

The group set a 48-hour deadline.

Another armed group, called the Abu el-Reesh Brigades, said citizens of Norway, Denmark, France and Germany in Gaza "will be in danger" if their governments do not swiftly apologize.

A European Union official called the threats "unacceptable." The European Commission's representative in the West Bank and Gaza, John Kjaer, told reporters that "necessary security measures" had been taken, but he would not go into detail.

Several European journalists have since left Gaza for their own safety.

The anger of the protestors on the street has been echoed by leaders in the Muslim world, many of whom have condemned papers' decisions to reprint some or all of the cartoons. Newspapers in France, Germany, Hungary the Netherlands, Switzerland, Spain and Italy reran some or all of the drawings to show their support for press freedom. 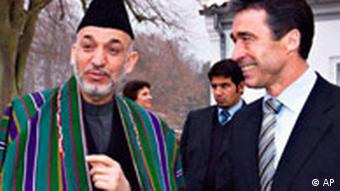 Afghan President Hamid Karzai strongly criticized their publication, saying that is was "an affront … for hundreds of millions of people."

Turkish Prime Minister Tayyip Erdogan was quoted as saying the publication showed that press freedom should have limits.

"The cartoons of the Prophet Mohammed are an attack on our spiritual values. There should be a limit to press freedom," he was quoted by the state Anatolian news agency.

Presidents Hosni Mubarak of Egypt and Mahmoud Ahmadinejad of Iran joined in the criticism. Mubarak said freedom of the press should not be an excuse for insulting religions. Iran's president was quoted on state television as telling King Abdullah of Saudi Arabia by phone: "Muslims should display firm reaction to such disgraceful acts."

However, most European commentators and officials lined up behind press freedom, even if some did say initial publication of the caricatures was unfortunate, if not tasteless.

Robert Menard, secretary general of Reporters Without Borders, a Paris-based group which monitors media developments, said in an interview: "All countries in Europe should be behind the Danes and Danish authorities to defend the principle that a newspaper can write what it wishes to, even if it offends people."

France Soir, whose publication set off the current row, declared: "No religious dogma can impose its view on a democratic and secular society." However, the paper's editor, Jacques Lefranc, was dismissed by its French Egyptian publisher in response the wave of criticism by Muslim groups. 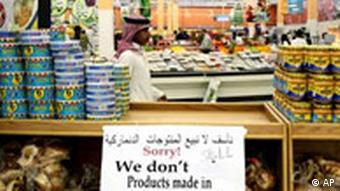 Despite that, the paper's journalists on Thursday stood behind their editor's decision, printing a front page picture and editorial strongly defending the right to free speech.

"Imagine a society that added up all the prohibitions of different religions. What would remain of the freedom to think, to speak or even to come and go?" the paper wrote.

In Germany, opinion has also largely fell on the side of free speech, although the DJV journalism union was critical of the republication of the cartoons in Germany on Wednesday, saying it violated the country's press codex, a series of guidelines regarding ethics in journalism.

One paragraph of the codex condemns the publication of content that could offend the religious sentiments of a group of people.

On Thursday, however, DJV changed its position, saying that publication in the conservative Die Welt and the left-leaning taz newspapers did not conflict with the ethics code.

"The reproduction was part of the overall mission of journalism," DJV spokesman Hendrik Zörner told DW-WORLD. "It serves to document the debate and should be differentiated from the first publication (of the cartoons) in Denmark." 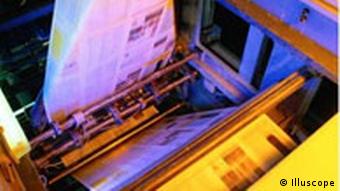 While several publications and officials expressed understanding for Muslim anger, they described the reaction in the Middle East as excessive.

A Bishop of the Protestant Church in Germany, Margot Käßmann, in an editorial in Der Tagesspiegel newspaper, said the response was "absolutely inappropriate and in my opinion, purposefully controlled. Sometimes Christians' feelings are hurt as well, but the answer to that cannot be threats of violence!"

The EU's Austrian presidency rallied Monday to the defense of the freedom of the press and expression amid growing Muslim anger about controversial Danish cartoons portraying Prophet Mohammed. (Jan. 30, 2006)