Most in Germany back Berlin′s coronavirus response | Germany| News and in-depth reporting from Berlin and beyond | DW | 04.09.2020

Most in Germany back Berlin's coronavirus response

People in Germany broadly support the government's response to the coronavirus pandemic, and Chancellor Angela Merkel herself, a new survey has shown. 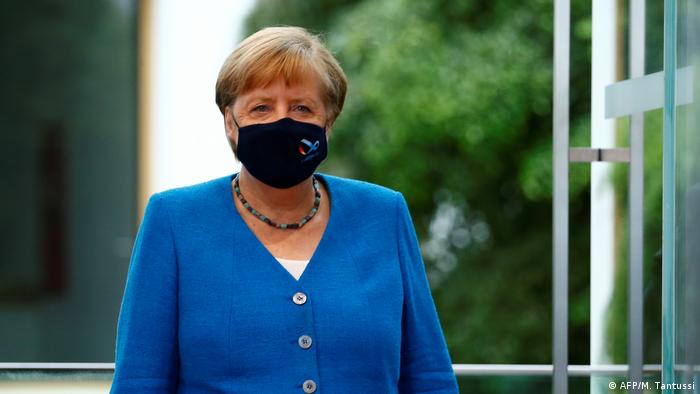 Protests against the German government's measures to slow the spread of the coronavirus — which most recently drew international attention to Berlin — do not appear to have changed many minds domestically, according to the latest Deutschlandtrend survey by the research institute Infratest Dimap. The survey was conducted on August 31 and September 1, after a coalition of nationalists and pandemic-naysayers made a show of their attempt to "storm" the Reichstag as part of Saturday's demonstration in Berlin.

Such a large proportion of Germany's population has not been so satisfied with the work of the government since 1997, according to the latest numbers. Of the roughly 1,000 people surveyed, 66% said they were satisfied with the work of the governing grand coalition of Chancellor Angela Merkel's Christian Democrats (CDU), the allied Bavarian Christian Social Union (CSU) and the Social Democrats (SPD).

A record 72% of respondents said they were satisfied with the work of Merkel herself. It is thought that a large part of the support is thanks to the government's proactive measures to slow the spread of the coronavirus. 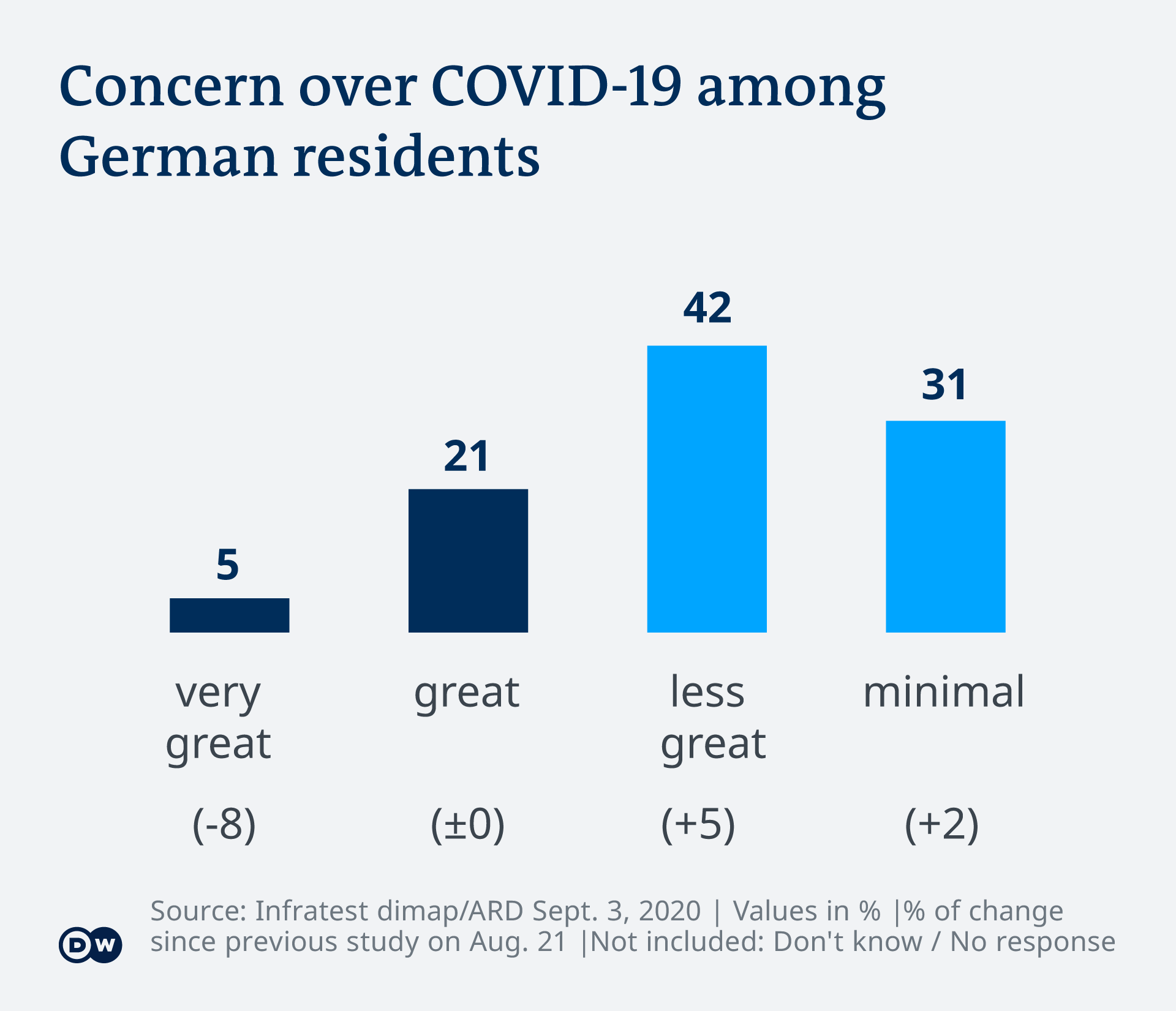 Only about a quarter of respondents said they were worried that they or a relative might contract COVID-19 now — about the same share as in spring and early summer. The number had been up in August as people began returning to Germany in large numbers from vacations abroad.

Still, many in Germany said they would be open to further pandemic measures by the government. Eighty-six percent responded that they would be open to canceling Carnival events for 2021. About two-thirds would approve of guest limits at weddings and private parties, as well as leaving the Christmas markets closed this coming holiday season.

Fifty-five percent of respondents said they would oppose mandatory-mask rules, such as those that govern places of employment in neighboring France. Sixty-six percent are against mandatory facemasks in classrooms for schoolchildren. 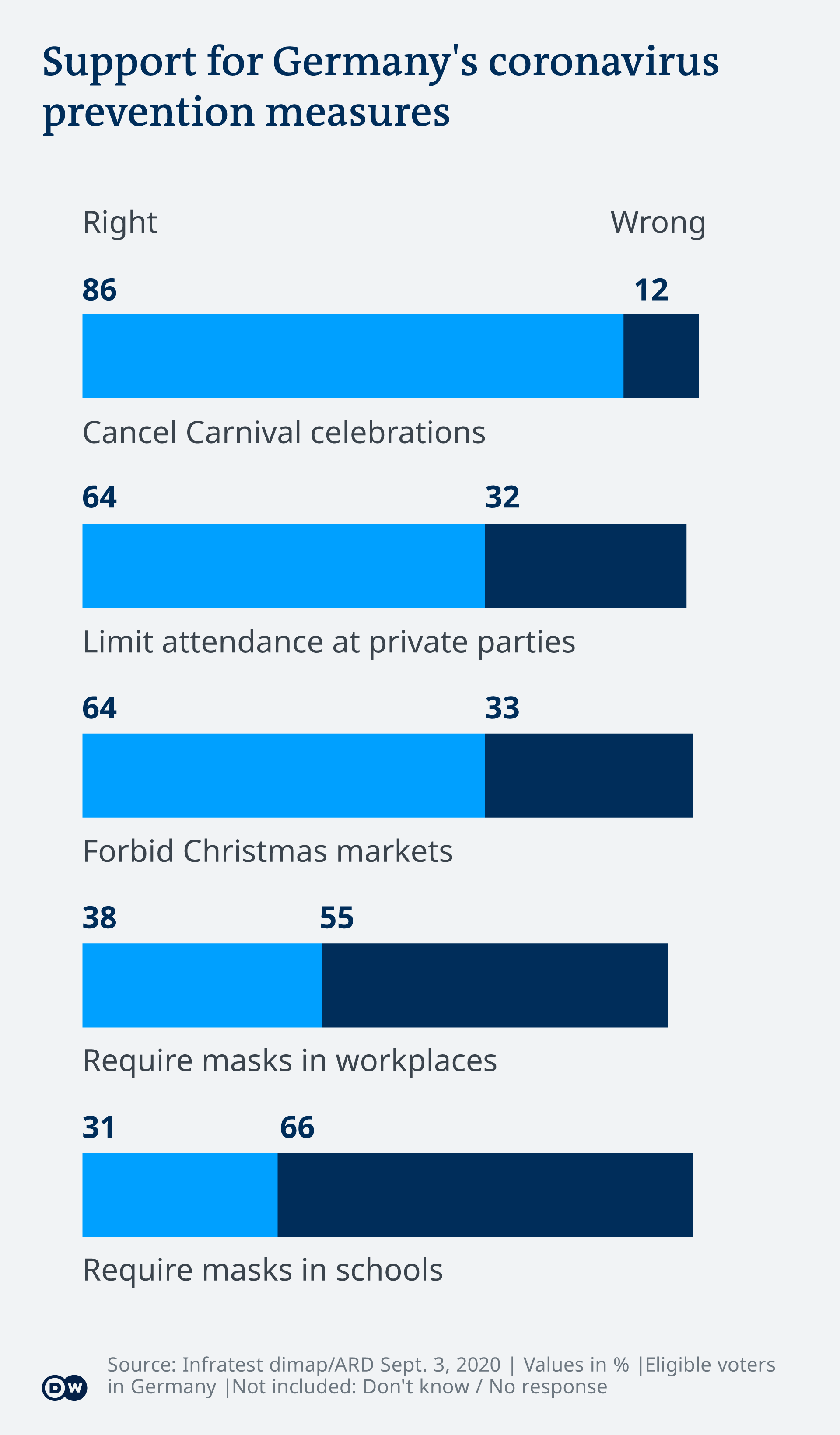 Though Merkel's political bloc has not put forth a candidate to run for the chancellorship in elections set for 2021, the favorite German conservative of survey respondents was Bavaria State Premier Markus Söder, the leader of the CSU, who received 56% support. CDU/CSU members who responded to the survey supported Söder to the tune of 75%. He has not officially declared his candidacy and has previously said he plans to stay in Bavaria — which some speculate could be a political tactic. 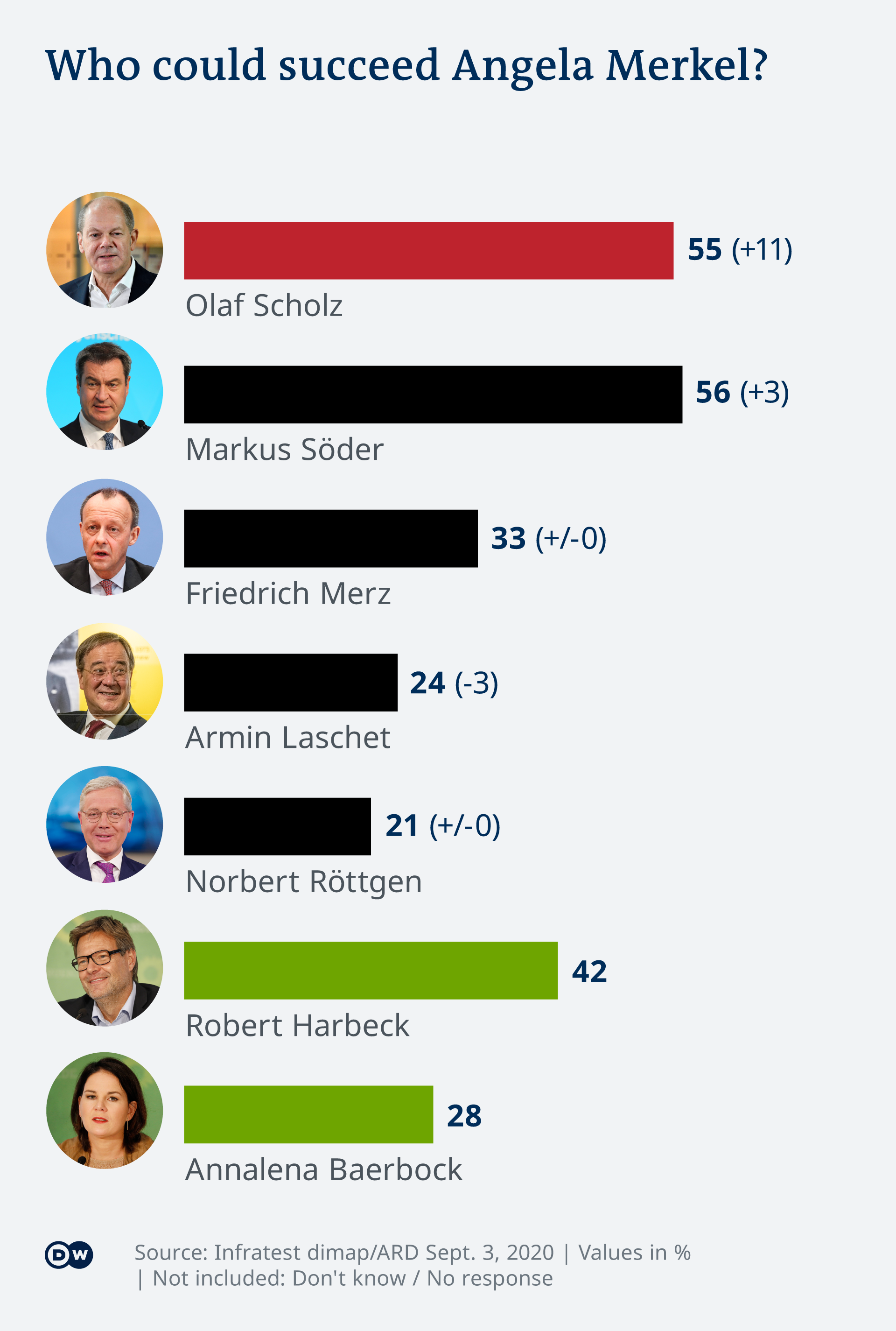 On the other side of the grand coalition, the SPD's chancellor nominee, former Hamburg mayor and Germany's current finance minister, Olaf Scholz is considered a "good candidate" by 55% of respondents — up 11 points from May.

The governing parties remain among the country's most popular, though support for the CDU/CSU was down two points, giving them a total of 36%.

The SPD may have benefited there: The party was up two points, for 17% support — its highest level since May 2019.

Up a point to 19%, the Greens remain second in popularity. The nationalist, far-right Alternative for Germany party was down a point, to 10% support. The popularity of the other opposition parties, the Left and the business-friendly Free Democrats, did not change. 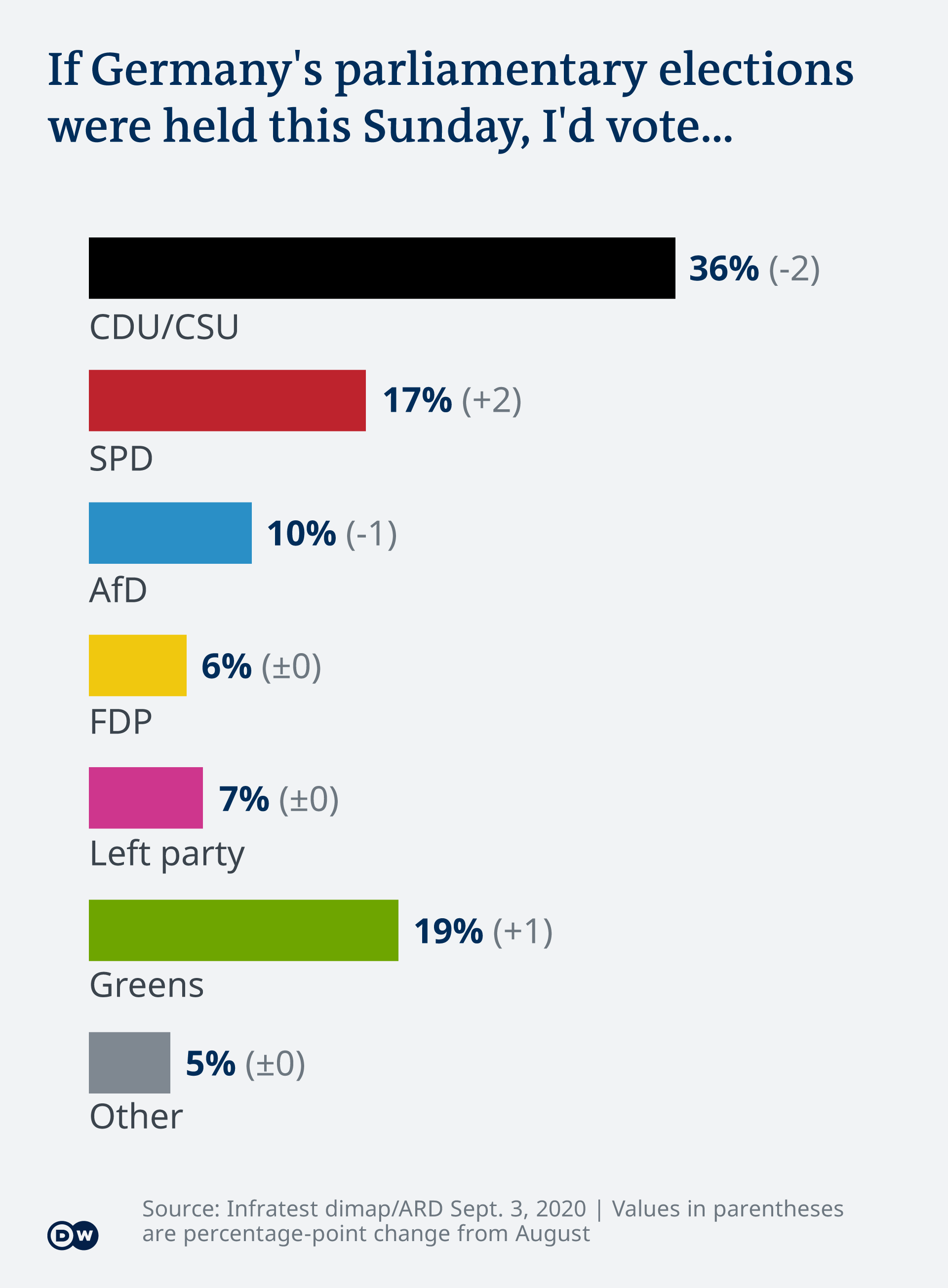 Adapted from German by MG.

Who could succeed Angela Merkel as German chancellor?

The SPD has already decided on its top candidate for the 2021 general election. But in Angela Merkel's conservative CDU/CSU bloc the positioning continues — and the Greens are tiptoeing around a difficult decision.