The Star Wars films have a cult following all over the world. But the force seems to be especially strong in Russia. In Moscow, Jedi hopefuls are honing their skills at the world's first lightsaber fighting school. 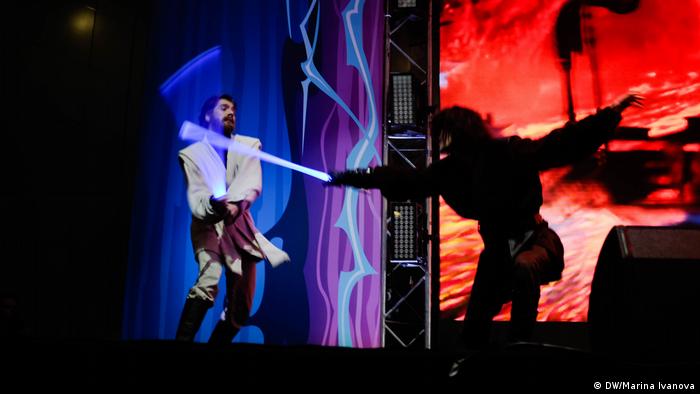 Green and red beams of light shine out of the practice room into the autumn darkness. They make the circular pavilion in this park in Moscow look almost like a spaceship. Inside, around 10 students from the Moscow School of Saber Fighting are practicing their lightsaber skills ahead of an upcoming performance. As the teacher shouts out "Defense!" and "Attack!" they jump into position. Their glowing weapons paint bright loops in the air.

This is the first lightsaber fighting school in the world. It was founded in the year 2000 — just after the first of the Star Wars prequels were released. Around 50 people train here regularly, and lessons are free for children.

Dmitry Semenikhin is running today's practice session and also heads the school. He reassures DW that knowing "the whole story of Star Wars in detail or having an encyclopedic knowledge of the spaceships used in the films" isn't a prerequisite to learning how to wield a lightsaber. But most of the people who come to the school admit they are fans of the franchise. After all, the fight scenes they perform are usually exact copies of scenes in the films.

"By taking a lightsaber in your hands and carrying out the movements that the characters in the films perform, you can fulfill your dream of becoming the characters," Dmitry explains, his eyes lighting up. 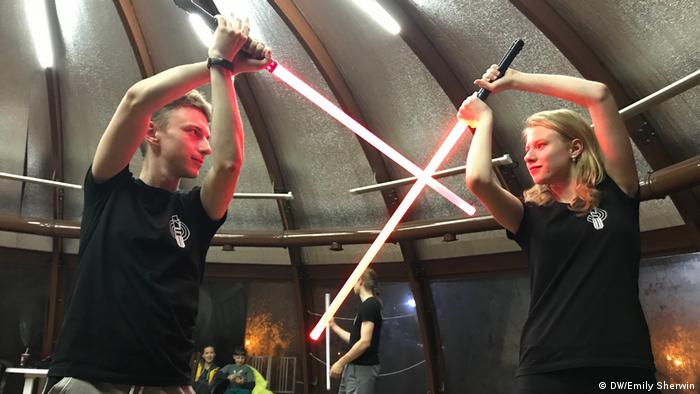 Nineteen-year-old Daria Rusakova and her dueling partner Vladimir Demenshin, 28, are preparing for their first on-stage fight. They go over their moves, locking red sabers and moving around each other in a neon-lit dance.

"I have been a fan of the Star Wars universe since I was a kid," Daria says, explaining she "first watched them at the family dacha." Vladimir admits that he had been tempted to buy a lightsaber even before he joined the school. "I decided that just buying one would be too easy. So I decided to earn it," he laughs sheepishly.

But saber fighting is more than a Star Wars fantasy for those training here. It is a style of stage fencing, which has been considered an official sport in Russia since 2008. And here at the school, the novice Jedi say it is a real workout, particularly because the movie fight scenes they are emulating are very dynamic. "I came out of my first training session and my knees were shaking — I thought I was going to sit down now and never get up," Daria says, thinking back to when she started in January. "But it gets easier with every session." Now she says she loves the physical challenge. "And also — it's Star Wars!" 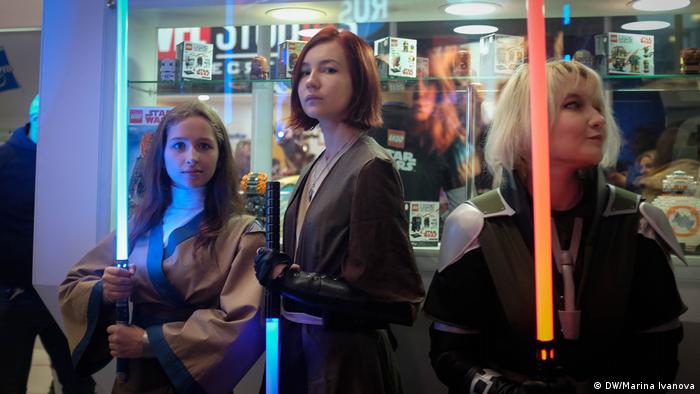 At the Russian comic convention, Star Wars costumes were popular

The saga has a broad appeal in Russia and the films have been a box office success. In the Soviet Union, however, fandom had its hurdles. The first Star Wars film was released internationally in 1977. But the first Soviet release of a Star Wars film wasn't until 1990, though pirated VHS versions were reportedly already a hit at video stores before that.

At the time, the first film in the original trilogy, now called A New Hope, was billed at cinemas as a "Galactic Western."  It was advertised with Soviet posters designed by artists who hadn't actually seen the films and had to come up with their own fantastical space creatures.

For today's Russian Star Wars fans, being true to the films is important. At the Russian comic convention IgroMir, Moscow's School of Saber Fighting students use clips from the films in their performance, fighting along with the scenes on screen and acting them out. Many of the students' costumes are copies of originals — specially sewn for the school. 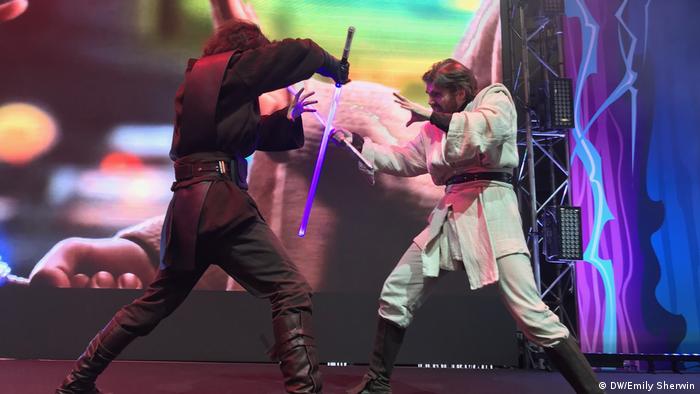 In a galaxy far, far away …

Some in the audience are just as dedicated. Robed Jedi and Stormtroopers, as well as favorite characters like Boba Fett and Obi Wan Kenobi watch the lightsaber performance on stage. "The idea of space is very popular in Russia. Plus Star Wars has the atmosphere of a fairy tale — which we also love," says one of the Jedis in the audience to explain the saga's popularity.

For many here, being a fan of the films is also a form of escapism. "I think I've always wanted to see other universes, be on other planets and see how it is there," a woman in black Stormtrooper body armor explains in a shy voice.

Saber fighting takes Daria to another world as well — and the school has clearly given her a new group of friends. She is pumped as she comes off stage at the comic convention — and relieved that her duel with Vladimir went smoothly. They have been working on it since summer. "It's a great feeling," she raves, hugging the other performers. "Saber fighting helps me relax. It helps to distract me from everyday problems in my studies, with my parents and so on. I just dive into this amazing world of fencing — and into the world of Star Wars."

Ten years after the war between Russia and Georgia, villagers near the breakaway region of South Ossetia still live under the strain of the conflict, dealing with border issues and Russian patrols. Emily Sherwin reports. (08.08.2018)