A military parade marking the 75th anniversary of the Soviet Union’s victory of the Nazis has kicked off in Moscow. The spectacular celebration takes place on the eve of a vote that could extend Putin’s rule until 2036.

Russia's delayed military parade marking the 75th anniversary of the end of World War II in the Soviet Union kicked off in Moscow on Wednesday morning with a patriotic display that some say is meant to lift President Vladimir Putin's lower-than-usual ratings on the eve of a vote that could extend his rule.

Over 14,000 troops, 200 armored vehicles, and 75 aircraft participated in the celebration in Moscow's Red Square. Representatives from 13 other countries were also present.

Reporting from Red Square, DW's Emily Sherwin said the parade "is always an opportunity for Russia to show off its role as the victor nation and also to show off its military might."

"Our dear foreign guests, comrade soldiers and sailors ... comrade officers, generals and admirals, I congratulate you for the 75th anniversary of the victory in the Great Patriotic War," President Vladimir Putin said at the ceremony.

It was a "triumph of unprecedented power," he said in his speech.

He spoke favorably of Western powers, despite recent complaints about what he characterised as an attempt by some European powers to rewrite history.

Moscow would always remember the wartime contribution made by the Soviet Union’s allies, Putin said.

He also hinted at his wish for the five permanent members of the United Nations Security Council to hold a summit to try to tackle the world's problems.

"We are open to dialogue and cooperation on the most current international questions," Putin said.

"Among them is the creation of a reliable and general system of security, which the complex fast-changing modern world needs. Only together can we defend it from new dangerous threats," he said.

President of Belarus Alexander Lukashenko was among the heads of post-Soviet states in attendance at the parade. People on the street cheered his arrival and wished him well in upcoming elections in Belarus.

Lukashenko recently outlawed protests until elections in August. The strongman has led the country for 25 years and has been described as "Europe's last dictator." 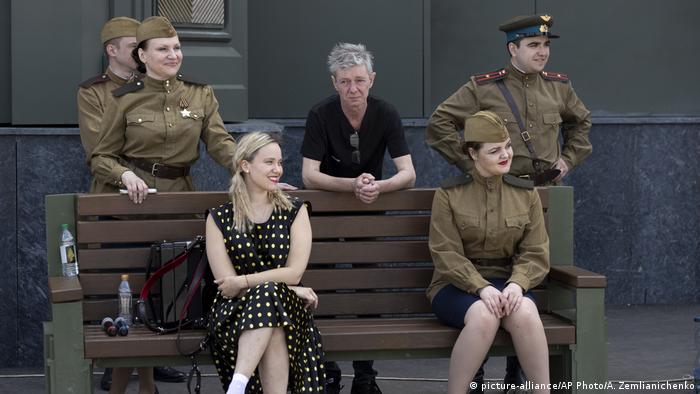 Some participants will wear period Soviet uniforms to mark the occasion

The parade, originally scheduled for May 9, had been postponed due to the coronavirus outbreaks. Critics have said it is irresponsible to go ahead with it now.

But Fyodor Ladygin, the former Head of Russian General Staff's Main Intelligence Directorate (GRU), who was in the stands in Red Square observing proceedings, told DW:: "The fact that the parade was held is right, completely right. People who have criticized the actions of the government and the president for having the parade – well that is just pettiness."

Maria Blumfeld, a 104-year-old War veteran who came to watch her daughter, told DW: "I don't have enough strength to express all my delight, I am overwhelmed by emotion. I felt like I was in another world. My pride took me over. Every time a new military detail marched by, it made me so deeply happy for our country. My heart was beating with joy."

With over 8,000 fatalities and some 600,000 confirmed infections, Russia has the third-largest coronavirus caseload in the world in gross terms, after the United States and Brazil.

According to officials, the new date was chosen to coincide with the anniversary of the first post-war parade on Red Square, when Soviet troops threw down Nazi standards in front of the Lenin mausoleum on June 24, 1945.

Despite the infection risk, DW's Sherwin in Moscow said many people on the scene told her the parade needed to happen.

"People told me about their grandmothers and their grandfathers who took part in the war effort. After all, you have to remember that an estimated 27 million Soviet citizens were killed during World War II," she said.

"Just now in his speech Putin talked about the huge sacrifices that the Soviet people had to take to, as he said, free Europe from Nazism and the huge importance of that for Russia today as well. In a way, Victory Day and the Great Patriotic War, as its known here, have become part of the official state ideology here in Russia," she added. 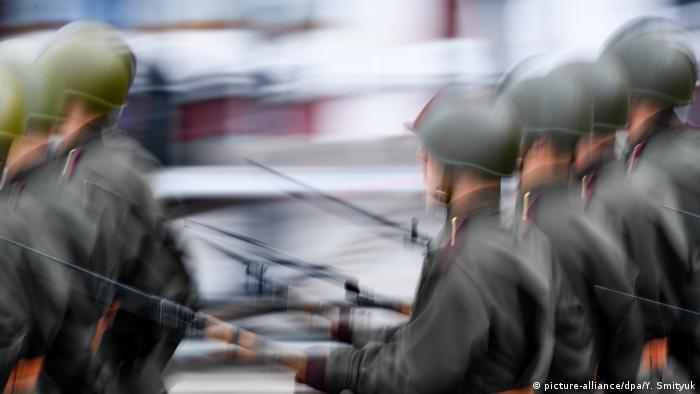 Showboating ahead of the vote

The celebration took place on the eve of a vote, open from June 25 to July 1, on constitutional changes, among them an amendment that could allow Putin two more six-year presidential terms if re-elected. Current law bars him from seeking re-election when his term ends in 2024. If approved, it would pave the way for Putin to serve longer as Russia's leader than wartime leader Josef Stalin spent in charge of the Soviet Union.

"It’s clear that the Kremlin timed this strategically," DW's Sherwin said. "They wanted to create a patriotic atmosphere among the people here ahead of that vote."

State pollster VTsIOM have said between 67% and 71% of voters will approve the change. Critics have called the vote a sham.

Others doubt the veracity of Putin's current approval rating, which currently stands at 59%. Polls show that rising unemployment, falling oil prices, and the prolonged coronavirus lockdown have coincided with a greater willingness to protest in Russia.

Speaking with the Ekho Moskvy radio station on Tuesday, economist and Putin critic Sergei Aleksashenko said that Putin was determined to hold the Wednesday parade.

"Vladimir Putin believes that the parade is a reaffirmation of his greatness, the greatness of the country and of our historical memory," he said.

Russia's prosecutor general will monitor reporting by DW and other foreign media on the public vote over constitutional reforms. The State Duma has accused them of disinformation. DW denies the accusations. (24.06.2020)

Russia has registered more than half a million coronavirus infections, making the country the third most-affected in the world. But the official death toll is under 8,000. Could some figure-fiddling be going on? (21.06.2020)

Germany is stepping up its demands for punitive measures againt Russian hackers who Berlin blames for an attack on the German parliament, the Bundestag. Chancellor Angela Merkel says Germany is facing "hybrid warfare." (14.06.2020)