Vladimir Putin opens door to stay on as Russia's president 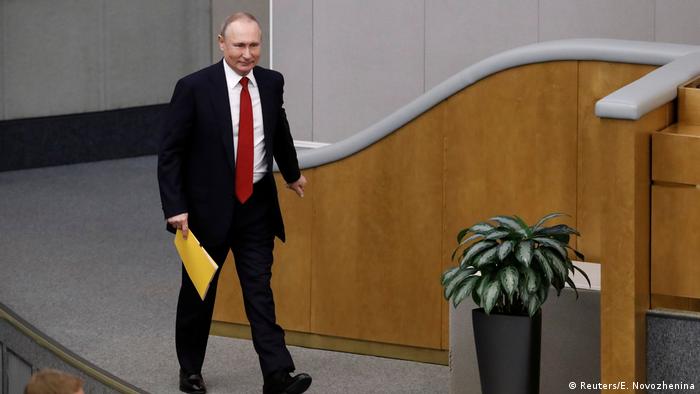 As Russia prepares for a sweeping constitutional reform, President Vladimir Putin hinted at running for president once again while addressing lawmakers on Tuesday.

Commenting on the proposal to "remove limits for any person, any citizen, including the current president, and allow for taking part in the election in future" the 67-year-old strongman said such a move would be "possible in principle."

He also indicated he would serve out his current term, which is set to expire in 2024.

"Together, regardless of all other matters, we have managed to do a lot to make the country stronger," he said. "I'm convinced that we will do much more good together — in any case until 2024, and then we will see."

The idea of resetting term limits was voiced by the pro-Putin United Russia deputy Valentina Tereshkova, a former cosmonaut and the first woman in space, during the parliamentary session on Tuesday.

Addressing other Duma lawmakers, she asked "why should we spin our wheels and philosophize, why should we create some artificial constructions?"

The current president should be given a legal option of running for the same office again "if the situation requires it, and most importantly, if the people want it," said the 83-year-old ruling party deputy.

DW correspondent in Moscow, Emily Sherwin, reports that opposition figures are preparing a rally against the "reset" of Putin's presidential terms.

The chamber approved the constitutional reform bill in the second reading out of three readings on Tuesday, after it is amended by suggestions from Tereshkova and other deputies. The reform bill would give parliament more power, including the authority to name a prime minister, but also expand the role of Russia's State Council, currently a consultative body made up of the heads of Russia's regions  It would also introduce "faith in God" to Russia's constitution and specify marriage as a union between "a man and a woman."

Many practical details of the overhaul remain unclear, with Putin's critics accusing the government of being intentionally vague to avoid scrutiny.

The bill is very likely to pass through the Putin-dominated legislature, with the referendum on the constitutional changes expected in April.

"Fifty percent of people have to approve the constitutional amendments," DW's Emily Sherwin reports. Turnout will be a key factor, she says, as many potential voters believe he will stay in power regardless of whether they vote. "The Kremlin's main job now is to get people to the ballot boxes to show them that it's important to have their say."

She says it's being seen as a "litmus test on how popular President Putin is."

Staying in office until 2036 or forever?

If the changes are approved, Putin would be able to stay in power until 2036. His Monday remarks come just weeks after he rejected the idea of a Soviet-style presidency for life.

While meeting WWII veterans in his native city of St. Petersburg in January, Putin was asked by one of them if it was time to do away with term limits for presidents. In response, Putin said it would be be "very worrying to return to the situation we had in the mid-1980s when state leaders stayed in power, one by one, until the end of their days."

"So thanks, but I think it would be better not to return to that situation," he said.

The Russian strongman has maintained his grip to power since taking over from Boris Yeltsin in 2000. He served two terms as president before switching to prime minister in 2008 and returning as president in 2012 for two more terms. Putin is already the longest-serving Kremlin chief since Joseph Stalin, who ruled the now-defunct Soviet Union for 29 years.