Russia has registered more than half a million coronavirus infections, making the country the third most-affected in the world. But the official death toll is under 8,000. Could some figure-fiddling be going on?

In Anna Klochkova's living room there is a photo of her mother, Galina Oleinik. When the latter became ill with COVID-19, Klochkova said she had to plead with doctors to take her mother to hospital.

Oleinik finally died in hospital in the Yaroslavl region on May 21. She had worked as a receptionist in a health care center in Pereslavl-Zalessky, where she was probably infected by the novel coronavirus. There was no protective clothing provided at her place of work. "I sewed my mother four-layered masks with elastic bands myself," said Klochkova.

In Russia, a pathologist has to confirm COVID-19 as the cause of death. For this reason, an autopsy of Oleinik's body was ordered. Klochkova told DW the death certificate gives infection by the novel coronavirus as one of the causes of death.

"On the day my mother died, though, there was officially just one coronavirus death, a man. My mother doesn't appear in the statistics," she said.

The governor of the Yaroslavl region, Dmitri Mironov, confirmed the man's death on his Facebook page. But after that the figure for coronavirus deaths in the region remained static for a week. DW has asked the regional health authority for clarification, but so far has received no response. 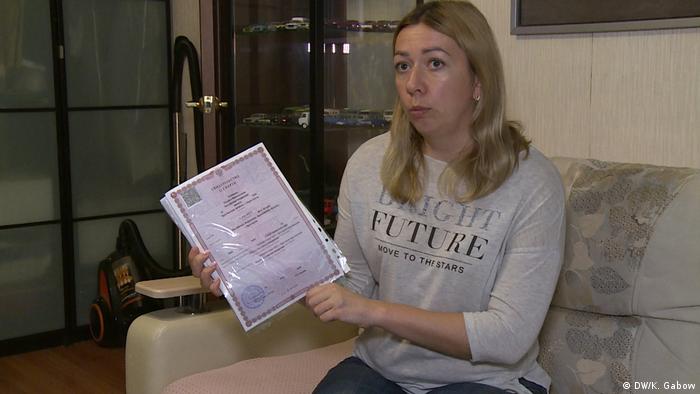 As early as May, The New York Times and the Financial Times called the Russian statistics into question, pointing out that 70% of the deaths from COVID-19 in Moscow and St. Petersburg were not included in the official figures. Russian authorities, however, have insisted that the official numbers are correct. Russia's Health Ministry responded to a DW inquiry by saying that the counting method was based on recommendations by the World Health Organization (WHO).

But the WHO's emergencies chief, Dr. Michael Ryan, said the Russian statistics on the coronavirus mortality rate were "hard to understand" and that the discrepancy between the number of confirmed infections and deaths was "unusual." In response, the WHO representative in Russia, Melita Vujnovic, told the Russian broadcaster Business FM that Ryan was not a statistician and had no experience in the field. Vujnovic insisted that Ryan had just voiced his own opinion and that the WHO had "no questions at all" about the Russian figures.

But the Russian data shows some irregularities. For example, in the Arkhangelsk region, there are two lists.

Artyom Vakhrushev, the deputy regional governor, confirmed to DW that there were separate statistics for the city of Severodvinsk in the north of the region. "A part of the population is looked after by the Federal Medical-Biological Agency (FMBA). They are mostly workers for armaments companies. The FMBA has a separate register for its patients, and they are not included in the statistics for the Arkhangelsk region on the website 'stopcoronavirus.rf,'" said Vakhrushev. The Health Ministry did not tell DW where the FMBA data is included.

Vodka and the virus

Boris Ovchinnikov from the Russian research agency Data Insight also has his doubts about the official figures. He analyzed the statistics on the rise in coronavirus infections in Russia over the period of April 30 to May 24, and discovered that the numbers in this period often ended with the numerals 99: on April 30, there were 7,099 infections, on May 8 10,699, on May 12 10,899 and on May 24 8,599 infections.

"The statistical probability that numbers in such a period of time ended in 99 four times is small," Ovchinnikov told DW. "Apparently the authorities wanted to give a round number. But they also know that people would probably find that suspicious. Before publishing the statistics, they changed them to 99." Ovchinnikov hasn't ruled out that regional and federal statistics could have been manipulated.

At the end of May, Russia's Health Ministry published a list of 101 names of doctors who had died from COVID-19. But Russian doctors have long been recording their own statistics — a "memorial list" that now contains the names of more than 400 people.

Moscow anesthetist Alexei Erlich is among the doctors who initiated the list. He also considers the official data as incomplete. "The ministry has excluded medical support personnel from the list of employees and made nurses out to be cleaning staff. Our memorial list also includes ambulance drivers, who are not considered medical personnel," he said.

Erlich believes that the Federal Service for Surveillance on Consumer Rights Protection and Human Well-Being (Rospotrebnadzor) has been lying. The head of this authority, Anna Popova, announced that the mortality rate among doctors had practically not changed in comparison to other periods. "Many doctors are not being tested. I know of hospitals where tests are banned to make the statistics look better. People are dying without appearing in the coronavirus statistics," said Erlich, who himself was infected by the virus.

For the Health Ministry, Galina Oleinik did not count as a medical worker despite her job at a health care center. For that reason, her family will not receive any financial aid. But she has been included on the doctors' memorial list.

This is of scant comfort to Klochkova, who wasn't even able to attend her mother's funeral because she was in quarantine after becoming infected herself with COVID-19. And she is certain that authorities delayed her coronavirus test, so that the statistics would look better.