There have been reports of more clashes in the eastern Ukrainian city of Slovyansk between government forces and pro-Russian militants. It comes days after dozens died in southern port city of Odessa. 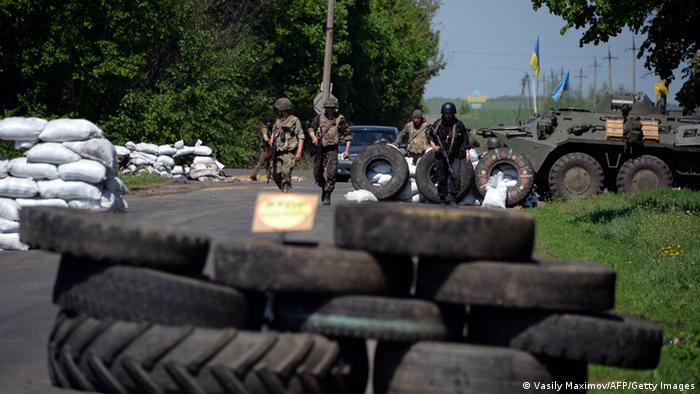 There was heavy fighting on the eastern outskirts of Slovyansk, but gunfire was heard closer to the city's center than a day earlier, according to initial reports on Monday.

"We are surrounded by a dense ring [of Ukrainian units]. Many businesses have closed because there are no more goods to trade," a spokesman for the insurgents told Russia's Interfax news agency, which said at least five members of the pro-Russian forces had been severely injured.

The Ukrainian army began a major offensive against separatists in eastern Ukraine on Friday, focusing on Slovyansk. The attack claimed at least nine lives, including two Ukrainian servicemen who died when rebels shot down two army helicopters using surface-to-air missiles.

The city was also where a number of observers from the Organization for Security and Cooperation in Europe (OSCE) were freed on Saturday after being captured by rebels.

The fighting in Slovyansk comes days after 42 people died in clashes in the Ukrainian Black Sea city of Odessa.

OSCE chairman to meet with Putin

In a potentially significant move, the OSCE head, Swiss Foreign Minister Didier Burkhalter, will head to Moscow on Wednesday for talks with Russian President Vladimir Putin.

That meeting was announced by the Kremlin following a phone call between Putin and German Chancellor Angela Merkel. "Putin and Merkel stressed the importance of effective international action - especially by the OSCE - in reducing the tensions in Ukraine," Moscow said in its statement.

On Sunday, German Foreign Minister Frank-Walter Steinmeier called for another international conference in Geneva, and suggested that OSCE observers should mediate at a local level across Ukraine to end the violence.

It comes as Ukraine and Russia continue to accuse each other of undermining a previous deal reached in Geneva on April 17, that included the disarming of militants, the departure of activists from occupied public buildings and a Ukrainian national dialogue on constitutional reform.

Steinmeier said a second conference would be "finally to make clear agreements on how we can put an end to this conflict and gradually move towards a political solution."

There was "no disagreement between the Chancellor and the Federal foreign minister," in regards to a proposed second meeting, said Steffen Seibert.

"We want the same thing. There is no difference in our attitude," Seibert said.

Seibert also said a refendum planned in Donetsk next week by pro-Russian separatists would exacerbate the Ukraine crisis and violate the constitution.

"Such a referendum, against the Ukrainian constitution, does not calm things down but escalates them," Seibert said. He said the people who had called vote had no democratic legitimacy.

The proposed succession referendum for May 11 could complicate the Ukrainian presidential election, scheduled for May 25.