Ukraine: ′Military operation begins in eastern city of Slovyansk′ | Europe | News and current affairs from around the continent | DW | 02.05.2014

Ukraine's interior minister has said government forces have launched a military operation to regain control of the eastern city of Slovyansk from pro-Russian separatists. He said one helicopter pilot has been killed. 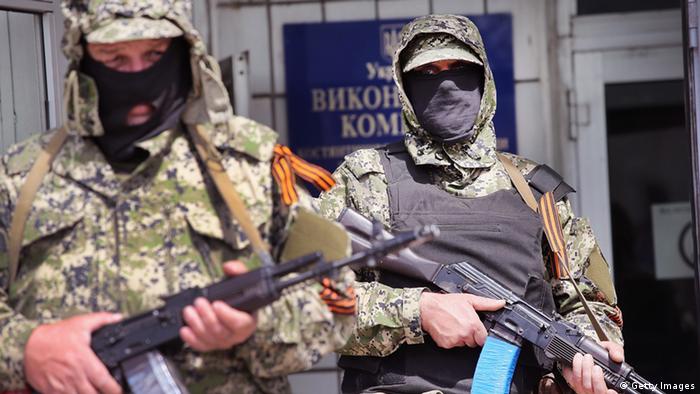 Ukraine's interim Interior Minister Arsen Avakov said a pilot was killed Friday after separatists used anti-aircraft missiles to shoot down a Ukrainian military helicopter in the city of Slovyansk.

"Against Ukraine's special forces, terrorists used heavy artillery, including grenade launchers and portable anti-aircraft missile launchers. One pilot is dead and there are wounded," Avakov posted on his Facebook page.

Reports of a "large-scale operation" by Ukrainian forces to capture the city were originally reported by pro-Russian separatists around 6:30 a.m. local time (5:30 UTC).

The Russian news agency Interfax has quoted the self-declared mayor of Slovyansk, Vyacheslav Ponomaryov, as saying two military helicopters were shot down. He said one pilot was killed and another taken hostage.

Heavy gunfire and blasts have been heard on the city's outskirts and a helicopter was seen opening fire.

The city of around 100,000 residents has been a stronghold for pro-Russian separatists who control dozens of government buildings across Ukraine's east.

The operation is the Ukrainian military's first significant response since it launched an "anti-terrorist" operation in early April.

Moscow has warned Ukraine against any attack on protesters in the region.

Activists in Slovyansk are currently holding seven observers from the Organization for Security and Cooperation in Europe (OSCE). The monitors from Germany, Denmark, Poland and the Czech Republic were detained last week.

German Chancellor Angela Merkel appealed to Russian President Vladimir Putin on Thursday to use his influence to force their release.

The reported operation comes a day after Ukraine's interim President Oleksandr Turchynov signed a decree reintroducing military conscription. He said the move was designed to tackle the "naked aggression" of pro-Russian separatists who were threatening the country's "territorial integrity."

Separatists are attempting to force the region's secession from Ukraine. Some are hoping to follow in the footsteps of the Crimean Peninsula and hold a referendum on joining the Russian Federation.

Several Western nations have accused Russia of orchestrating the unrest in order to justify a military intervention. However Moscow has strenuously denied the allegations.

Eastern Ukraine, which is made up of a large Russian-speaking population, was the heartland of support for former president and Kremlin ally, Viktor Yanukovych, who was ousted in February.