In a bid to boost its ailing economy, Mongolia is refocusing its foreign policy on its traditional partners Russia and China. But experts warn Ulan Bator runs the risk of becoming increasingly dependent. 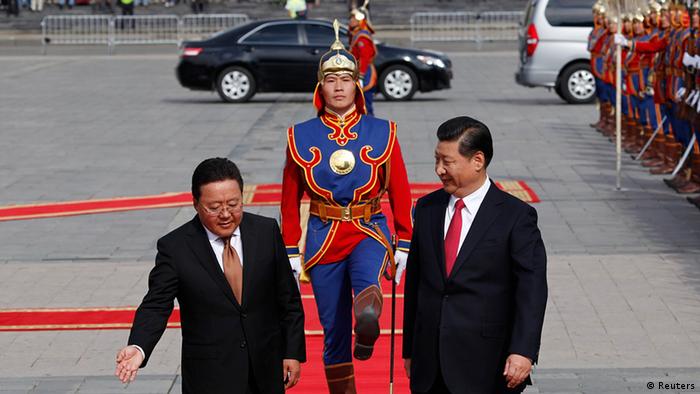 Seeking to transform bilateral ties into a comprehensive strategic partnership, Russia's President Vladimir Putin is scheduled to pay a state visit to Mongolia on September 3. Topping his agenda will be trade and infrastructure. Like neighboring China, Russia is seeking to benefit from Mongolia's globally significant mineral resources, and it is likely to back this by extending financial support for the development of Mongolia's infrastructure which, according to analysts, is Ulan Bator's overriding strategic domestic priority.

Other issues during the visit will revolve around boosting bilateral investment as well as the oft-mooted proposal to build an oil and gas pipeline from Russia to China through Mongolia, say experts.

"Simply by sending a top-level delegation, Russia is sending a signal that it will continue to take an interest in the Central Asian nation, Neil Ashdown, a Mongolia expert and senior Asia-Pacific analyst at IHS, a global information and analytics firm, told DW.

The visit comes less than two weeks after his Chinese counterpart Xi Jinping embarked on a two-day trip of the resource-rich nation, becoming the first Chinese head of state to visit the landlocked country in more than a decade. Among other things, China and Mongolia signed a host of trade deals and pledged to almost double their annual bilateral trade to 10 billion USD by 2020. China also agreed to give Mongolia access to ports in its north and northeast, according to state-run news agency Xinhua.

Mongolia, a nation about the size of Alaska with a population of some 3 million, relies on Russia for 76 percent of its gasoline and diesel fuel and much of its electric power. Bilateral trade turnover reached more than 1.6 billion USD in 2013, with Moscow playing an important role in the country's coal, silver, and uranium mining sectors. 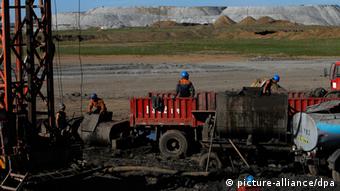 Mongolia's economic growth rate fell to 5.3 percent in the first half of 2014, it's weakest pace since 2010

However, Beijing still remains by far Ulan Bator's largest economic partner with bilateral trade reaching 6 billion USD last year. China is also the biggest source of imports for the Mongolian economy. Minerals make up the majority of those exports, primarily copper and coal.

During the Cold War, Mongolia was under Soviet influence. But following the collapse of the Soviet Union and the loss of subsidies from Moscow in the 1990s, the Central Asian country transformed itself into a democracy and a market economy, adopting a "third neighbor" policy to court nations such the United States and Japan and reduce its reliance on its two giant neighbors.

But after registering a GDP growth rate of 17.5 percent as recently as 2011, Mongolia's economy has been witnessing a slowdown lately, expanding 5.3 percent in the first half of 2014, the weakest pace since 2010. But there is more: foreign direct investment (FDI) dropped by 70 percent in the first half of 2014, the value of the currency has fallen steadily and inflation is in double figures. As a result, analysts expect GDP growth to fall to 9.4 percent in 2014, down from 11.5 percent in 2013.

While the government has responded to criticism from foreign investors, taking steps to improve the regulatory environment, this has not been enough to attract investors back. Resource nationalism has become a contentious issue in Mongolia in recent years, with the country tightening approval requirements for foreign companies seeking to do business in "strategic" sectors such as minerals in 2012.

Ashdown explains that an ongoing dispute with mining corporation Rio Tinto over the proposed expansion of the Oyu Tolgoi copper mine remain a sticking point to this day: "Until this dispute is resolved, it is unlikely we will see a significant reversal of the downturn in foreign investment." 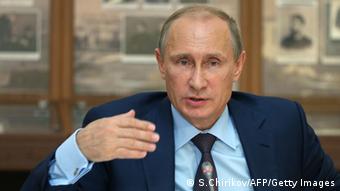 Pivot to Beijing and Moscow

It is important to point out, however, that Mongolia's "third neighbor" policy, as the name suggests, has never been about replacing Russia and China. "Mongolia has consistently attempted to balance the influence of its two neighbors, while supplementing this with the support of countries like Japan, South Korea, Canada, and the United States," Ashdown told DW, adding that Ulan Bator is likely to continue to pursue the broad outline of this policy.

What has changed over the last year, he points out, is that the decline in investor confidence in the country, and the downturn in its economic indicators, has reduced Mongolia's room for maneuver in its foreign policy.

"Where in the past Mongolian policymakers and parliamentarians might have been willing to accept a lower economic return on a project in return for supporting the diplomatic goal of maintaining a broad base of relations, they are now likely to be driven more by the bottom line," the analyst stated. As such, "for as long as it's economic situation remains comparatively unfavorable, we are likely to see Mongolia lean towards China in particular, but also Russia" said Ashdown.

As a result, Beijing and Moscow have become more important than ever for Ulan Bator and both seem increasingly willing to further tap into Mongolia's natural resources estimated at around 1.3 trillion USD. Nadine Godehardt, Asia expert at the German Institute for International and Security Affairs (SWP), believes this is especially true for China given the quick pace of its economic development.

One crucial obstacle, however, remains Mongolia's underdeveloped infrastructure connections with its two neighbors. The main rail line runs north-south, connecting Russia and China. There is a second line in eastern Mongolia that connects to the Russian rail network.

However, the mineral-rich southern belt of the country is largely unserved by rail infrastructure, making Mongolia's mineral exports less competitive. For instance, in the absence of rail connections, coal is currently trucked to loading stations and then to the Chinese border, an expensive and time consuming process, Ashdown explains.

With an abundance of minerals and one of the world's fastest growing economies, Mongolia is a hotspot for mining companies. But, lawmakers are struggling to ensure the environment doesn’t pay a heavy price. (01.04.2014)

In the past, all Chinese presidents made an official visit to North Korea before going to South Korea. Xi Jinping's break with this tradition has irritated North Korea - but even more so the US, says DW's Frank Sieren. (08.07.2014)

Putin in China: A win-win situation for Beijing

China's importance for Russia has grown in the wake of the Ukrainian crisis as Russian President Vladimir Putin arrives in Beijing aiming to close a multi-billion dollar gas supply agreement. (20.05.2014)

Of major significance for cross-border trade would therefore be the expansion of rail links into China. This is why Mongolia is building a railway line from one of its largest coal deposits to the Chinese border. The key issue, however, is the gauge used for the line. In recent years, Mongolia hasn't been able to decide whether to favor the narrower Chinese rail gauge or the Russian one inherited from Soviet times.

In the meantime, the intensifying relations between the three nations might well go beyond trade and commerce, as analysts point out. "Mongolia offers Russia and China an opportunity to meet each other - quite literally - in the middle," says Ashdown.

The key issue for both sides will be the extent to which their visits are seen as promoting trilateral co-operation over bilateral competition over Mongolia. During his visit, Xi Jinping signed an agreement endorsing Mongolian President Tsakhiagiin Elbegdorj's call for a trilateral summit with Russia, and Beijing will be expecting Putin to support this call.

"The potential is there for Russia and China to focus their support of Mongolia's economic and infrastructure development in a way that also strengthens their relationship. The development of the north-south rail network connecting Russia and China through Mongolia is one example, as is the proposal for an oil and gas pipeline running across Mongolia," said Ashdown.

But there may be other advantages for Mongolia. As Godehardt explains, Chinese President Xi Jinping has shown his interest in pushing forward Mongolia's integration in trans-regional alliances such as APEC as well as regional organizations like the Shanghai Cooperation Oganization SCO.

"APEC would give Mongolia a chance to enhance cooperation with a range of other countries and partly pursue its long-term third-party neighbor policy. At the same time Mongolia, which has been an observer at the SCO for over 10 years now, might be accepted as a full-fledged member state at the upcoming SCO Summit on September 11-12 in Dushanbe, Tajikistan," Godehardt told DW.

But there are also risks involved for Mongolia. Although Mongolians have historically been ambivalent about their country's relationship with its two neighbors, analysts fear that closer ties to Russia and especially China might render the country over-dependent. During his visit to Mongolia, Xi Jinping told reporters China would always respect its neighbor's independence, territorial integrity and the right to make its own decisions. 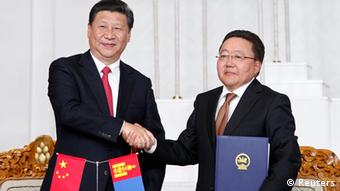 Nevertheless, analysts like Ashdown believe that, in reality, Ulan Bator will remain heavily dependent on Beijing as an export destination and that it is unlikely that the majority of goods crossing Mongolia's southern border will be going anywhere other than to China.

This view is shared by Godehardt who argues that this dependence might even extend to political issues. As a way of balancing things out and keeping its neighbors out of domestic politics, Godehardt believes joining the SCO forum could turn out to be an interesting mechanism for Mongolia.

However, the analyst warns this move may harm the nation's ties with third countries. "SCO membership could taint the country's international image in Europe and the US where the organization is regarded as a 'club of authoritarian states,'" said Godehardt.