China′s foreign relations: pragmatism over ideology | World | Breaking news and perspectives from around the globe | DW | 08.07.2014

In the past, all Chinese presidents made an official visit to North Korea before going to South Korea. Xi Jinping's break with this tradition has irritated North Korea - but even more so the US, says DW's Frank Sieren. 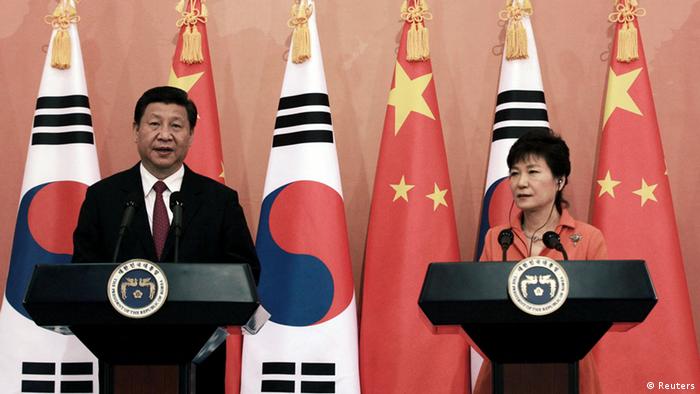 At the same time, it's easy to note that the Chinese state and party leader's first visit has taken him to his closest ally's biggest enemy. This is old Cold War thinking - which has made an astonishing comeback in the last few months.

China speaks to everyone

The situation is more complex than that. On the one hand, divided Korea is the only region in the world apart from Cuba that continues to be shaped by the Cold War even today. China and the communist north fought against the US-backed South. Ever since, communist North Korea has been a Chinese ally, whereas the capitalist south and the US stand side by side. Although the war ended more than half a century ago, officially there is no peace between the two Koreas.

On the other hand, Beijing has had good ties with South Korea since 1992 - China never followed the US-Soviet Cold War rules. Mao first let Stalin help him, then they had a falling-out, then he led the movement of non-aligned countries - and, finally, he began to flirt with the Americans.

His successors have also built close relations with the Europeans - which hasn't stopped them from forging close ties with Iran, Syria and Sudan. Currently, China is doing brisk business with Russia - at a time when that country suffers from western sanctions.

Every other new Chinese president visited North Korea first, and then South Korea afterwards. That's what state and party leader Jiang Zemin did in 1995, and his successor Hu Jintao in 2005.

But China's current president has taken a new approach here just like he has in many other areas. He made his inaugural visit to South Korea's capital Seoul last week, where he also met with South Korean President Park Geun-hye.

The visit reflects China's pragmatic communist tradition: communists or not, if it's for the good of China, others partners can be accepted, too. Even though North Korea keeps the Americans away from the Chinese border, it is still a difficult friend. South Korea, on the other hand, lists China as its largest trading partner: about 25 percent of South Korean exports go to China. This is worth more than Kim Jong-un's brotherly kiss.

So although the visit is a snub of sorts, Xi isn't betraying North Korea. He is having a moderating effect on South Korea - and, unlike South Korea, he adheres to neutral phrases. President Park always speaks of the "North Korean nuclear problem," while President Xi continues to refer to the "denuclearization of the Korean Peninsula" - even though South Korea does not have any nuclear weapons. President Park says the north must be deterred from its nuclear program "by all means," while Xi focuses on negotiations.

Relations between Japan and South Korea are currently tense. But China recently hosted reconciliation talks between Japan and North Korea, which had a very positive outcome for North Korea: Japanese Prime Minister Shinzo Abe has lifted some of the main bilateral sanctions against the country. In return, North Korea plans to help along an investigation into the kidnappings of Japanese citizens several decades ago.

Lifting the sanctions takes the burden off China's shoulders, but it's displeasing the Americans. In addition, Beijing has played a part in Russian President Vladimir Putin's decision to cancel North Korea's $10 billion (7.4 billion euro) debt from the Soviet era.

China's goal is clear: to soften the US's inflexible stance on the North Korean issue, since the Iranian case has shown that this is possible. But this is not the only reason why the US feels even more snubbed than North Korea by the Chinese president's visit to South Korea. On the whole, the US's relationship with East Asian countries is becoming more difficult. Japan and South Korea are its closest allies in the region, but the relationship with Japan is deteriorating as Japan's nationalistic Prime Minister Abe increasingly focuses his attention on domestic matters.

Tearing South Korea away from the US

Now, Beijing is trying to establish closer cooperation with Seoul at the expense of the US. This was the most important aim of President Xi's South Korean visit. It also makes Xi look flexible, since he chose to travel to the south before the north. The chance to improve relations between the two countries has never been better, both politically and economically.

Both China and South Korea were victims of Japanese aggression during World War II; both are concerned about the nationalistic course the current Japanese government is taking. And both are criticizing Prime Minister Abe's reinterpretation of the Japanese constitution against the will of the people but with support from the US. Now, the Japanese army has the permission to defend allied states in case of an attack by a third party. This is another tactical error by the US.

In terms of the economy, South Korea's trade with China is as robust as it is with Japan and the US combined. Thanks to a $5 billion (3.7 billion euro) investment by South Korean electronics and engineering giant Samsung, South Korea the largest foreign investor in China last year.

This year, China and South Korea are working on establishing a free trade zone between the two countries. Meanwhile, South Korean President Park plans to contribute to the Asian Development Bank - which sees itself as a rival of the US-dominated World Bank - under Chinese supervision. The two countries are keen to close more business deals in yuan and won, not US dollars - until now, 90 percent of Chinese-Korean business transactions have been in US dollars. Overall, South Korea's economic ties with China are taking priority over security-related connections with the US.

Demonstrating will to cooperate

This is the most important outcome of President Xi's visit to South Korea. The second most important message is to China's neighbors. China is currently under fire for its coarse dealings with neighboring states. Hardly a week goes by without some confrontation between China and another Asian country. Off the Philippine coast, ships are blocking each other's paths because China is determined to drill for oil there without the Philippines' permission. At the same time, Beijing is in strife with Japan over a group of islands in the East China Sea.

Then China also has quarrels with Brunei, Malaysia and Taiwan. And even with South Korea: there was a dispute about overlapping flight-control zones off the South Korean coast.

Now, with his visit to South Korea, Xi aims to prove one main point: we don't need to just jostle - we can also work together constructively.

DW correspondent Frank Sieren is considered a leading German expert on China. He has lived in Beijing for the past 20 years.

Germany and China: A special relationship?

How much China means to Germany is obvious given the number of trips Chancellor Merkel has made to the country: seven. But that number also shows just how hard it is to deal with the increasingly assertive Asian giant. (04.07.2014)