Monarchies band together in the wake of Arab Spring | World | Breaking news and perspectives from around the globe | DW | 09.11.2011

The democratic revolutions in the Arab world and Northern Africa have recalibrated alliances in the region. So who is cozying up to whom, and can new ties help conservative states to survive the upheaval? 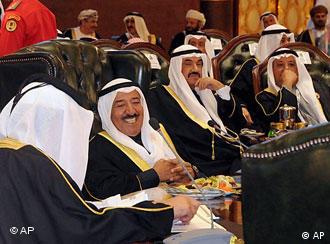 The GCC brings together a number of Sunni monarchies

More or less lost among all the headlines generated by the Arab Spring was the news last May that Jordan and Morocco were being invited to join the Gulf Cooperation Council (GCC), a political and economic union that includes Bahrain, Kuwait, Oman, Qatar, Saudi Arabia and the United Arab Emirates.

In one sense the offer was bizarre since neither Jordan nor Morocco border on the Persian Gulf, as the existing member states do. Morocco is indeed some 5,000 kilometers (3,100 miles) away. That's a bit like Brussels asking Thailand to join the EU.

But the offer to join forces was less about economics than stability. Like the GCC states, Jordan and Morocco are both monarchies, and the two nations' ruling families are popular enough among their subjects to have avoided the mass uprisings that toppled rulers in Egypt, Tunisia and Libya.

In general, monarchies have proven more resilient than other forms of state in the region. Among the eight states ruled by royal families in the Arab World and North Africa, only Bahrain has been hit with serious popular rebellion.

Indeed, monarchism seems to have won the unofficial competition with the other most prevalent form of state in the region, charismatic dictatorship. Masses of people in Tunisia and Libya rose up against their respective despotic rulers, and despite brutal repression of protestors, a change of power may be on the way in Yemen and Syria as well.

"It's difficult to say how long the Syrian regime can survive," Sadik Al-Azm, Syrian philosopher and fellow at the Käte Hamburger Institute at the University of Bonn, told Deutsche Welle. "In a certain respect, it's already done in. The system of [Syrian President Bashar] Assad can no longer turn back the clocks after everything that's happened."

Dictatorships in the guise of "republics," such as the Assad regime or Gadhafi's in Libya, arose in the 1950s and 1960s under the influence of the Cold War. Now, 20 years after the fall of the Berlin Wall, many in the region think they are hopelessly obsolete.

But can Saudi-style monarchism really be an alternative for the future? 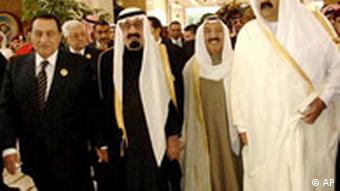 The downfall of Mubarak, left, has shaken up the region

Another factor prompting new alliances is the fact that the Arab Spring has, at least temporarily, dissolved old ones. When Egyptians overthrew their long-time president Hosni Mubarak earlier this year, Saudi Arabia lost a crucial partner.

Egypt is not only the most populous country in the region. It was also a pro-Western, Sunni nation that helped Saudi Arabia offset the influence of Saddam Hussein's Iraq and the pro-Iran fraction that includes Syria, Hezbollah in Lebanon and the Hamas movement in the Palestinian territories.

It remains unclear which political direction post-Mubarak Egypt will take. So it's hardly surprising that Saudi Arabia, which as the home of holy sites like Mecca claims a leading role in the Islamic world, is looking for new allies.

The GCC is a logical instrument for trying to secure more influence, especially as it was aimed from its very inception in 1981 as a hedge against Shiite Iran and the various charismatic dictatorships with their communist backgrounds.

And with the Arab Spring revolutions reshuffling the political deck in the region, the GCC as a whole, and particularly member states like Saudi Arabia or Qatar, have been growing in international importance.

After the fall of Mubarak, the Saudi ruling family took steps to shore up their own position domestically. With a combination of social benefits increases, moderate reforms such as giving women limited voting rights and threats of crackdowns, the government in Riyadh has managed to hinder the sort of popular protests that have arisen elsewhere in the region.

Further afield, the GCC supported the ultimately successful efforts of Libyan rebels to topple Gadhafi, always something of an outsider and loner in the region. More recently, the bloc has also been trying to provide aid to Syrian dissidents, perhaps in hopes of disrupting Syria's traditional ties with Iran and ending the dominance of the Alawites, to which the Assad family belong, in favor of Sunni Syrians.

The growing presence of Saudi Arabia on the international stage might give the impression that the country is aiming for the sort of regional predominance enjoyed by Egypt under Gamal Abdel Nasser in the 1950s and ‘60s. 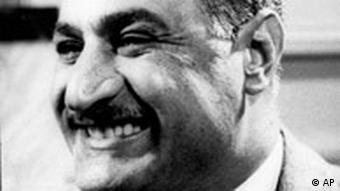 But experts say the obstacles to such power are many.

"Since Nasser's death [in 1970], no one power has succeeded in becoming the undisputed leader of the community of Arab states," Henner Fürtig, the director of the GIGA Institute for Near East Studies, told Deutsche Welle. "Saudi Arabia couldn't assert its dominance either. So the Saudis have to find allies."

"Many Arab states are reorienting themselves," Fürtig continued. "Egypt has headed down a new political road so it's difficult for Saudi Arabia to find appropriate partners."

If Egypt regains a measure of domestic stability, it is likely Cairo will claim its former influence, potentially creating conflict with its traditional ally, Saudi Arabia. And post-Saddam-Hussein Iraq remains a wildcard, with no one knowing how the multi-confessional and - ethnic country will align itself between the regional powers Saudi Arabia and Iran.

What is clear is that the traditional Sunni monarchy in Saudi Arabia and the revolutionary Shiite theocracy that rules Iran will be battling it out for preeminence in the oil-rich region in general and on the Persian Gulf specifically.

Saudi Arabia has a strategic position of power on the Arabian Peninsula. Expert Steffen Hertog talks to DW about Saudi efforts to shield itself from revolutionary tendencies in the region and build up new alliances. (09.11.2011)

The regime of Syrian President Bashar al-Assad continues to send contradictory signals as it attempts to contain and control the protest movement which is threatening its grip on power. (04.11.2011)