The Moldovan parliament has backed a no-confidence vote in the government of Prime Minister Valeriu Strelet. The dismissal comes on the heels of massive bribe and corruption allegations against the pro-EU government. 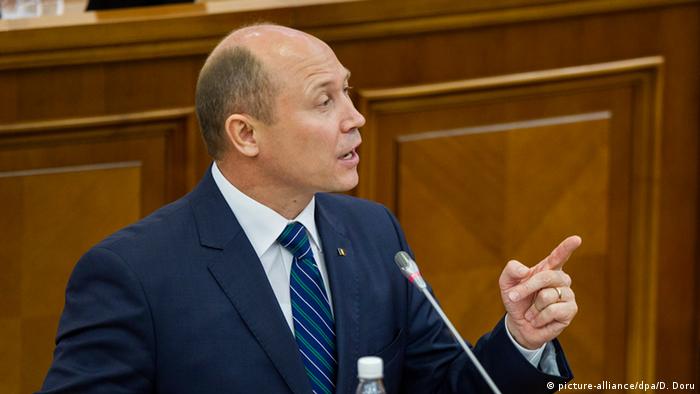 In a blow to the pro-European coalition, 65 lawmakers in the 101 seat parliament voted to remove Strelet's government on Thursday.

The small former Soviet state has gone through months of tension amid a banking fraud scandal that allegedly swindled up to $1.5 billion (1.3 billion euros) - equivalent to one-eighth of GDP - in Europe's poorest country.

Opposition pro-Russian communist and socialists, who filed for the no-confidence vote, have 44 seats in parliament, and were joined Thursday by the government's coalition partner, the Democratic Party.

Thousand of people protesting corruption have been camped out in Chisinau since September demanding accountability and the government's resignation. But tensions within the ruling coalition boiled over after the October 15 arrest of Vlad Filat, the prime minister from 2009 to 2013, on charges of taking bribes worth $260 million (237 million euros).

That sum was only a part of a $1.5 billion bank fraud that went missing before the 2014 elections in what has been termed "the robbery of the century."

Strelet, from the same Liberal Democratic Party of Moldova (LDPM) as Filat, has denied any wrongdoing. Before Thursday's vote said, he would not step down as that would amount to his admission of guilt and hurt the country's negotiations with the International Monetary Fund. Strelet, in office since July, is the third prime minister this year.

Democratic Party leader Marian Lupu has called on Strelet to resign, but said he would like to form another pro-European coalition government.

Filat was arrested after Renato Usatii, the pro-Russian mayor of Balti, leaked a telephone conversation between a businessman and the former prime minister. In the conversation, Filat asked for bribes from the businessman, Ilan Shor, who is also accused in the banking fraud. 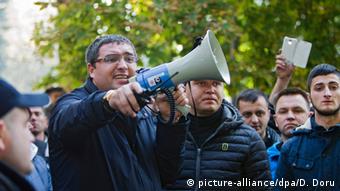 Usatii does not have a seat in parliament, and his Our Party was barred from the 2014 parliamentary elections because it received money from abroad. He was briefly arrested on illegal wiretapping charges before being released earlier this month.

Usatii has said he revealed the conversations for the public interest and has further proof of corruption at the highest levels of government.

The corruption scandal has tarnished the image of Moldova's pro-European parties and weakened European integration in the face of communists and socialist who favor closer economic relations with Russia.

The corruption scandal has also held up financial support from international lenders that keep the economy afloat.

Protesters in the ex-Soviet country have called for the government to resign over the disappearance of $1.5 billion from banks. The demonstrations were organized by two pro-Russian parties in the nation's capital. (27.09.2015)

As Ukraine rages next door, Moldova is building up arms

The Republic of Moldova is planning to purchase modern defense technologies and set up a new military base. The new government in Chisinau is hoping for help from partner states. (20.04.2015)

The EU's summit with a number of former Soviet republics will likely disappoint some participants. Brussels is simply not willing to take the steps that Kyiv and Tiflis had hoped for. (20.05.2015)