As Ukraine rages next door, Moldova is building up arms | Europe | News and current affairs from around the continent | DW | 20.04.2015

As Ukraine rages next door, Moldova is building up arms

The Republic of Moldova is planning to purchase modern defense technologies and set up a new military base. The new government in Chisinau is hoping for help from partner states. The Republic of Moldova plans to radically modernize its armed forces, new Defense Minister Viorel Cibotaru has announced. He is expecting external assistance in this endeavor. In a television interview, Cibotaru said he hoped that, in light of the complicated geopolitical situation caused by a civil war raging in neighboring Ukraine, his country's partners would be interested in making Moldova's army more efficient. According to the minister, the military should be capable of operatively intervening in emergencies.

The minister's announcement comes at a time when the budget for the army amounts to barely 0.3 percent of gross domestic product and is hardly sufficient for soldiers' food and lodging.

Recently, Moldova presented specific suggestions for a NATO initiative that could lead to defense improvements. Combat in Ukraine's civil war has consistently come closer to Moldova's border. "It is our wish that the Republic of Moldova take part in a solution to the problems ensuing from the current geopolitical situation," Cibotaru said. This includes training the military and technical assistance.

The minister announced that by 2018 a new military base would be set up that would "look completely different than the old Soviet barracks" remaining in Moldova, a former Soviet republic. The country particularly needs new artillery. Cibotaru says that threats from the fighting in Ukraine have made necessary a new political debate about Moldova's current neutral status. 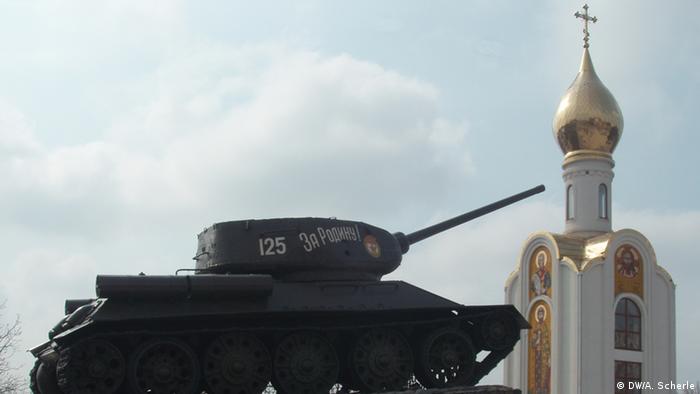 A Soviet WWII tank in Trans-Dniester

The Communist Party, on whose support the minority government of new Prime Minister Chiril Gaburici relies, does not view the rapprochement with NATO favorably. Vladimir Voronin, Moldova's president from 2001 to 2009 and the head of the pro-Russia Communists, has threatened to withdraw his party's support for the new government. During his time in office, Voronin had cut the army by 2,000 soldiers to 6,500 and even proposed its dissolution to signalize his country's neutrality to Moscow.

The Moldovan political scientist Ion Manole, of the nongovernmental organization Promo-Lex, sees closer cooperation with NATO as the only possibility for guaranteeing national security. "The Republic of Moldova is a small country and cannot protect itself on its own from external aggressors," Manole told DW. A major problem is the presence of three armies on Moldovan territory: the national army, the army of the separatist region Trans-Dniester and Russian units that are stationed in Trans-Dniester, which has not been internationally recognized by any state and is still part of Moldova under international law but is openly supported by Moscow. Under these conditions, Manole said, the security and stability of his country are at risk. A modernization of the Moldovan army would serve the purpose of defense, he added.

Former Defense Minister Victor Gaiciuk has spoken in favor of modernizing the armed forces, yet he, too, has criticized Moldova's rapprochement with NATO. He told DW that Moldova should maintain its neutral status, which would be internationally guaranteed by the UN, the Organization for Security and Cooperation in Europe, the United States, Russia and the EU. "This would make Moldova attractive to both the East and the West, and would help clarify the Trans-Dniester issue," Gaiciuk told DW. Thus, Russia would have no more arguments for stationing its troops on Moldovan territory, Gaiciuk said.

The condition of the Moldovan army has been called deplorable. It consists of 5,300 soldiers. According to official figures, if there were an emergency, some 700,000 Moldovans could be called to arms, but critics doubt this number. Besides, the weapons are old and in poor condition - most of them from the inventory of the former Soviet army.

On the other hand, Trans-Dniester has more than 7,500 soldiers whose equipment has been modernized with the help of Russia. In addition to this, there are approximately 2,000 Russian soldiers with modern weaponry stationed in the separatist region since the split from Moldova.

Russia's president wants to establish a country that's united internally and that showcases its strength to the world beyond. The former Soviet Union is seen as a natural imperial framework, says historian Gerd Koenen. (02.04.2015)